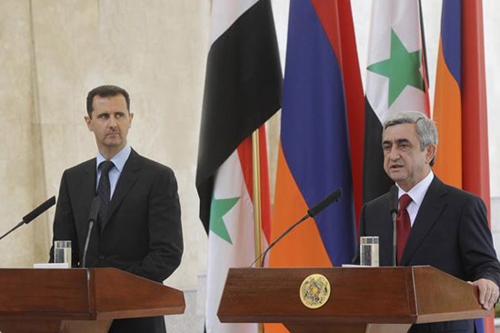 Is the Sargsyan government doing all it can for Syrian Armenians? (Photo: Armenian Presidential Press Service)

Many ethnic Armenians are disgruntled after fleeing the embattled Syrian city of Aleppo for the safety of Armenia. They say they have been left to fend for themselves in the country they view as their ethnic homeland. Armenian government officials, meanwhile, insist they are doing what they can to accommodate diaspora members.

Roughly 100,000 ethnic Armenians, descendants of the survivors of Ottoman Turkey’s World-War-I-era massacre of ethnic Armenians, are estimated to live in Syria, most of them in Aleppo. A tiny sliver of that number – 6,248 individuals, based on Armenian visa and passport applications from Syrian citizens – appear to have left for Armenia since January 2012, according to Armenian government data.

As one of the first Diaspora groups to form after the massacre, the Aleppo community is among the strongest of Armenia’s far-flung Diaspora networks.

Nonetheless, members of the Aleppo community face numerous obstacles as they try to adjust to life in Armenia proper. The problems start with the price of plane tickets to Yerevan from Aleppo on the Monday flights offered by Armenia’s state-run Armavia Airlines. It’s the only regional airline, as of July 30, reportedly still flying into the city. Since early July, ticket prices on Armavia – only round-trip tickets are sold -- have increased by 58 to 63 percent to 180,000 to 190,000 drams ($442 to $466.50).

The prices and lack of one-way tickets have fueled accusations that Armavia is engaging in price gouging, taking advantage of the violence that has cut off other exit routes from Aleppo. Flights on Syrian Air to Yerevan have been sold out for months; on Armavia, they are sold out until September, Yerevan travel agencies said.

In comments to EurasiaNet.org, senior Armavia executive Isabella Muradyan conceded that the fighting in Aleppo is “a very important circumstance,” but attributed the “fluctuations” in ticket prices to Yerevan to “the euro rate and fuel prices.” [International airline fares are calculated based on an International Air Transport Association currency pegged to the US dollar, and then converted into the local currency – ed].

As criticism of Armavia’s prices started to gain traction, the airline and the Armenian government announced on July 26 that flights from Aleppo would increase “soon” to twice per week and would be “almost free of charge.” The government indicated that it might subsidize ticket prices by 100,000 drams ($245.52) per ticket.

Syrian citizens are now allowed to obtain Armenian visas at the border, and Armenian passports within Syria, rather than in Yerevan alone.

Upon arrival, though, they still face an uphill struggle to reestablish a normal routine, refugees from Aleppo told EurasiaNet.org. “We got no assistance at all from the Diaspora Ministry or the government,” commented 23-year-old Mkrtich Nersesian, an economist now working in Yerevan as a snack-bar cashier.

With unemployment one of Armenia’s thorniest problems (unofficial jobless rates soar into the double digits), employment options are slim, and depend on locals’ assistance. Many Syrian-Armenians work in catering or retail stores, where job vacancies are more frequent.

Networking is also the key to finding an affordable apartment to rent or place to stay. The Diaspora Ministry says it only organizes and forwards assistance requests to the relevant ministry. “Everybody now is relying on their own resources,” said 21-year-old Karo Kzirian, a recent arrival from Aleppo.

There are also challenges connected with cultural assimilation. Like Iranian-Armenians, often referred to as “Persians,” Syrian-Armenians can face discrimination.

Ministry representatives have not visited Syria since 2010, according to the ministry’s website, which names “collective power” as the “salvation” of ethnic Armenians.

The criticism of the government is gaining a political dimension. Vartan Oskanian, an MP for the semi-oppositional Prosperous Armenia Party and a native of Aleppo, charged in early July that the Aleppo Armenians “do not feel the support of their homeland at all.”

On his Facebook page, Oskanian, a former foreign minister, claimed that no Armenian government official has visited Syria since February to evaluate the situation. “The Armenian state has no right to delay.”

The Armenian government in Yerevan is approaching the strife in Syria with caution in part because officials may be concerned about who could replace Assad, in the event his regime falls. Relations between Yerevan and Damascus have generally been warm; in 2009, President Bashar al-Assad and his wife, Asma, paid an official visit to Yerevan.

Many Syrian-Armenians respect Assad, saying that his family has supported ethnic Armenians’ interests as a Christian minority group in a predominantly Muslim country. When it comes to the treatment of the Armenian community in Syria, life under Assad might be more tolerable than what might follow him.

One senior MP from the governing Republican Party of Armenia emphasized the need for caution in tackling the question of Aleppo’s ethnic Armenians. “We cannot interfere and evacuate Syrian-Armenians … this can further increase the tension; the terrorist attacks may target our compatriots’ neighborhoods next,” said Hovhannes Sahakian in an apparent reference to Syrian rebel fighters. “The situation is very delicate, and we must be on the alert.”

“The government is taking steps and is going to boost the measures” to help Syrian-Armenians, Sahakian added, without elaborating. Not all “measures require public announcements,” he added.

Whether public or private, the measures can come none too soon for many of Aleppo’s ethnic Armenians. “We helped Armenia when it needed [us],” commented refugee Shaghik Rastkelenean. “Now it’s time Armenia supports us.”