Armenia and Azerbaijan agree to truce

The truce, brokered by Russia, is aimed at allowing the two sides to exchange prisoners and bodies. It will be the first respite in nearly two weeks of fighting. 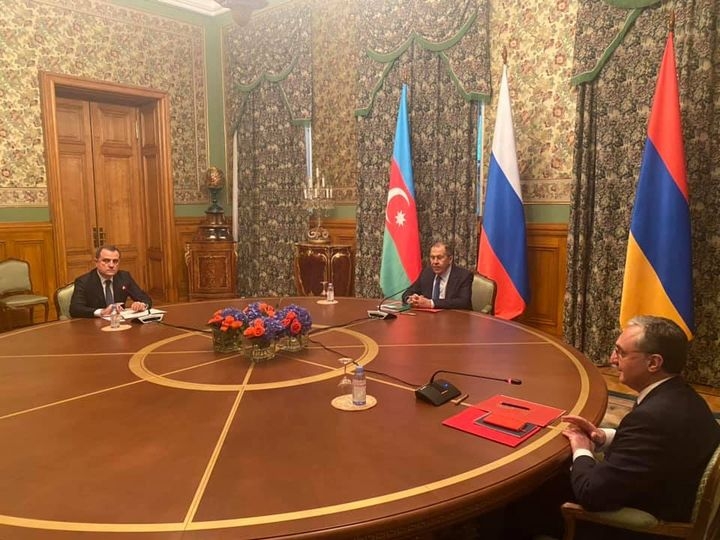 This story has been updated to reflect that an agreement was reached.

Armenia and Azerbaijan have agreed on a truce in order to exchange prisoners of war and the bodies of killed soldiers, the first respite in nearly two weeks of heavy fighting.

The agreement was reached after 10 hours of negotiations in Moscow between the foreign ministers of Armenia, Azerbaijan, and Russia. They were the first diplomatic talks between the two sides since fighting broke out September 27.

Russian Foreign Minister Sergey Lavrov announced the agreement after 4 a.m. Moscow time on October 10. The truce was to go into effect at noon that day and the bodies and prisoner exchange will be mediated by the International Committee of the Red Cross.

There were three other provisions in the official announcement: "2. Specific parameters of the ceasefire will be additionally agreed; 3. The Republic of Azerbaijan and the Republic of Armenia, through the mediation of the OSCE Minsk Group co-chairs, launch substantive negotiations for the soonest peaceful settlement of the conflict on the basis of the basic principles of the settlement; 4. The parties confirm the immutability of the negotiation format."

It's not clear what the second provision might refer to. The third held out the possibility that peace talks may resume, though the prospects for that happening any time soon remain dim. The fourth was significant in light of both sides' increasing attempts to cast the Minsk Group, which has been mediating the negotiations for nearly three decades, as a body incapable of carrying out that task any more.

The meeting in Moscow came after Russian President Vladimir Putin spoke on October 8 with both countries’ leaders – Armenian Prime Minister Nikol Pashinyan and Azerbaijani President Ilham Aliyev. Following those talks he invited the foreign ministers, Jeyhun Bayramov of Azerbaijan and Zohrab Mnatsakanyan of Armenia, to Moscow to discuss the "humanitarian cessation of hostilities."

The high-level diplomacy and even a limited break in the fighting were the first respite in the 13-day-old war, which has already killed unknown hundreds in the worst violence since Armenians and Azerbaijanis signed a ceasefire in 1994.

Ahead of the meeting the Armenian side sought to play down expectations, emphasizing that the agenda was “exclusively” focused on the exchange of bodies and prisoners.

Azerbaijan sounded a more encouraging note. OC Media reported that Hikmet Hajiyev, Aliyev’s senior foreign policy adviser, told Turkish television that the meeting would be “the first contact” and that through ongoing discussions it would be possible “to come to a resolution of the conflict,” although “everything will depend on the discussions.”

Azerbaijan had previously been demanding a full Armenian withdrawal from Azerbaijani territory before it would agree to a ceasefire, and there was no indication that that had changed.

Zaur Shiriyev, a Baku-based analyst for the International Crisis Group, predicted that “no substantial talks will be still in sight for a long time” unless international mediators could put forth proposals that would satisfy Azerbaijan’s demands, including a return of the Azerbaijanis displaced by the 1990s conflict to their homes. “Even if [a] ceasefire becomes somehow possible in the coming days, there will be another outbreak of fighting in several days,” he tweeted before the meeting.

Curiously, just ahead of the talks there was a spate of articles in Azerbaijani government-controlled media portraying Pashinyan as having been outmaneuvered by Aliyev, “begging” for peace talks and being ready to surrender territory. Aliyev then issued an aggressive address to the nation, arguing that Azerbaijan's wins on the battlefield forced Pashinyan to come to the negotiating table.

The fact that the talks took place under Russian mediation underscored the dominant role that Moscow still plays in the region.

Russia considers the South Caucasus to be its strategic backyard and sphere of influence, and over the years it has been the international player by far the most deeply involved in the conflict and the attempts to resolve it.

But in these nearly two weeks of fighting, Moscow’s relative disengagement from the conflict had been conspicuous.

Turkey’s aggressive entry into the conflict on the side of its ally, Azerbaijan, raised the prospect of a counter move by Russia, Turkey’s regional rival and a treaty ally of Armenia.

But Russia has held back. It took Putin more than a week to comment on the outbreak of fighting, and when he did so it was in measured terms. In particular, he called attention to the fact that Russia’s obligations to defend Armenia, under the Collective Security Treaty Organization, only would be activated if Armenia itself came under attack. Thus far, the fighting has been limited to Nagorno-Karabakh and surrounding territories, all of which are internationally recognized as part of Azerbaijan.

“We have certain obligations as part of this treaty,” Putin told TV network Rossiya 24, the Moscow Times reported. “Russia has always honored and will continue to honor its commitments.”

“It is deeply regrettable that the hostilities continue, but they are not taking place on Armenian territory,” Putin said.

Meanwhile, other potential mediators have been falling by the wayside. Along with Russia, the two parties in the Minsk Group of the OSCE, the diplomatic body that has been mediating the talks between Armenia and Azerbaijan for nearly three decades, are the United States and France.

The United States has evinced very little high-level interest in the new war. And Azerbaijan has turned against France following comments by French President Emmanuel Macron criticizing Turkey’s involvement in the conflict and appearing to back Armenia. "I say to Armenia and to the Armenians, France will play its role," he said on September 30.

That resulted in a firestorm of criticism of France from Azerbaijan and suggestions that Paris could no longer be an honest broker between the two sides. “France is already excluding itself from this equal trio [the Minsk Group], and we cannot remain silent about it,” Aliyev told Turkish television.

"Putin’s ceasefire demand comes at a critical moment. With his swift summons, the Russian leader has emerged as the Grandmaster of the Caucasus, diplomatically isolating his Turkish opponent," wrote Yerevan-based analyst Richard Giragosian in an analysis for Asia Times.