Iran has been a fairly marginal player in the South Caucasus, but both Armenia and Azerbaijan are competing to draw it into the region. 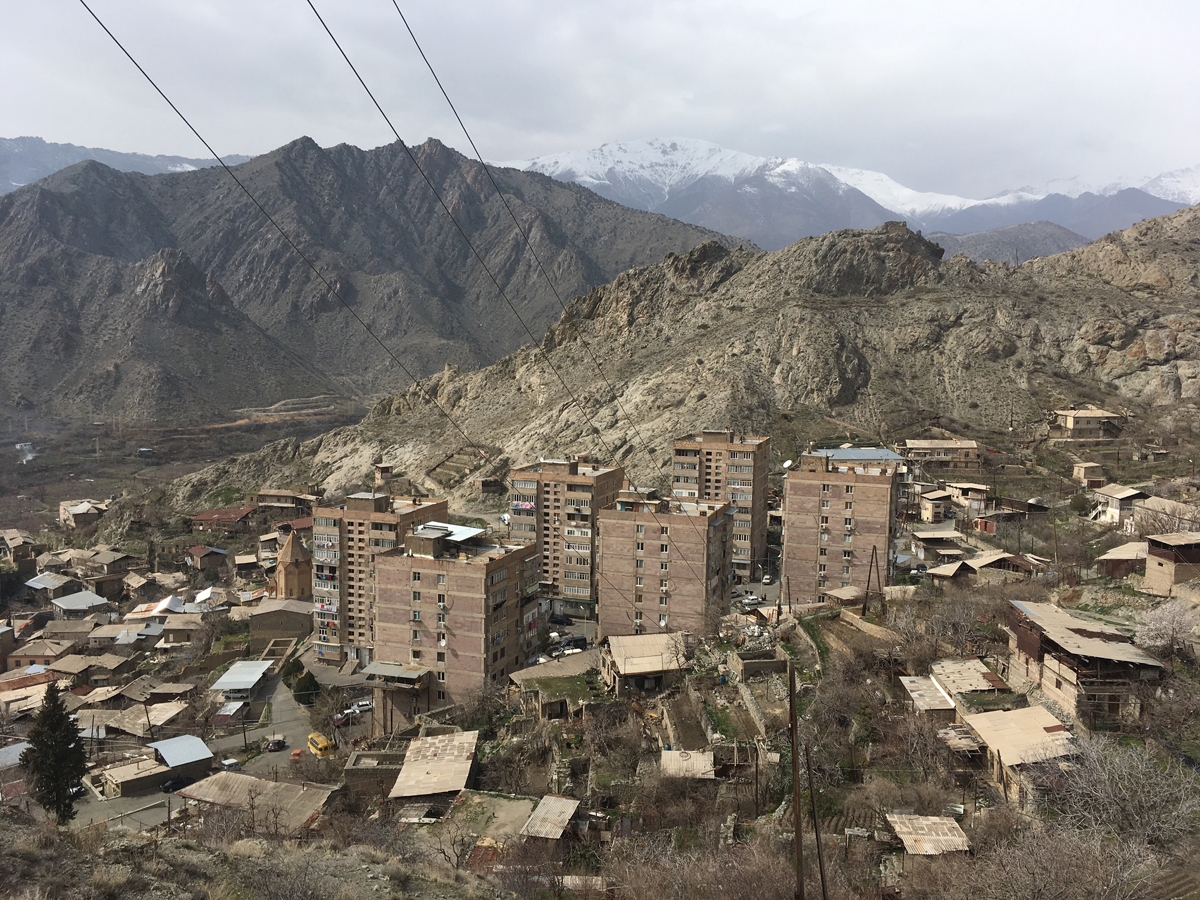 The view from Meghri Fortress - a defensive structure built in the eleventh century. Meghri today remains a strategic town on the Armenia-Iran border and is expected to play a central role in expanding regional trade. (Photo: Bradley Jardine)

On its heavily fortified border with the Islamic Republic of Iran, Armenia is developing a new strategy to overcome decades of economic isolation. But a bit to the east, on its own border with Iran, Azerbaijan is endeavoring to thwart Yerevan's plans.

Last December, Armenia opened a free economic zone (FEZ) in its southernmost city of Meghri, on the Iranian border. The zone aims to take advantage of the Iranian market and position Yerevan as a broker between Tehran and the Eurasian Economic Union, the Russia-led trade organization of which Armenia is a member.

The trade could be mutually beneficial: The Islamic Republic has long expressed interest in expanding trade links to Russia via the EEU, and Iran offers just one of two borders left open to Armenia after Turkey and Azerbaijan closed their respective frontiers following the war over Nagorno-Karabakh in the early 1990s.

Trade between Armenia and Iran has been growing annually, reaching $211.4 million in 2017. In Meghri, the influence is evident. As you wind down the dusty roads to the border, Persian script covers billboards by the side of the road: “Happy Nowruz” they say, referencing the Iranian New Year.

And locals have a generally positive view of their neighbor to the south.

“You should visit Iran, it’s a beautiful place,” says Tigran Hovanesyan, a local mechanic, to his British guest. “Just show up at the border and they’ll let you walk right in – they’re very friendly.” (Armenians can visit Iran visa-free, but that is not the case for Britons.)

Iran has been a fairly marginal player in the politics of the South Caucasus, but both Armenia and Azerbaijan are competing to draw it into the region, and by extension, gain a strategic advantage.

“Our intentions [in Meghri] are serious,” Armenian Prime Minister Karen Karapetyan said at the opening ceremony of the FEZ. Iranian entrepreneurs will have the opportunity to establish businesses in the zone, and then export their products to European and Eurasian markets, he added. “The conditions in the zone, combined with the trade regimes we enjoy with the Eurasian Economic Union and European Union, may provide good opportunities for business expansion.”

The Iranian side is also positive about developments on the border.

“The launch of the Meghri Free Trade Zone will be conducive for economic turnover between Armenia and Iran and the exchange of experience with Iranian free trade zones,” Seyyed Kazm Sajadi, Iran's ambassador to Armenia, said at the opening.

The conditions in the zone are certainly generous.

“Companies operating in the Meghri FEZ will be exempt from profit tax, value added tax, excise tax and customs fees,” the provincial governor’s press secretary, Vazgen Sagatelyan, told Eurasianet. “We expect the zone to attract 50 to 70 companies in the coming years, investing a total of $100-130 million and creating more than 1,500 jobs.”

These projections are ambitions. Armenia’s other two economic zones, the Meridian and Alliance FEZs in Yerevan, established in 2014, have between them created just 94 jobs and garnered interest from 17 companies. Two of those suspended their activities last year.

And the Meghri FEZ is being launched even as another ambitious Iran-Armenia trade project, the Southern Armenian Railroad, has stalled.

Agreement on the construction of a rail link between the two countries was approved by both governments in 2009. Three years later, Yerevan granted the Dubai-based Rasia FZE Investment Company a 50-year concession by the Armenian government to build and manage the 305-kilometer line. By late 2013, the company had developed a feasibility study for the project, estimating it to cost $3.5 billion.

The project failed to take off, however, after aggressive lobbying by Baku.

“In 2016, after the Iranian government and China held negotiations to construct a new railway between Iran [and] Armenia, Azerbaijan (unofficially) threatened to freeze its loans to Iran,” Fuad Shahbazov, a political analyst based in Baku, said in emailed comments.

In January, Tehran accepted a $500 million loan from Baku to construct a 205-kilometer railway from Rasht to the Azerbaijani border (known as the Rasht-Astara line). Then in March, the foreign ministers of Iran, Turkey, Georgia, and Azerbaijan all met in the first-of-its-kind quadrilateral meeting.

In a statement following the meeting, the four sides hailed “the significant steps taken to increase the transit potential of the four countries […] favorably situated on international transit corridors in order to integrate their national transport infrastructure.” They also pledged “further enhancement of cooperation for implementation of new projects in order to develop transport infrastructure and increase transit potential of the four countries [...] starting from the Iranian ports of Bandar-Abbas and Chabahar at the Persian Gulf through Rasht-Astara connecting to [the] Baku-Tbilisi-Kars railway.”

Azerbaijanis interpreted that as a signal that Tehran was privileging Azerbaijan over Armenia in its transit to the north. “The way out of Iran is Azerbaijan,” said Azerbaijani MP Rasim Musabekov.

The Rasht-Astara deal, signed between Azerbaijan Railways and Iran Railways, will see Azerbaijan rent the railway line for 15 years, and the terminals for 25 years. It aims to increase bilateral trade between Iran and Azerbaijan from 600,000 tons to 5 million tons per year.

“Azerbaijan hopes the railway will create new jobs for people in the provinces, as well as stimulate the development of local infrastructure across the southern part of the country,” Shahbazov said.

There’s also a strategic imperative. A major security concern for Baku is its exclave of Nakhichevan, which, since the war with Armenia, has been only reachable by air. Baku sees the potential to expand the recently launched railway between Nakhichevan and the Iranian city of Mashad, linking it to Azerbaijan’s main railway network.

“The first freight from Russia reached the Iranian part of Astara in February 2018,” Shahbazov said. “Azerbaijani media has said the network would be fully operational by March but it looks like summer will be more likely.”

Nevertheless, it does appear to give Azerbaijan a lead in the competition for Iranian transit.

Armenian Prime Minister Karapetyan in January acknowledged his country's troubles financing its railroad project: “I believe that the construction of a railway to Iran is not an end in itself, because if built it might not be used to transport as many commodities as [necessary] to become commercially viable.”

But Armenians hope that the new trade zone in Meghri will boost commerce and thus create an economic base for the railway.

“The establishment of the FEZ is aimed at replacing [the railway],” says Richard Giragosian, director of the Regional Studies Center think tank in Yerevan. “It is seen as a more effective and viable alternative, but also a better strategy to meet the same goal: to deepen and develop bilateral trade.”

By developing bilateral trade first, Yerevan hopes then to position Armenia as a major transit hub between Iran and Russia. To this end, the country is also lobbying its northern neighbor Georgia to invest in the Meghri FEZ.

On March 2, Georgian Prime Minister Giorgi Kvirikashvili met with his Armenian counterpart to discuss the FEZ.

“We spoke about possible areas of our cooperation,” Karapetian told journalists. “That includes the Meghri Free Economic Zone. We spoke in detail and […] agreed how we will be moving forward in the energy and transport sectors.”

Currently, Armenian trade with Russia has to use the sole remaining Russian-Georgian border crossing at Upper Lars, which is often blocked by snow during winter. The two other roads connecting Georgia and Russia pass through the breakaway regions of South Ossetia and Abkhazia. Both of these roads were closed following the 2008 Russian-Georgian War.

Last year, Georgia and Russia signed an agreement to re-open those roads as “trade corridors” – with cargo monitored by a third party, the Swiss SGS company – after years of negotiations between Tbilisi and Moscow brokered by Switzerland.

But prospects for Armenian involvement may be limited in the short-term.

“The Georgian government seems positive about the deal,” said Kornely Kakachia, director of the Georgian Institute of Politics. “But it won’t help Armenia’s plans for a transit corridor without major concessions from Moscow on the status of the breakaway regions.”