The deal, brokered by Georgia and the United States, is a partial resolution to the most contentious issues between the two sides following last year’s war. 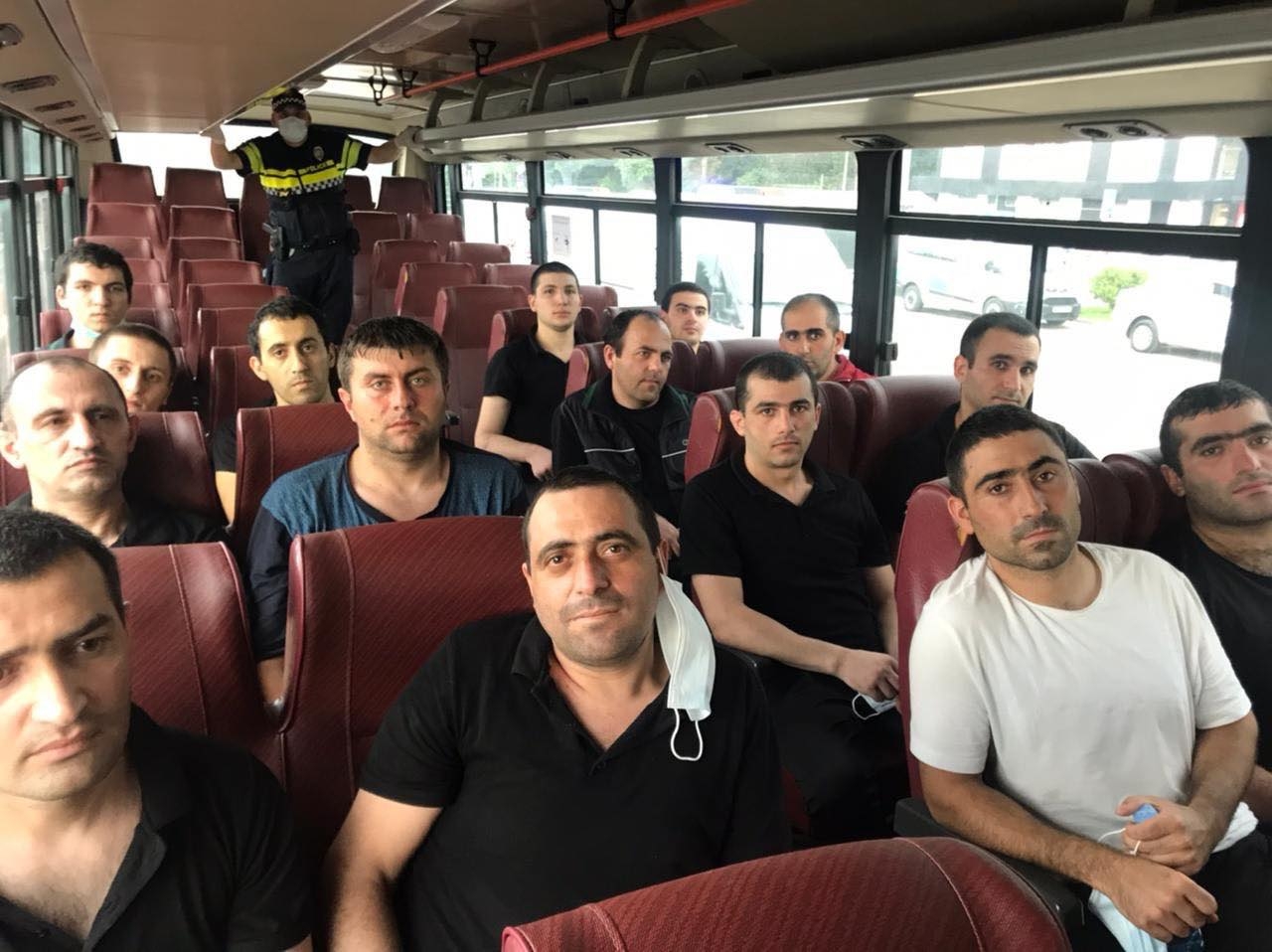 Armenian soldiers returning from detention in Azerbaijan as part of a deal including Armenia's handover of land mine maps. (photo: Nikol Pashinyan, Facebook)

Azerbaijan has released 15 Armenian detainees in exchange for maps of land mines that Armenian forces laid in territory that Azerbaijan retook in last year’s war, the first diplomatic breakthrough following a long period of heightened tension between the two sides.

The deal was announced by Azerbaijan’s Ministry of Foreign Affairs on June 12. “[I]n exchange for providing Azerbaijan with maps of 97,000 anti-tank and anti-personnel mines in the Aghdam region, 15 detained Armenians were handed over to Armenia on the Azerbaijani-Georgian border with the participation of Georgian representatives,” the MFA said in a statement.

Armenian acting prime minister Nikol Pashinyan confirmed the deal, posting on Facebook a photo of the returning detainees in a bus. “Our brothers are coming home,” he said. He later posted a list of the 15 soldiers who were being returned. “We are continuing the process of returning our detainees,” he told supporters at a campaign rally in the town of Gavar, eight days before elections. “I note that we did not exchange the detainees for the landmine maps, but responded to Azerbaijan’s step with [our own] constructive step.”

The detainees and the mine maps have been the two most tendentious issues between the two sides following the end of last year’s war, and the June 12 deal is a partial resolution.

Armenia has said that close to 200 of its soldiers and civilians had been held in Azerbaijan. (Baku says the number of detainees is much smaller, several dozen, and that they were all soldiers who had crossed into Azerbaijani territory following the signing of a ceasefire agreement in November). And Aghdam is only one of the seven territories of which Azerbaijan regained control. The most recent mine accident, which killed two Azerbaijani journalists and a local government official, took place in a different region, Kelbajar.

Armenian officials had been suggesting unofficially that the mine maps that Azerbaijan has long been demanding did not exist, while dodging the question publicly. In April, a spokesperson for the Armenian Ministry of Foreign Affairs called Azerbaijan’s demand for the maps a “fake agenda.”

Baku said that the June 12 deal had been brokered by diplomats and officials including Georgian Prime Minister Irakli Garibashvili, United States Secretary of State Anthony Blinken, Acting Assistant Secretary of State for European and Eurasian Affairs Philip Reeker (who had just visited Baku and Yerevan in the days before the deal was agreed), as well as officials from the European Union and the OSCE.

Notably absent in that list: Russia. Moscow has dominated the post-war diplomacy between the two sides, though both have been chafing at Russia’s role. Azerbaijan has been unhappy with what it sees as Moscow’s deference to the leadership of the unrecognized Armenian government in Nagorno-Karabakh; Armenia has felt that its ally Russia has stood to the side as Azerbaijan has been pressuring Armenia along its border.

Georgian Foreign Minister David Zakaliani said in a statement that diplomats in Tbilisi had been working on the deal for months. “For the last two-to-three months we have been working very actively with our main strategic partner, the U.S., to achieve this result,” he said. He also said Garibashvili had been holding “round-the-clock contacts” with American officials on the deal.