Tbilisi has been trying to help its two warring neighbors find a common ground, as it risks spillover from the widening conflict. 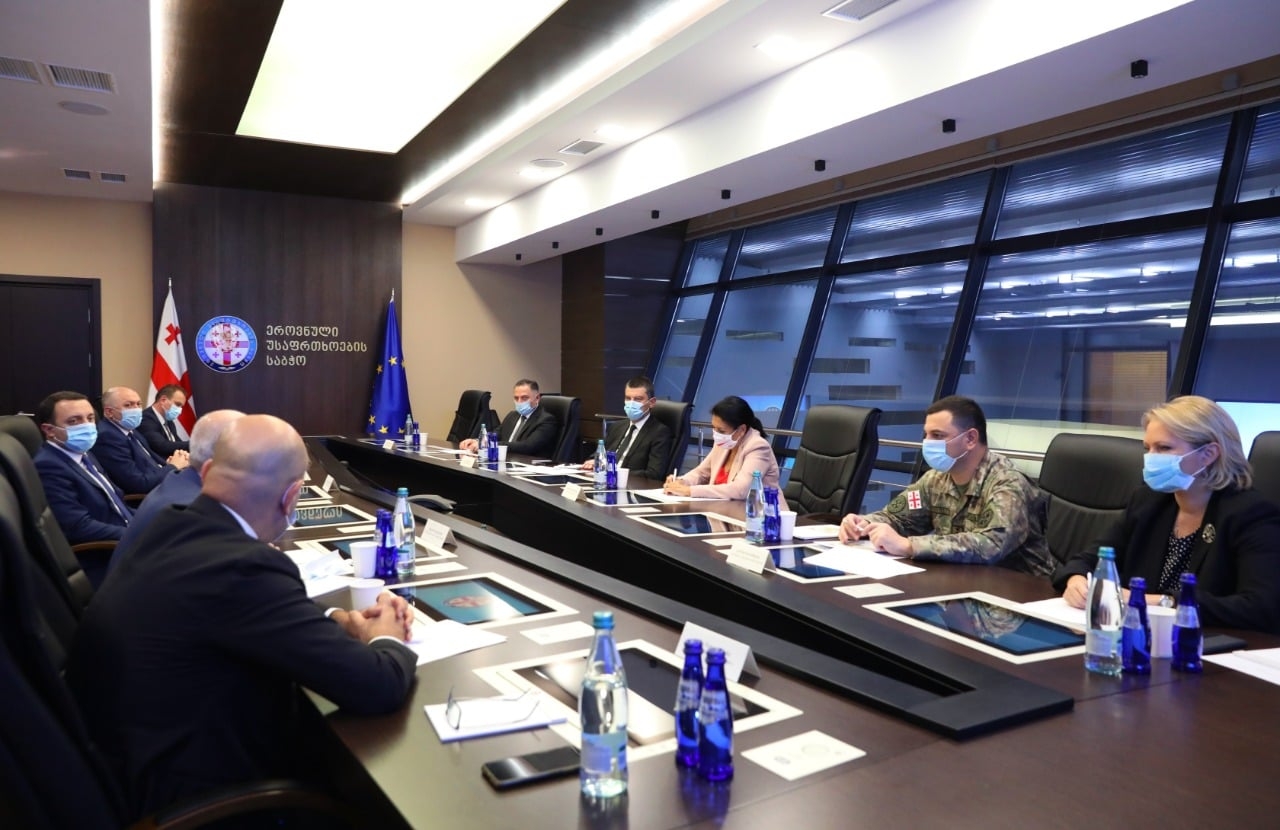 Caught in the middle: Georgia's National Security Council meets on October 3 to discuss the war between the country's neighbors. (government handout)

As the conflict between Armenians and Azerbaijanis has escalated, their neighbor Georgia has been caught in the middle, trying to play a peacemaker role as the conflict risks spilling over into the broader region.

On September 30, three days after the fighting broke out, Georgian Prime Minister Giorgi Gakharia invited the warring sides to talk it out in Georgia. “Georgia is ready support the [peace] process in any way possible, including hosting a meeting of the parties to the conflict in Tbilisi to hold a dialogue,” he announced.

But neither side is in the mood to talk, as the fighting has continued for more than a week, killing hundreds with no end in sight.

“That offer was essentially meant for Baku, which, as always, is not willing to negotiate,” Armenia’s ambassador to Tbilisi, Ruben Sadoyan, told the news service Kviris Palitra. “They [the Azerbaijanis] are trying their luck on the battlefield and it is going to end badly for them.”

Azerbaijan’s envoy, Faig Guliyev, said that Baku would only agree to negotiate if Armenia agrees to pull out its troops from breakaway Nagorno-Karabakh and the surrounding territories. Those lands are the core of the conflict between the two sides, as Armenian forces took control of them during the first Karabakh war in the 1990s, while Azerbaijan has made it its national mission to reclaim them.

“We shall not agree to negotiations if they serve as a ruse to extend the occupation” of Azerbaijani territory, Guliyev told Kvriris Palitra.

The fighting is the worst between the two sides since the 1990s and runs the risk of spilling over in unpredictable ways into their mutual neighbor, Georgia.

“We have a common interest to bring peace to the region as soon as possible,” Gakharia said. “We all are acutely aware that continued escalation will have extremely negative effects on the entire region.”

The fates of the three South Caucasus nations are deeply intertwined and the region is a minefield of disputed borders and varying degrees of irredentism. Georgia can’t physically keep its distance: It serves as a bridge between Armenia and Azerbaijan and their respective big-power partners, Russia and Turkey. Georgia is also home to large ethnic Armenian and Azerbaijani communities.

Georgia has so far seen no intra-ethnic tensions between its Armenians and Azerbaijanis, but “the rhetoric and passions aroused now are so extreme that we must be ready for repercussions for Georgia,” Thomas de Waal, a longtime Caucasus observer and a senior fellow at the Carnegie Endowment for Peace, told Eurasianet.

In Georgia’s minority-dominated areas, concepts of citizenship and homeland don’t always overlap. Armenia “is my nation, my land and my homeland […] this is our war,” said one participant in a recent Armenian-Georgian demonstration, RFE/RL reported.

Azerbaijan’s embassy in Tbilisi claimed that some ethnic Azerbaijanis living in the southeast of Georgia also volunteered to join the Azerbaijani army, but that it asked them to step down. “The state of Azerbaijan and its armed forces have all the resources to cope with the task at hand,” the embassy said, though it added that the Azerbaijani military would accept financial contributions and provided the requisite bank details.

Some ethnic Azerbaijani members of Georgia’s parliament spoke out in support of Azerbaijan’s campaign in Karabakh, saying that success in that offensive could lead to the restoration of Georgia’s control over its breakaway territories, Abkhazia and South Ossetia. Sadoyan, the Armenian ambassador, condemned these statements, saying that “multinational Georgia is not a country where members of parliament can afford to make such statements.”

Both Baku and Yerevan are watching Tbilisi closely for any perceived bias toward either side, while also reminding Georgia what valuable partners they each are.

Sadoyan played to Georgia’s long history of struggling with Turkish invasions. “Our bitter historic experience is the testimony of what Turkey is and what kind of role it has been playing in the region for centuries,” he said.

To pre-empt accusations that it is taking sides, Georgia moved quickly to close its borders and airspace to military supplies to both Armenia and Azerbaijan. “Both sides were informed of this,” said Georgia's National Security Council in a statement, adding that non-military transit continues as usual.

Not everyone was convinced that Georgia was blocking the military transit. A group of Armenian-Georgians in the southern region of Javakheti briefly blocked a highway near the Georgian-Turkish border to prevent the transit of what they claimed were supplies for Azerbaijan’s armed forces.

Residents of the region also were angered by Georgian border guards’ reluctance to let some of their aid to Armenia cross the border. Two of several trucks loaded with locally collected humanitarian aid were held for a time at the Armenian-Georgian border, though they were eventually allowed to go through.

Still, the region’s social media is abuzz with unsubstantiated claims that Georgia is allowing Turkish military aid to pass through to Azerbaijan while barring humanitarian aid from transiting. Some Armenians have posted online videos and messages excoriating Georgians, prompting rounds of acrimonious exchanges between the two groups. The Armenian Embassy in Tbilisi tried to tamp down the tension, announcing on October 6 that reports of Georgia blocking humanitarian aid to Armenia were false.

Turkey and Russia’s roles in the conflict are another source of concern in Georgia.

Moscow has not been in a hurry to help its treaty ally Armenia, possibly due to the perception that Yerevan’s government isn’t as loyal to the Kremlin as was the previous regime.

Still, Georgians remain worried about a potential Russia military entry into the conflict. The fastest land route between Russia and Armenia passes through Georgia, and Moscow has a habit of not asking for Tbilisi’s consent when it wants to move its troops into Georgian territory.

And while Turkey and Georgia generally maintain good relations, Ankara’s new geopolitical assertiveness is a wild card with unpredictable implications for Tbilisi.

With all these real or potential complications, Georgia has perhaps more at stake in peace between Azerbaijan and Armenia than does any other third country. “Georgia is genuinely interested in peace (or, at least, in the absence of war) between Armenia and Azerbaijan,” analyst Jaba Devdariani told Eurasianet.

Still, Georgia may have the will but not the way. “A mediator needs certain political influence and gravitas, as well as the bureaucratic capacity, and the ability to mobilize international leverage. These Georgia currently lacks,” Devdariani said.  Given its geographic proximity and neutrality, Georgia could be a good physical venue to hold a dialogue, he said, but the impetus to start one should come from outside.

If that happens, Georgia would be a symbolically suitable common ground. The country has long been an example of peaceful coexistence between Armenians and Azerbaijanis, and a frequent meeting point for civil society initiatives bringing the two sides together. De Waal recalled visiting the Georgian village of Khojorni, where “Armenians and Azerbaijanis live side by side peacefully in the territory of Georgia,” he said. “With one Georgian policeman in the village.”