Armenia and that post-Soviet trick with prime ministers 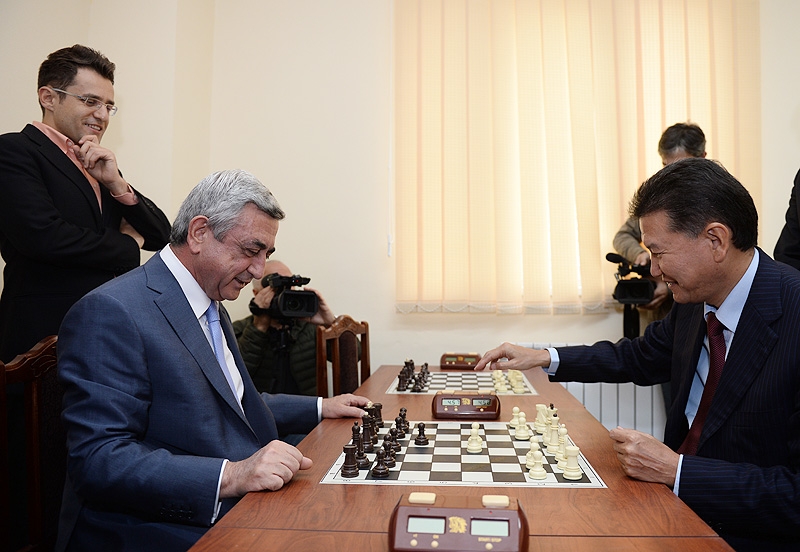 Two Russians are having a conversation following the peaceful revolution in Armenia, goes a recent joke. “Wouldn’t it be great if people came out to the streets to kick out Vladimir Putin like what happened in Armenia?” One says. “Yes, but we don’t have enough Armenians in Russia,” replies the other.

It was self-exiled Russian politician and chess legend Garry Kasparov, half-Armenian for what it's worth, who tweeted the joke. It's possible Kasparov himself invented the joke, but he wasn't the only regime change enthusiast in Russia to make the connection. Opposition leader Aleksey Navalny praised the Armenian example, and other anti-Putin Russians watched the Armenian revolution with hope, even envy. “How Did the Armenians Do It?” inquire many Russian news stories, opinion pieces and social media posts.

Armenians succeeded in what anti-Putin Russians have not – they did not let entrenched leader Serzh Sargsyan hop between the posts of president and prime minister, an increasingly common trick in the region for extending one's rule beyond the constitutionally prescribed limit.

Such swaps have been dubbed “pulling a Putin” after Vladimir Putin and Dmitry Medvedev did the president-prime minister castling move (chess references are unavoidable in this chess-mad part of the world) in 2008 and then flipped back in 2012. In various permutations – and combined with some constitutional maneuvering – the practice has caught on in the post-Soviet universe.

Perhaps the closest parallel is between Russia and Armenia, Putin and Sargsyan. Like Putin in 1999, Sargsyan – himself a keen chess player – served as prime minister, albeit very briefly, in 2007 before assuming the presidency for the first time. Like Putin in 2008, Sargsyan decided to move back over to prime minister’s office after his second and last term as president ran out this year.

One key difference: Unlike Putin, who was taking an at-least-nominally less powerful role, Sargsyan's move would have let him remain the nation's undisputed leader.

Ahead of the switchover, Armenia amended its constitution to make the prime minister the country’s top political job, allowing Sargsyan to continue his rule, just under a different label. In Russia the key executive powers remained, at least formally, with the president during Putin’s premiership, though there was little doubt that Putin was the alpha dog in his tandem with Medvedev.

So if Putin needed a placeholder in between his presidential terms – he served two consecutive terms from 2000 to 2008, took a Medvedev break to honor constitutional term limits, and then was back to serve two more terms from 2012 to 2022 – Sargsyan appeared to be trying to secure a political ever-after for himself as prime minister.

Between Armenia and Russia, both geographically and chronologically speaking, Georgian President Mikheil Saakashvili was also suspected of preparing to pull a Putin when he neared his second and last constitutionally allowed term as president. Like Armenia, Georgia had moved to strengthen the prime minister’s powers, too, but Saakashvili was pushed out of power before the suspicions could be proven wrong or right.

Sargsyan managed to make the transition, at least initially. As a prime minister, he was set to enter into his own version of tandem rule with his successor, President Armen Sarkissian (confusingly, the two men’s last names are the same in Armenian but spelled differently in English). Sarkissian the president could’ve been a Medvedev lite, as the constitutional reforms stripped Armenia's presidency of its executive powers and cut the tenure from two consecutive five-year terms to one seven-year term.

Neighboring Turkey also has tried comparable maneuvers. In 2014, Recep Tayyip Erdoğan executed something of a reverse Putin, switching from prime minister to president, though former Turkish President Abdullah Gül refused to become Erdogan’s Medvedev. Gül, who was seen as a check on power-hungry Erdoğan, said at the time that a Putin-Medvedev-style tandem rule would be “inappropriate” for democracy.

Constitutionally, Turkey also did the opposite of what Armenia and Georgia did: It created a stronger presidency, while Armenia and Georgia switched from presidential rule to parliamentary or mixed systems. But in all three countries, the executive powers went in the same direction as their longtime leaders were headed.

In Armenia and Georgia transitions to the prime minister-led governments were touted as a step toward greater democracy, a solution to the problem of all-powerful presidents. It is a post-Soviet myth that Armenian political analyst Mikayel Zolyan spoke about a month before the Armenian revolution. “This is largely due to the failure of presidential systems across the region in the aftermath of the Soviet Union,” Zolyan said, warning that autocrats can take advantage of parliamentary systems just as easily as they can presidential ones.

Armenia now shows the most promise in the region for implementing meaningful democratic change. In Georgia, long-regarded as the region’s democratic standard-bearer, it increasingly appears that the shadow rule of billionaire ex-prime minister Bidzina Ivanishvili, his vast fortune and his loyalists’ dominance in all halls of power, leaves little hope for any substantial change.

Opponents of leaders for life in the ex-Soviet states, even in Armenia’s nettlesome neighbor, Azerbaijan, hope that some of Armenia’s luck rubs off on them. Azerbaijan has the most repressive system in the South Caucasus neighborhood, but it is also the most honest about it. President Ilham Aliyev, like Putin, got re-elected for the fourth term this year. Unlike Putin and Sargsyan, though, he didn't bother with any prime minister shenanigans. Now president uninterruptedly since 2003, he shows little inclination of leaving the post any time soon.