The leaders of the organization's member states met in Astana, and they -- led by Kazakhstan's Nursultan Nazarbayev -- appeared to be leaning toward letting Belarus take over ahead of schedule. 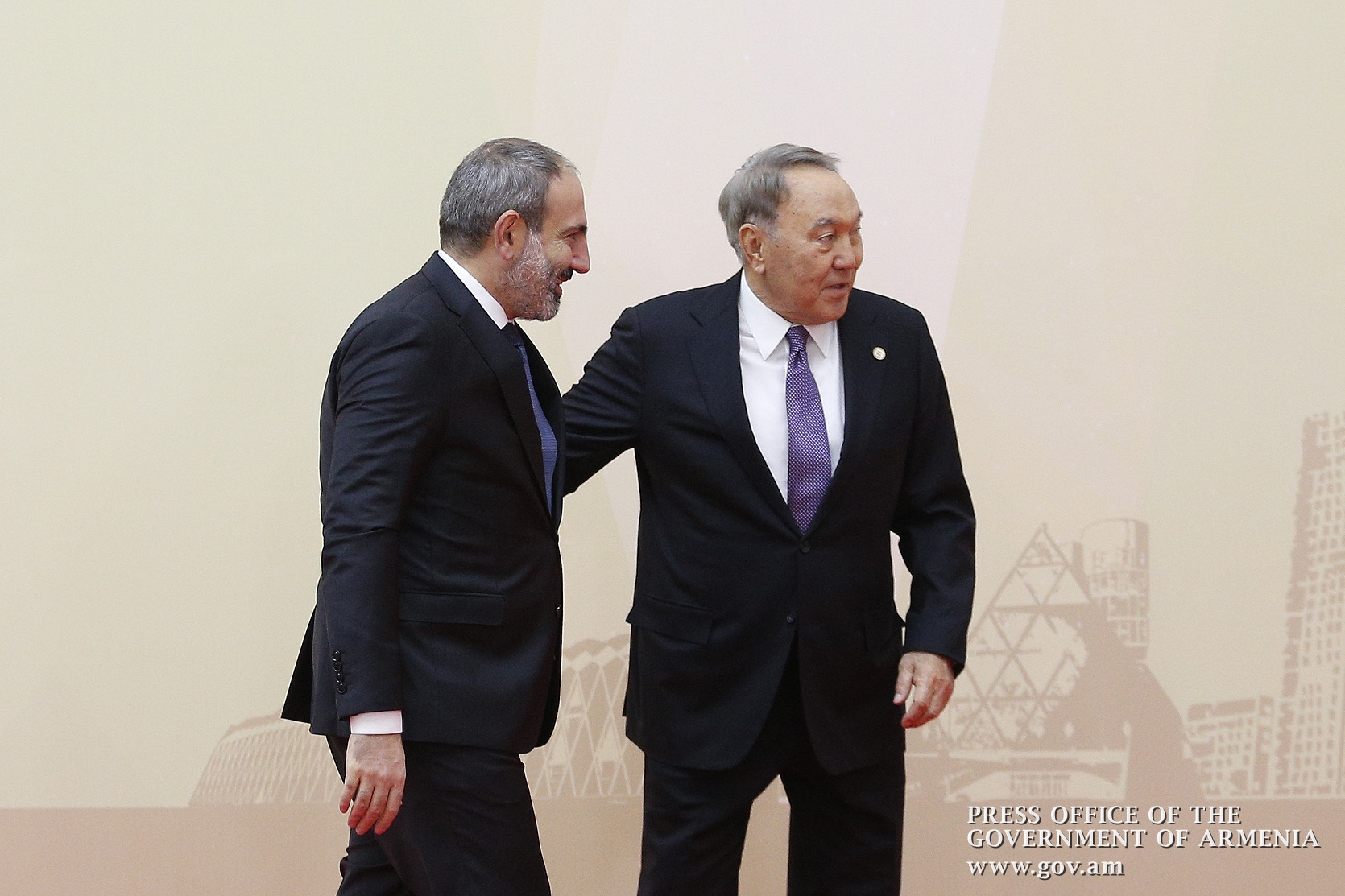 Is Kazakhstan President Nursultan Nazarbayev showing acting Armenian Prime Minister Nikol Pashinyan the door? Nazarbayev appears to be leading the charge to deprive Armenia of its position as secretary general of the CSTO. (photo: Office of the Prime Minister, Armenia)

Armenia is at risk of losing its position as nominal head of a post-Soviet political-military bloc as leaders of the group appear to be leaning toward appointing a non-Armenian as leader.

The bloc, the Collective Security Treaty Organization, held a summit in Astana on November 8 and 9, at which the top agenda item was finding a new secretary general. The most recent secretary general, the Armenian Yuri Khachaturov, was formally recalled by Yerevan on November 2. He is being investigated by Armenia’s new authorities as part of a wide-ranging investigation into the crackdown on protests against fraudulent elections in 2008.

That leaves the CSTO with a job to fill, and the behind-the-scenes jockeying appears to be intense. Russian newspaper Kommersant called the leadership struggle “the main and even the only intrigue of the summit.”

“Three possible variants are being considered” to fill the post, Kremlin spokesman Yuriy Ushakov told reporters ahead of the summit. Those were: 1. Keeping the acting secretary general in the post until 2020, when Belarus was scheduled to take over the position from Armenia. The acting leader is a Russian, Valeriy Semerikov. 2. Choosing a Belarusian representative ahead of schedule. 3. Picking a new Armenian representative before 2020. “The Armenian side is insisting” on that variant, Ushakov noted. “Which decision the leaders will take is at this point difficult to predict,” he added.

In the end, the CSTO heads of state delayed the decision a month; Kazakhstan President Nursultan Nazarbayev told reporters that the new secretary general will be chosen at another summit on December 6 in St. Petersburg.

Both Yerevan and Minsk appear to have settled on their respective nominees: for Armenia, it’s Vagharshak Harutiunyan, a former defense minister; for Belarus it’s Stanislav Zas, chairman of the National Security Council.

The primary opponent of Armenia holding on to the leadership post appeared to be Nazarbayev, who has consistently been a thorn in Armenia’s side both in the CSTO and its economic counterpart, the Eurasian Union. Nazarbayev seemed to pushing for the Belarus option. “We have a collision due to the fact that Khachaturov, the Armenian representative, was our secretary general and was recalled,” he told journalists following the summit. “According to the charter [of the CSTO], after Armenia is Belarus,” he said. “All heads [of state at the summit] said that we need a working secretary general from the Belarusian side.”

Nazarbayev also was reportedly pushing for Azerbaijani President Ilham Aliyev to be invited to the summit, and was supported in that by his Belarusian counterpart, Alexander Lukashenko, among others, Kommersant reported. Azerbaijan is not a member of the CSTO, though there have been recent rumblings about it joining at least as a partner or observer.

“Heads of state of countries not in the alliance can take part in CSTO events if all members of the organization agree with that,” one “high-ranking source involved with the preparation of the event” told Kommersant. Obviously Armenia would oppose Aliyev being there, so it’s not clear what purpose was served by Nazarbayev bringing it up.

In any case, it appears Armenia has few allies in the organization and it’s not looking good for holding on to the position. But does that mean anything for Yerevan?

It’s not clear whether Khachaturov’s tenure at the CSTO brought any tangible benefits to Armenia. At least publicly, he was virtually invisible in the post, unlike his predecessor, longtime KGB officer Nikolay Bordyuzha, who was one of the Kremlin’s most prolific foreign policy spokesmen, regularly speaking out on various diplomatic and security issues. No matter who the secretary general is, it seems likely that Russia will continue to call most of the shots, using its various other levers of influence.

Moreover, it’s not clear how important the CSTO itself is; the most interesting news about the group tends to be about infighting within its ranks rather than anything it does in the real world. (It is, in theory, supposed to be dealing with a variety of regional security threats from terrorism to color revolutions.)

Nevertheless, the loss of the post would represent at least a symbolic blow to Yerevan and a diminution of its stature on the world stage. A foreign ministry official, speaking on condition of anonymity to the Armenian newspaper Hraparak, appeared concerned. “Don’t forget, the CSTO isn’t some sort of club, it’s a serious military structure with serious powers. The general secretary has access to the countries’ presidents and can discuss serious issues,” the official said. “Belarus right away put forward its candidate and muddled up the whole process, and then said that there was no decision. And Khachaturov’s appointment was no small feat. Azerbaijan was against it, and Belarus promoted its interests.”