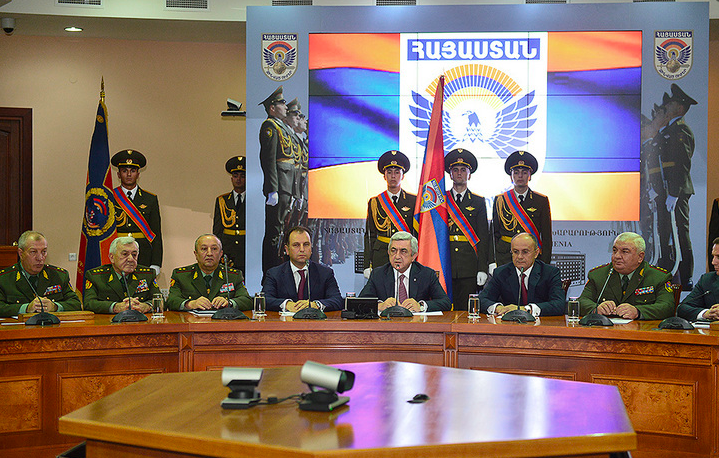 Armenia has appointed a new defense minister, a civilian educated in the United States.

The new minister, 41-year-old Vigen Sargsyan, will replace Seyran Ohanian, who had headed the defense ministry since 2008. Sargsyan had been the chief of staff to President Serzh Sargsyan (no relation).

The two elements of Sargsyan's biography that have attracted the most scrutiny are the fact that he is a civilian (Ohanian was a decorated veteran of the war with Azerbaijan in the 1990s, and held the rank of colonel-general) and that he was educated in the U.S., with a master's degree from Tufts University's Fletcher School, the training ground of much of the U.S.'s foreign policy establishment.

In most countries it's common for the defense minister to be a civilian, but it apparently raised some concerns in Armenia. President Serzh Sargsyan, introducing the new minister on Monday, appeared to try to justify the appointment of a civilian by emphasizing that the role of defense minister has as more to do with personnel, management and veterans issues as with warfighting.

The press secretary of the ruling Republican Party Eduard Sharmazanov elaborated on that in an interview with RFE/RL. "In the 21st century -- look, for example, at Georgia -- the minister of defense was not a soldier, but a woman. We have to understand that the minister of defense is not a military position, not the position of a general," Sharmazanov said, referring to Tinatin Khidasheli, who stepped down earlier this year as Georgia's defense minister.

Sargsyan's American education also was the source of speculation, given Armenia's close military ties with Russia, including a Russian military base in Armenia, a treaty alliance via the Collective Security Treaty Organization, and substantial Russian aid in arming Armenia's armed forces.

But Yerevan-based analyst Sergey Minasyan said that Sargsyan's biography in fact reflects the multipolarity of Armenia's defense relations. Minasyan noted that Sargsyan also studied at the Saint Petersburg State University of Management (though apparently in a distance-learning program) and had plenty of experience working with Russians as the president's chief of staff.

"Carrying out a foreign and defense policy cooperating simultaneously with Russia in the framework of the CSTO and cooperating with partners in NATO requires the kind of foreign policy perspective that, I hope, Vigen Sargsyan has and will demonstrate in his new post," Minasyan told the news website News Armenia.

Ohanian had been rumored to be the next secretary general of the Collective Security Treaty Organization, but then publicly announced that he wouldn't take the job. His future remains uncertain.

Meanwhile, this may only be a stepping stone for Sargsyan. Caucasus analyst Emil Sanamyan suggested that this appointment made Sargsyan the front-runner to be prime minister after the country transitions to a parliamentary republic in 2018.