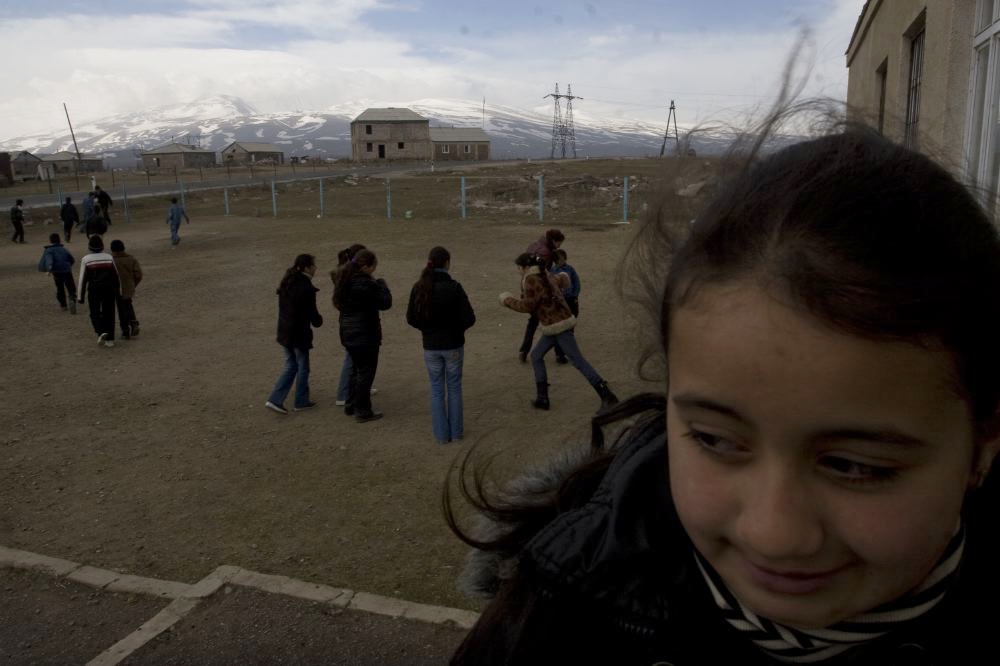 Should Armenia worry about a shortage of girls? (Photo: Anahit Hayrapetyan)

Armenia’s high rate of male births is alarming international and Armenian pre-natal specialists. Their chief concern is that selective abortions are contributing to a demographically undesirable gender imbalance.

Government statistics indicate that a gender imbalance in births has existed since the early 1990s, but the trend has become more visible in recent years. The State Statistical Service of Armenia reports that 23,800 boys and 20,900 girls were born in 2010, working out to a rate of about 114 male births for every 100 female births. In 2009, 23,600 boys and 20,700 girls were born, marking approximately the same birth ratio as in 2010.

The United Nations Population Fund (UNFPA) puts the worldwide sex ratio at birth at 105-106 males per 100 females. Armenia has an overall population of 2.96 million.

Assessing the birth ratio, the head of the State Statistical Service’s Census and Demography Department warned that Armenia faces “a serious problem.”

“A study must be conducted to find out whether this imbalance is the consequence of selective abortions, or something else,” said Karine Kuyumjian. “[T]he problem is obvious, and it will become even plainer later, when, along with demographic issues, we will face a lack of future mothers.”

Representatives from the Parliamentary Assembly of the Council of Europe (PACE) recently reached a similar conclusion. Armenia’s above-average rate of male births indicates “that there must be some sort of pre-natal sex selection,” said Doris Stump, a PACE rapporteur on pre-natal sex selection who travelled to Yerevan in June to assess the problem.

“But there is no knowledge yet about how it is done and what is the responsibility of doctors telling the sex of the child to the parents,” Stump said. “More research has to be done on that question.” A report about the need for member-countries “to fight against the preference for boys” in family planning will be presented to PACE in October, she added.

As elsewhere in the Caucasus (Georgia and Azerbaijan also post high rates of male births, PACE reports), much of the problem may have to do with a heavy cultural emphasis on the value of having sons.

“A good man must have a son,” said sociologist Aharon Adibekian, commenting on Armenian attitudes toward their children’s gender. “If you don’t have a son, who will inherit your belongings, your house and [look after] your family?”

Sociologist Adibekian, however, scoffs at the notion that this preference would prompt women to abort female fetuses. “In countries at war, the number of boys is high; this is called a war phenomenon,” he asserted, referring to a spike in male births noted by demographers in countries engaged in long-term combat, where 120 boys can be born for every 100 girls. The same might be happening amid Armenia’s ongoing standoff with Azerbaijan, Adibekian suggested.

“[S]ince the findings of the study are yet unknown, maybe it’s too early to speak about it with certainty, but if we try to consider it logically, we will see it is very likely to be so,” said Garik Hayrapetian.

“The birth rate has decreased about twice now as compared to the 1980s, and by reducing the number of baby girls we risk entering a vicious circle,” Hayrapetian continued. “When we say we need soldiers to provide for Armenia’s security, we should not forget that we need enough … mothers to whom these soldiers will be born in the future.”

But for women like 27-year-old Yerevan homemaker Gayane Hovhannisian, her husband and her family’s “honor” outweigh any concern about Armenia’s demographic situation.

A mother of two daughters, Hovhannisian says that she did not hesitate to opt for an abortion when she learned she was pregnant with a third girl. Six months later, she got pregnant again; this time, with boy-girl twins. To avoid having another girl, she chose another abortion.

“After these abortions, I finally fulfilled my husband’s dream, and our son was born,” Hovhannisian said. “I would burn with shame if I failed to give birth to a son.”

Official statistics show that the number of abortions in Armenia (13,797 cases) increased by roughly 10 percent in 2010 compared with the previous year; some specialists, though, maintain that the actual figures are higher.

That suggests that many abortions “are performed secretly and illegally,” said Marine Margarian, a project coordinator on gender rights issues at the Public Information and the Need for Knowledge non-governmental organization. “Of course, an abortion performed after the 12th week of pregnancy is not registered officially; otherwise, the picture would be clearer.”

Dr. Mkhitarian cautions that warnings about gender-based abortions will do nothing to stop the use of abortions for “family planning.”

“[I]f … a woman of about 40 has three daughters and she learns she is expecting a fourth girl, she will go for an abortion despite any recommendations by either PACE or the Republic of Armenia or whoever it may be,” said Mkhitarian.