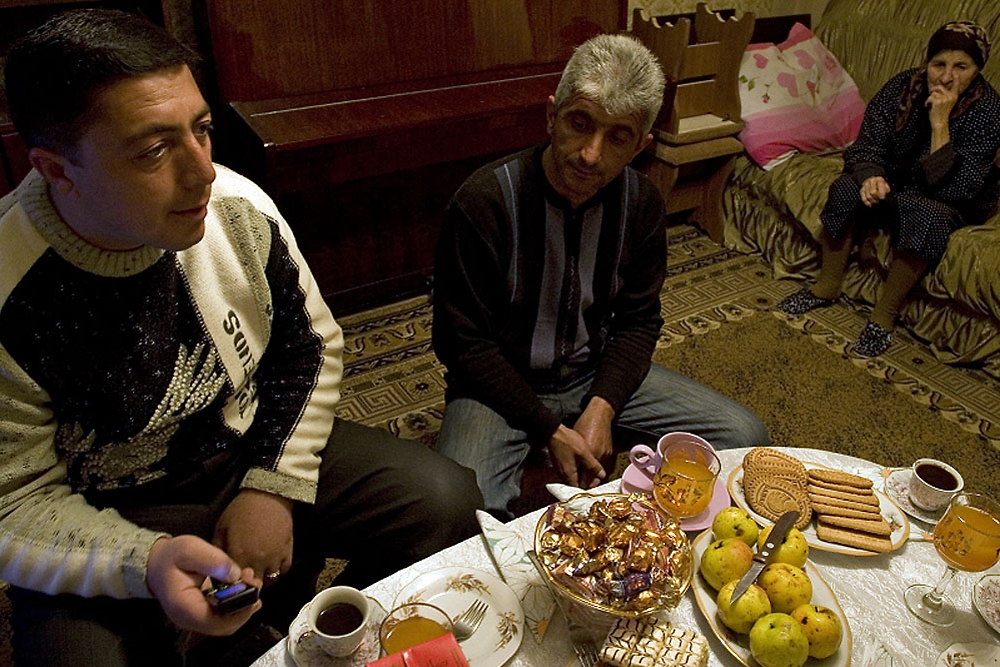 With Armenia on the verge of joining the Moscow-led Customs Union as a full member, the value of Russia’s ruble continues to slip as Western sanctions take hold. The devaluation of the ruble is rippling within the Armenian economy, causing inflation and sharply raising food prices, making it tougher for Armenia’s large poor population. (Photo: Anahit Hayrapetyan)

Santa Claus supposedly received a desperate letter from a woman in Armenia this year – a plea for financial help after enduring a year of economic hardship. “I don’t know how to live now,” the woman, a character in a TV ad for the Armenian lottery, complained.

Increasingly, many Armenians in real life are asking the same. That is because the Russian economy’s current woes are causing a cascade of economic uncertainty for Armenia.

The death-spiral of the Russian ruble is wreaking particular havoc on the tens of thousands of Armenian families that are financially dependent on remittances sent by relatives working in Russia. Western sanctions and the plunging oil price have knocked more than 78 percent off the value of the Russian currency against the dollar since the start of the year. Because most remittances to Armenia are denominated in dollars, the amount of money being sent home by labor migrants in Russia is experiencing a significant decline. In October, the latest month for which data is available, the $161.6 million in remittances sent from Russia to Armenia marked a 17.1 percent decline over the same month in 2013.

As the value of remittances goes down, consumer prices in Armenia are climbing steadily. The value of the national currency, the dram, is coming under heavy pressure. Over the past month, prices for bread appear to have increased by about 10 percent, cereals by 20 percent, and meat and dairy products by at least 20 percent, according to a non-scientific survey by EurasiaNet.org of nine grocery stores in the Armenian capital, Yerevan.

Broadly speaking, the Armenian economy is tied to Russia’s. Key sectors, including mining, telecommunications and energy, are nearly entirely under the control of Russian companies. In addition, Armenia imports many of its consumer products from Russia, its top trade partner.

Many political observers in Yerevan are now worried about what will happen on January 1, when Armenia is expected to bind itself to the Russian economy by joining the Kremlin-led Eurasian Economic Union (EEU).

“Armenia has purchased a ticket on the Titanic, which has already collided with an iceberg, and our future was the price for the ticket,” asserted political analyst Ruben Mehrabian of the non-governmental Armenian Center for Political and International Studies in Yerevan.

Economist Vahagn Khachatrian, a member of the opposition Armenian National Congress, which does not officially oppose EEU-membership, agreed, calling the economy’s struggles “unenviable.”

“The situation will get worse at least during the coming six months,” he predicted. Already, an estimated million people, or roughly a third of the Armenian population, live in poverty.

Armenian officials are trying to remain upbeat about the EEU. At a December 5 meeting with manufacturers, Armenian President Serzh Sargsyan acknowledged the difficulties surrounding the dram, but downplayed the notion that the current economic troubles would be exacerbated by EEU membership.

“Why are national currencies depreciating in other countries as well?” he asked, according to a transcript of the speech posted on the presidential website. “Armenia cannot go against the current, and, in this case, the government and the Central Bank should strengthen their efforts to alleviate the impact from the outer world.”

The Central Bank on December 8 began intervening aggressively to support the dram’s value against the dollar. As of December 16, the dram-dollar rate stood at 520 to one. Officials stressed earlier this month at a government meeting that the Central Bank’s international reserves, which stood at $1.67 billion in October, were sufficient to support the dram, Armenian news sites reported.

Khachatrian, the economist, wants to see a more radical approach, including the elimination of government-friendly monopolies in the food sector, which many Armenians believe contribute to higher prices.

State Commission for the Protection of Economic Competition Chairperson Artak Shaboian assured the cabinet on December 12 that the commission will focus on commodity markets “where large companies operate,” but he did not elaborate, news sites reported.

He claimed that, since late November, commodity prices have risen less sharply – from 4 percent to 12 percent – than the dollar’s rate against the dram (13 percent).

Even so, many Armenians have little reason to look forward to the coming year. “We don’t know whether to spend money on medicine, food or the utilities bills,” said Greta Sarukhanian, a 65-year-old pensioner as she searched for affordable and suitable food for her diabetic husband.