The post has been empty since May, after the entire ministry leadership resigned in frustration with the country’s foreign policymaking. Now it will be filled by a political loyalist. 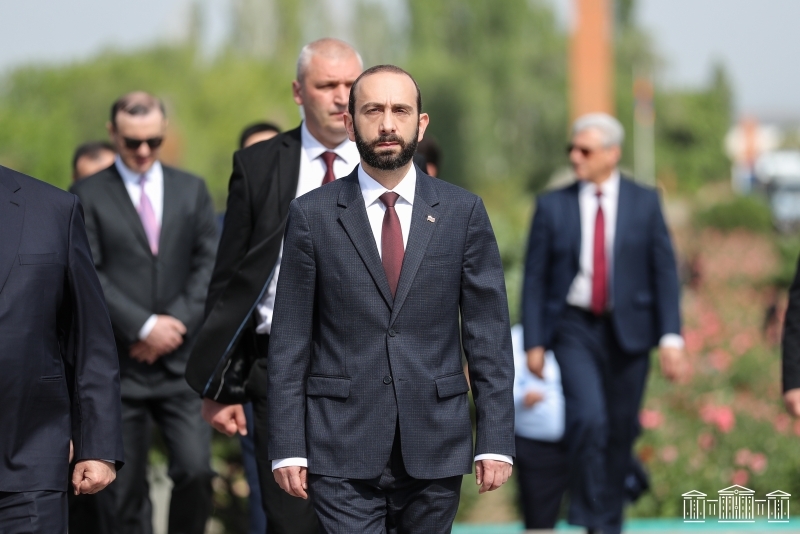 Ararat Mirzoyan, as speaker of parliament, during a May visit to the Sardarapat memorial complex. (photo: parliament.am)

Following a two-and-a-half-month vacancy, Armenia has a new foreign minister: former speaker of parliament Ararat Mirzoyan, who has no diplomatic experience but enjoys close ties to Prime Minister Nikol Pashinyan.

The post has been empty since late May, when Ara Ayvazyan abruptly stepped down. Resignations of his top deputy and spokesperson followed close behind, amid reports that Pashinyan had been micromanaging foreign policy and making substantial decisions without consulting the ministry.

Ayvazyan was temporarily replaced by Armen Grigoryan, who slid into the post on an acting basis in mid-July after having served as head of the National Security Council.

But Grigoryan’s appointment was mildly controversial, as he was an openly pro-Western figure, having worked for years for NGOs including Counterpart International and Transparency International and with a record of criticizing Russia, Armenia’s main strategic ally.

“Many saw him as dangerously pro-Western, raising concerns over Russia's reaction," Richard Giragosian, the head of the Yerevan think tank Regional Studies Center, told Eurasianet. "Mirzoyan seems to represent a more acceptable compromise candidate over others, with less controversy than Grigoryan." Grigoryan has now returned to his old position at the National Security Council.

The 41-year-old Mirzoyan has no prior diplomatic experience, and served as speaker of parliament from 2018 until this June’s snap elections. Immediately following the signing of a ceasefire agreement on November 10 following the war with Azerbaijan, an angry mob attacked him outside the parliament building. He was badly beaten and required hospitalization.

It became clear this summer that Mirzoyan was being prepared for some executive job given that he wasn’t a candidate for the speaker position in the new parliament.

"By this appointment, the prime minister is seeking a loyal foreign minister to implement, but not to initiate, foreign policy,” Giragosian said.

Giragosian deemed Mirzoyan’s appointment the third in a series of major Armenian foreign policy surprises, following Ayvazyan’s resignation and Grigoryan’s appointment. “One can only hope that this is the last of such surprises and await a new period of appointments based more on policy and professional competence and less on political or personal loyalty,” he said. “Thus, the only real conclusion is that Armenia needs to formulate a new post-war diplomatic strategy, and urgently, as any luxury of time is rapidly fading."