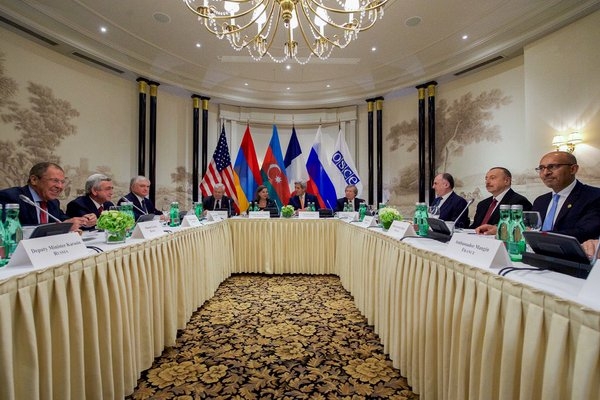 The presidents of Azerbaijan and Armenia, and senior diplomats from the U.S., Russia, and France, meet in Vienna. (photo: U.S. State Department)

Armenia and Azerbaijan agreed to strengthen the international monitoring of the front lines between their armed forces, a potentially significant step that could make it possible to identify the causes of the increasingly frequent flareups in violence between the two sides.

The agreement emerged from a meeting between the presidents of the two countries in Vienna on Monday night brokered by the Organization of Security and Cooperation in Europe and the United States, Russia, and France. The high-level involvement in the conflict follows what has come to be known as the "four-day war" in early April, the worst violence since the two sides signed a ceasefire agreement in 1994.

An OSCE statement after the meeting between Armenian President Serzh Sargsyan and his Azerbaijani counterpart Ilham Aliyev reported that the two sides "agreed to finalize in the shortest possible time an OSCE investigative mechanism. The Presidents also agreed to the expansion of the existing Office of the Personal Representative of the OSCE Chairperson in Office."

The paucity of resources of the current monitoring regime, with only six monitors covering a long, remote, line of contact, has made it nearly impossible to determine what is behind a ceasefire violation. And while the OSCE statement is vague, expanding the OSCE monitoring office and creating an "investigative mechanism" could ameliorate some of those problems.

A senior U.S. State Department official, speaking before the meeting, highlighted the importance of improving the monitoring regime:

Well, right now there are only six monitors. And that allows monitoring missions to take place two or three times a month. That’s just not sufficient. We’d like to see more monitoring missions in more geographic areas. And if the sides would agree to that, that could be very helpful. One of the problems along the line of contact and international borders is that it’s very difficult to know who initiates the violence. Each side accuses the other. And that was the case on April 2nd. We’d like to have a monitoring mission with the kinds of tools that could identify who – where and when and who is involved when violence breaks out.

The agreement represents a concession on the part of Azerbaijan, which has in the past refused an expanded monitoring mission on the grounds that it would solidify an illegitimate status quo. Karabakh is internationally recognized as part of Azerbaijan but has been occupied by Armenian forces since the early 1990s.

After the meeting, Sargsyan said that the agreement is "advantageous for us" because the Armenian side never fired first. suggested that establishing the monitoring mechanism may be a precondition for further meetings with Aliyev: "As far as it is planned to create a system of monitoring ceasefire violations at the line of engagement we suggested such monitoring be established before another meeting of the presidents," he said. "It would be a constructive approach of the parties." Perhaps tellingly, the Azerbaijani statements after the meeting did not mention the monitoring agreement.

While this agreement may be cause for hope in the medium-term, in the short term things remain precarious in Karabakh: Two soldiers, one from each side, were killed shortly following the Vienna meeting.