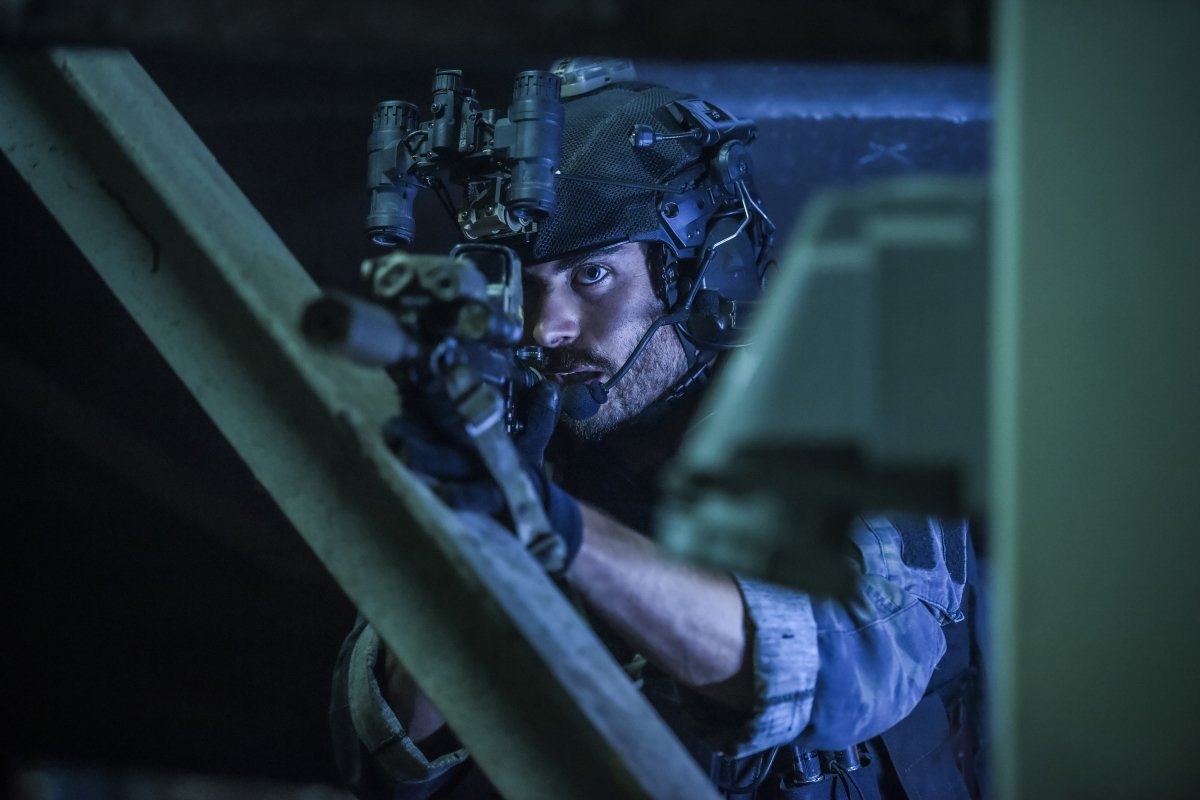 A U.S. Navy Seal takes aim at an "enemy" -- perhaps Armenian militias? -- in an Azerbaijani power plant during a recent episode of an American TV series. (photo: Seal Team twitter)

An elite team of American special forces airdrops into Azerbaijan to defend a strategic power plant against “enemy” “Armenian militia” who have taken it over in an attempt to force concessions over Nagorno-Karabakh.

That’s the plot of a new product from the U.S. military-entertainment complex, an episode from the TV drama Seal Team that aired October 16. The show’s geopolitics caused an immediate controversy among Armenians and speculation that Azerbaijan may have somehow had a hand in developing the scenario.

Seal Team – a middle-of-the-rankings show that averages about 5 million viewers per episode – follows a band of Navy Seals around the globe as they defuse one conflict after another. Given the number of hot spots the team churns through it is probably inevitable that they would hit the Caucasus, but their take on the conflict took a noticeably pro-Azerbaijani framing.

“Twelve hours ago, Armenian forces violated their ceasefire with Azerbaijan in the disputed Nagorno-Karabakh region,” the team’s intel officer says as she briefs the sailors.

“That’s a dangerous game of chicken,” one Seal observes. “Why the hell do we care about turf wars between countries that I can’t even spell?” asks another in a good-ol’-boy accent.

The no-nonsense intel officer educates him: “Azerbaijan is our only ally in the Caspian Sea… With Russia and Iran stirring the pot, we really don’t want to lose any traction.”

Someone has taken advantage of the ceasefire violation somehow to plan an attack on a critical power plant in Azerbaijan, and the Seals are flying across the ocean to prevent the attack. Who are the potential suspects? “Armenian loyalists, Shiite militia, foreign powers looking to reduce American influence in the region,” the intel officer suggests. (It is perhaps noteworthy that the fact that Azerbaijan is itself majority Shiite is never mentioned.)

Eventually the team settles on the explanation that the attackers are an “Armenian militia,” seeking to “hold the plant and use it to force concessions over Nagorno-Karabakh.”

Nearly all of this geopolitical exposition was laid out in a brief scene, a clip of which was tweeted by Azerbaijan’s consul to Los Angeles, Nasimi Aghayev, just before the show aired.

Aghayev’s promotion of the series raised suspicions that this was a new frontier in Azerbaijan’s multifaceted efforts to promote its views of its conflict on any platform available. Aghayev did not immediately respond to a query for comment from Eurasianet, nor did PR people for CBS, the network that aired the show. (This post will be updated if they respond.)

But the show does seem to have a history of taking “incentives” from foreign governments for positive coverage. Four episodes of Seal Team were filmed in Belgrade, and the Serbia Film Commission described its cooperation with the show in a press release:

“The show is highlighting the city of Belgrade as a modern international capital, full of culture and beauty, and with Serbian people playing positive roles,” the commission said. “The show’s producers were drawn by great locations, the collaboration of the Serbian Government and the experience of local film professionals. The film incentive was also a key element in attracting CBS to shoot here.”

Moreover, the scenario tracks closely to the talking points Azerbaijan uses in the West: that it is a loyal U.S. ally (though Georgia would take exception to the notion that it is the “only” one in the region) stuck between Russia and Iran. The mention of a ceasefire violation and the notion of concessions over Karabakh suggest that the writers got some briefings from someone knowledgeable on the conflict, and the repeated references to Armenians as the “enemy” suggests that the consultant’s name didn’t end in “-yan.”

There is one line that stood out: “This is a clandestine operation,” one of the sailors explains. “The Azerbaijani government doesn’t want to appear weak enough to need help.” This is both true (see these Wikileaks about U.S. assistance to Azerbaijan in a naval standoff with Iran) and not something that Baku would like to be advertised. So whatever influence Azerbaijan had over the script, it wasn’t total.

At the end of the episode, though, there is a twist: we learn that the enemy is not in fact Armenian militia, but Iranian mercenaries, whose motives appear to be purely destabilization of the region. We learn this because in the course of the fight, the shadowy enemy fighters deploy a small drone. It looks like the kind of thing a child would play with, but it is apparently too sophisticated for Armenians.

“No way that’s Armenian militia,” one of the American soldiers muses. “Who the hell are we fighting?” Further digging reveals it to be Iranians – who in fact do play a role in Azerbaijan’s threat perception, though not one they like to advertise as much as Armenians.

It's not clear what kind of influence a show has like this over Americans’ perceptions of the conflict, but for the large majority of those 5 million viewers it’s likely the first time they’ve ever heard of Azerbaijan or Nagorno-Karabakh. And Armenian-American groups immediately objected.

“Is #CBS on Aliyev’s Payroll?” tweeted the Armenian National Committee of America, referring to Azerbaijan President Ilham Aliyev. “That’s the only explanation for the absurd story-line in tomorrow night’s @SEALTeamCBS episode where ‘Armenian loyalists’ and ‘Shia Militia’ target an Azerbaijani power plant after an Armenian attack on Azerbaijan.”

ANCA called on its supporters to object to CBS. The largest concentration of Armenians in the U.S. is in Southern California, also the home to the American entertainment industry. Might we look forward to a makeup episode some time in the future when the Seals head to Armenia to help that U.S. ally against its "enemy?"