Strikes have hit Stepanakert, Ganja and other targets, marking a dangerous escalation in the week-old war. 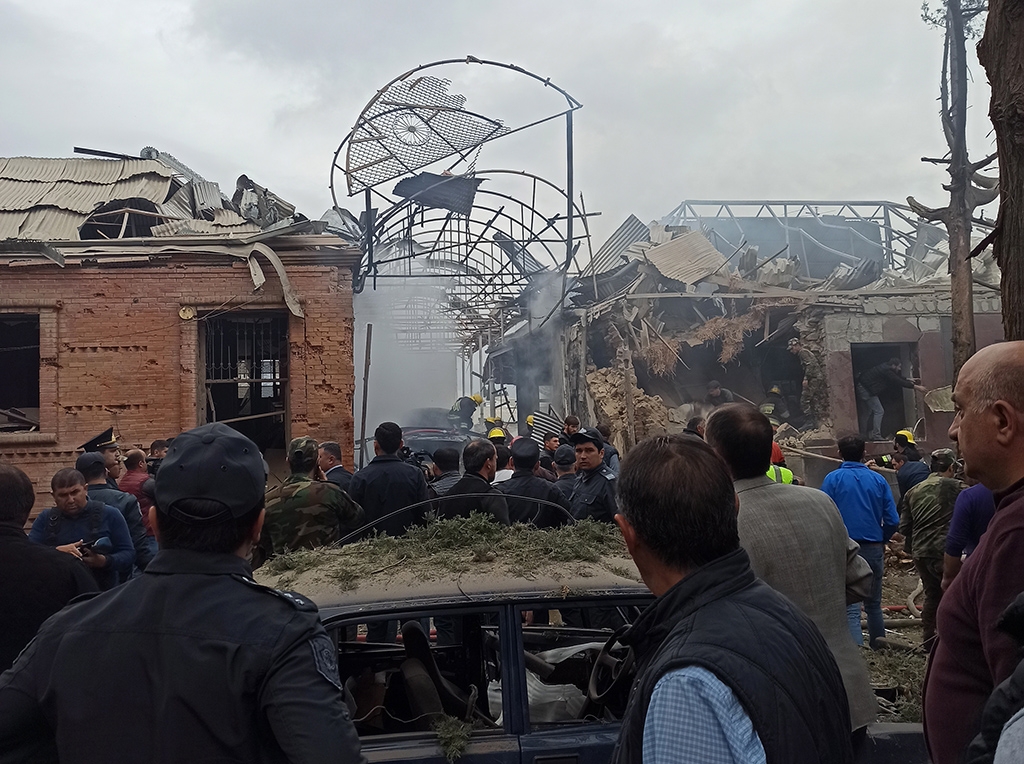 The conflict zone in the fighting between Armenia and Azerbaijan continued to expand, as Azerbaijani forces have hit the de facto capital of Nagorno-Karabakh, Stepanakert, and Armenian forces responded by hitting Azerbaijan’s second-largest city, Ganja.

With this escalation into areas far from the front lines between the two sides, following a seeming lull in the fighting over the previous days, the war has entered a new, more dangerous phase.

Azerbaijani strikes on Stepanakert began on October 2. Targets reportedly included electricity infrastructure, which resulted in the city losing power on October 3. According to journalists reporting from the city, the strikes have continued since then. “There were several strikes today in the city, one of which hit a parking lot near a fire station, another an army headquarters,” American photojournalist Brendan Hoffman wrote on his Instagram page on October 3.

“The Azerbaijani terrorist army is targeting civilians in Stepanakert, using Polonez and Smerch MLRS,” said Arayik Harutyunyan, the de facto leader of Karabakh, on October 4. “From now on military objects in large cities of Azerbaijan are the target of the Defense Army of Artsakh [the Armenian word for Karabakh]. Calling on Azerbaijani population to leave these cities to avoid inevitable loss.”

Azerbaijan has only obliquely commented on the strikes against Stepanakert. In an October 4 briefing, Hikmet Hajiyev, Aliyev’s top foreign policy adviser, said Armenian forces had been carrying out strikes in Azerbaijan proper from military facilities in the city. “Most of the artillery and missile attacks are carried out from artillery bases near the town of Khankendi [the Azerbaijani name for Stepanakert],” he said. “The Azerbaijani armed forces destroy the firing stations through targeted and exact fires and take adequate measures in order to provide safety of civilians.”

Azerbaijani forces also hit the road connecting Armenia to Nagorno-Karabakh on October 2. Video from the scene appeared to show a rocket striking it, and Armenian officials said it was an Israeli-made LORA quasi ballistic missile.

Closer to the front lines, Azerbaijan reported the capture of several villages including Madagiz, thus far the only populated area to change hands during the fighting. It was not immediately clear what happened to the civilian population of the area but other towns near the front line had been evacuated of civilians.

The capture of Madagiz was announced personally by President Ilham Aliyev, who immediately renamed it Sugovushan. Azerbaijani armed forces filmed a soldier taking down the flag of the de facto Nagorno Karabakh Republic, kicking it aside, and raising the Azerbaijani flag in its place. Azerbaijanis also captured the village in the 2016 “April War” between the two sides, though Armenians then recaptured it some days later.

On October 4, Aliyev announced that Azerbaijan had captured the town of Jabrayil, the former administrative center of one of the occupied territories surrounding Karabakh.

It had appeared initially that Azerbaijan’s aim for this offensive, which began on September 27, was to capture far more territory than it had been able to do under previous operations, though perhaps not all Armenian-controlled Azerbaijani territory.

But the first few days of fighting didn’t seem to produce much of a change on the battlefield.

“As terrain shifts, with heights or observation posts captured and then recaptured, materiel losses have quickly mounted,” wrote military analyst Michael Kofman in a piece looking at the early results of the fighting. “Both sides are losing ground equipment, air defense systems, drones and sustaining casualties. Azerbaijani forces have met stiff resistance in ground advances, but are attriting Armenian defenses from the air.”

There could be multiple reasons for the escalation, added Laurence Broers, an analyst of the conflict and Caucasus Program Director at Conciliation Resources.

“Were previous days aimed at softening up Armenian defenses, pending more concentrated land assault today?” Broers tweeted on the evening of October 3. “Or has the previous fighting not yielded intended results, needing more concentration of forces? Impossible to say for now.”

Following the broadened Azerbaijani offensive, Armenian Prime Minister Nikol Pashinyan delivered an address to the nation that used unusually apocalyptic terms. “With joint efforts, we will break the adversary’s backbone so that it could never raise its murderous hands-on us so that its bloody gaze could never fall upon our people,” he said.

The response that Armenians promised was not long in coming.

On October 4, Armenian forces struck targets in Ganja. Armenian officials said they had “completely destroyed” the military airport there, but the Azerbaijani Ministry of Defense denied those claims. The Azerbaijani side published videos of a building destroyed in the city and said that one civilian had been killed in the attack.

“Attacking major population centers of #Azerbaijan across the international border from #Armenia is a dangerous escalation,” tweeted Azerbaijan’s ambassador to the United States, Elin Suleymanov. “@NikolPashinyan is trying to widen the conflict, involve other nations hoping to stay in power. Do #Armenians really want to suffer for his deadly incompetence?”

Azerbaijanis have reported the deaths of 21 civilians, and the Armenian side 13.

The International Committee of the Red Cross, which has been working on both sides of the front line, issued a statement on October 2 warning that: “As the recent escalation of the Nagorno-Karabakh conflict worsens, civilians are bearing the brunt of the surge in violence.”

With additional reporting from Ani Mejlumyan and an Azerbaijani journalist.