“The coming days will be decisive,” the de facto leader of Karabakh announced as Azerbaijani forces advanced toward Shushi. Baku may see the capture of the town as critical leverage to achieve a favorable political settlement. 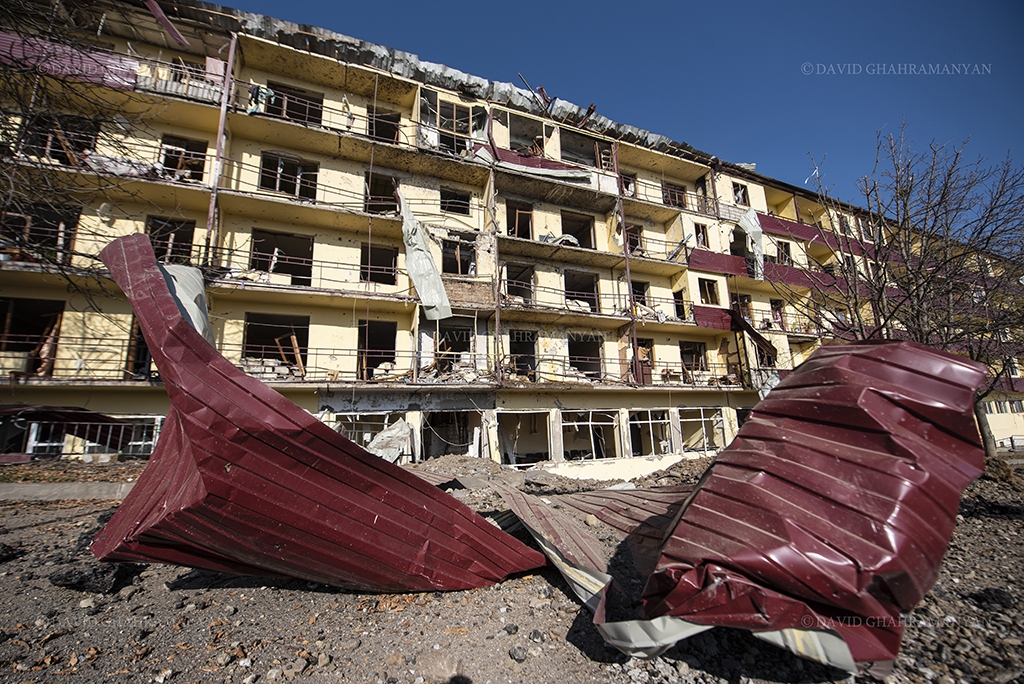 Fighting between Armenians and Azerbaijanis has reached the vicinity of the town of Shushi, both a strategic and symbolic pivot in the war.

In a public address on the evening of October 29, Arayik Harututynan, the de facto leader of Nagorno-Karabakh, spoke from Shushi and said that Azerbaijani forces had advanced to within five kilometers of the city.

“The main goal of the enemy is to seize Shushi,” he said. “As they say, who controls Shushi controls Karabakh.”

“The coming days will be decisive,” he continued. “That is why we must unite, why we must fight, why we must punish the enemy. For that it is necessary as quickly as possible to come to Karabakh.”

Harututynan’s words were unusually blunt, and his assessment was quickly amended by the spokesperson for the Armenian Ministry of Defense, who said that the Azerbaijani forces were more like seven kilometers away. “In essence, [Harututynan] was calling people to defend their homeland, which is normal,” said the spokesman, Artsrun Hovhannisyan.

Azerbaijani forces have been advancing steadily westward along a long strip of land on the southern edge of previously Armenian-controlled territory, along the border with Iran. They appear poised to then turn to the north and cut off Karabakh’s critical artery, the road that leads from Armenia through Lachin, Shushi, and the capital, Stepanakert.

“The Azerbaijani offensive is shifting away from its earlier focus on the crucial Lachin road, the last remaining lifeline connecting Karabakh to Armenia proper, and seems to be preparing an assault on that strategic city [Shushi],” wrote Richard Giragosian, the head of the Yerevan think tank Regional Studies Center, in an October 30 analysis distributed to journalists.

That will be far tougher terrain to conquer, however, as between the newly Azerbaijani-controlled territory and that corridor are forested mountains, not the flat plain that Azerbaijani forces managed to take already.

“If they are able to do it [capture Shushi] in a couple of days, which is not easy, it will be maybe not the end of the war, but a catastrophe for the Armenians,” said Alexander Iskandaryan, head of the Yerevan think tank Caucasus Institute, in an interview with Eurasianet. “If they don’t, what can they do from there? Fighting on the ground, they are not as effective as they are with artillery and aviation.”

Shushi sits on a near-impregnable height; the Armenians’ seizure of it in 1992 was the decisive battle in the first war with Azerbaijan. The commanding height that the city occupies allowed Azerbaijani forces, as long as they held it in that war, to easily bombard the nearby capital of Stepanakert.

“Air cover is essential, but over-extended supply lines only suggest a slow methodical campaign well into tomorrow afternoon, with the more precise timing of taking [Shushi] depending on the scale and pace of their [Azerbaijanis’] progress,” Giragosian wrote.

Azerbaijanis consider the city – which they spell Shusha – to be their historical capital in Karabakh, and President Ilham Aliyev has increasingly spoken of retaking the city as one of the current offensive’s key goals. In an October 16 interview with Turkish television, Aliyev said that “without Shusha our cause will be unfinished.”

Zaur Shiriyev, a Baku-based analyst for the International Crisis Group, wrote on Twitter that “it remains unclear whether this [capture of Shusha] is a military or political target.”

“The military offensive indicates that it is still a target – but everyone knew that it would be a costly one,” Shiriyev added. “Even before the war it was accepted that Azerbaijanis’ attitudes to any future peace deal were highly dependent on how effectively that deal provides for the Azerbaijanis’ return to Shusha. The inability to return to Shusha is perceived as proof that Azerbaijan cannot secure a dignified peace by peaceful means.”

Meanwhile, the foreign ministers of Armenia and Azerbaijan were scheduled to travel on October 30 to Geneva to meet the co-chairs of the OSCE Minsk Group, diplomats from the United States, France, and Russia who mediate the talks between the two sides. Those meetings were postponed from the day earlier. It is not clear if the foreign ministers themselves will meet.

In spite of three ceasefire agreements signed in recent weeks, Azerbaijan’s offensive has continued apace, and Baku has shown little interest in stopping the fighting as long as it continues to advance on the battlefield.

The seizure of Shushi could be intended to create “a symbolic political victory perhaps necessary for them [Azerbaijanis] to return to diplomacy,” Giragosian wrote.

Recent days have been among the most brutal in the war so far. An Armenian rocket strike on the Azerbaijani city of Barda on October 28 killed 21 civilians and wounded 70, the single deadliest incident of the war. Azerbaijani attacks on population centers of Karabakh like Stepanakert and Shushi also appear to have escalated in recent days.

Azerbaijan has reported 90 civilians killed during the fighting; it is not announcing military casualties. On the Armenian side, at least 39 civilians have been reported killed and 1,166 soldiers.