Armenia-Azerbaijan: Is Monitoring of Occupied Territories Back on the Table? 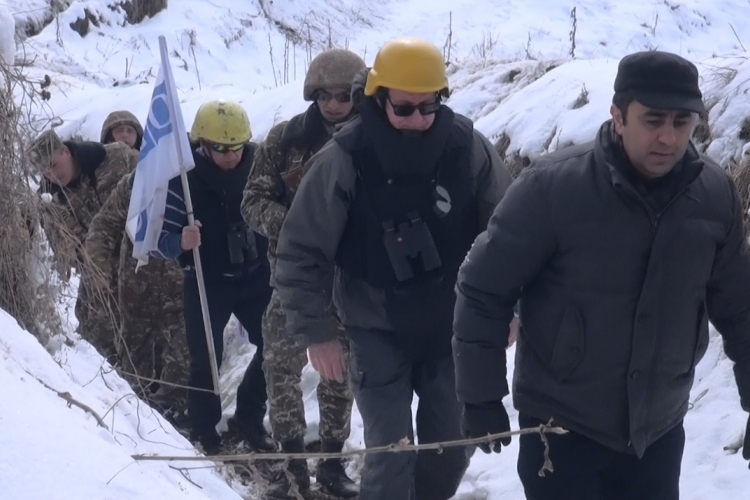 Monitors from the OSCE, accompanied by Armenian troops, monitor the line of contact between Armenia and Azerbaijan in 2017. The two sides have agreed, in principle, to improving monitoring of the conflict zone. (photo: mil.am)

Armenia and Azerbaijan have agreed to increase the size of the international mission monitoring their conflict over Nagorno Karabakh, as well as to reopen discussions over an assessment mission aimed at determining how many people have settled in the Armenia-occupied territories surrounding Karabakh.

The agreements came out of a January 18 meeting between the foreign ministers of the two countries, Edward Nalbandian of Armenia and Elmar Mammadyarov of Azerbaijan. The results were modest, as expected, but that there was progress at all has been counted as a good sign that the two sides, for now, prefer talking to fighting.

According to a readout of the meeting by the OSCE Minsk Group, which mediated, the two sides “agreed in principle” to expand the office of the OSCE's ceasefire monitoring mission, “with a view toward finalizing it as soon as possible.”

The OSCE mission is tasked with watching over the increasingly shaky cease fire between the two sides. Armenian forces control Karabakh after winning a war with Azerbaijan in the early 1990s, and Azerbaijan has repeatedly vowed to take it back -- if necessary by force. Cease fire violations have become more common and involve heavier weaponry, far surpassing the small mission's capacity to keep track of what is going on.

The proposed expansion of the monitoring mission got the most attention from media after last week's meeting, especially in Armenia, as it appeared to be a concession by Azerbaijan. Baku has generally opposed strengthening monitoring along the line of contact between the two sides, believing it to be a reinforcement of the de facto border of Karabakh, which it considers illegitimate.

However, the two sides appear to remain far apart on crucial details. In particular, Baku has long been amenable to expanding the number of monitors – currently only six – as long as they continue to be based in Baku, Yerevan, and Stepanakert (the de facto capital of Nagorno Karabakh), as they are now. Yerevan, meanwhile, wants them to be also deployed to Martakert, close to the line of contact. There has been no apparent movement on this impasse.

A potentially more significant outcome from the meeting is that the co-chairs of the Minsk Group – representing the United States, France, and Russia – “indicated to the Ministers their interest in further discussing the possibility of conducting a follow up to the 2010 assessment mission to the territories affected by the conflict.”

This refers to an effort aimed at assessing the state of settlement in the seven territories surrounding Karabakh that Armenian forces occupy as a security buffer. Azerbaijan has long complained that Armenia is settling civilians (including refugees from Syria) in the occupied zone, thereby creating facts on the ground that will make it more difficult for Armenia to hand back the territories to Azerbaijan.

“Since 2010, there have been no repeat missions led by the Minsk Group. Azerbaijan is interested, but according to officials, attempts have been blocked by Armenia,” wrote Zaur Shiriyev, regional analyst and regular Eurasianet contributor, in a recent article in the journal Security and Human Rights. “The numbers of refugees and scale of the settlement remains unclear. This development causes concern, namely that settlements in the occupied territories will become problematic in the event that Azerbaijani IDPs [internally displaced persons] return to the region.”

Azerbaijan's push for international monitoring in the occupied territories recently expanded to include UNESCO. Mammadyarov met with officials from UNESCO on January 16 asking them to help investigate because “Armenia deliberately destroys cultural monuments in the occupied Azerbaijani territories,” he said.

Armenian settlement has been steadily growing in the occupied territories, which if it were better documented could expose Armenia to charges that it is violating international law by settling civilians in a militarily occupied territory.

But Yerevan may still consider such a mission beneficial to them, said Olesya Vartanyan, a South Caucasus analyst at the International Crisis Group. “I think some representatives of the Armenian leadership may be interested in showing that the return of the territories would be in any event a complicated task, and can't happen just by withdrawing the Armenian forces, as Azerbaijan says,” she told Eurasianet.org.

In any case, the fact that the two sides are talking at all is something that can't be discounted. “The negotiations long ago became a parody of themselves” because of the two sides' intransigence, Azerbaijani analyst Shahin Rzayev told regional news site Jamnews. “But in any case there is a definite plus: as long as the negotiations, or even an imitation of negotiations, continue, the likelihood of a new round of escalation decreases.”