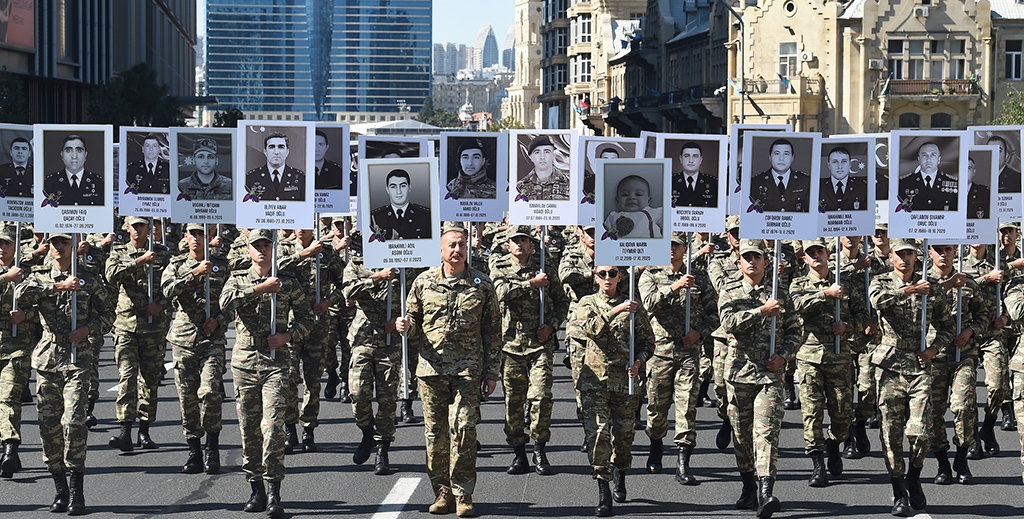 President Aliyev and his wife, First Vice President Mehriban Aliyeva, led a march of 3,000 soldiers in Baku to commemorate the dead. (president.az)

A year after the outbreak of war between Azerbaijan and Armenia, the two countries commemorated those who were killed in the fighting.

On September 27, 2020, Azerbaijan launched an offensive aimed at retaking the territories it had lost in the first war with Armenia in the 1990s. In the 44 days of fighting that followed, an estimated 7,000 soldiers and civilians were killed and tens of thousands wounded.

Azerbaijan managed to take back most of its lost territory, forcing thousands of ethnic Armenians to flee their homes. Meanwhile, the hundreds of thousands of Azerbaijanis who were themselves forced to flee in the first war have not yet been able to return to their former homes, though the Azerbaijani government has been quickly reconstructing some infrastructure in its retaken territories.

On the evening of September 26, thousands marched to Yerevan’s Yerablur military cemetery, carrying torches in commemoration of those who were killed. Another torchlight march was held the same evening in Stepanakert, the de facto capital of Nagorno-Karabakh.

The Yerevan march was led by former president Robert Kocharyan and members of other opposition parties. "Today is a memorial march. With this march, we show that we do not accept defeat, we will stand up and continue the work of our heroes," said Ishkhan Saghatelyan, the deputy speaker of parliament for the Kocharyan-led Armenia Alliance.

In a sign of the deep political grievances that continue to divide the country, even events like independence day celebrations or memorials to fallen soldiers cannot unite Armenians: Prime Minister Nikol Pashinyan paid a separate visit to Yerablur the following morning.

In both Armenia and Karabakh, a minute of silence was observed at 11 a.m.

Pashinyan also telephoned the de facto leader of Nagorno-Karabakh, Arayik Harutyunyan; Pashinyan’s office said the two men discussed ongoing efforts to “ensure the return of Armenian prisoners of war held in Azerbaijan to the homeland, the solution of security issues, as well as the ensuring normal life in Artsakh [an alternate Armenian name for Karabakh], the improvement of infrastructure and the construction of housing.”

On the morning of the anniversary, the Investigative Committee of Armenia announced an updated official number of deaths during the war: 3,781, including both soldiers and civilians. As of now, the whereabouts of 231 service members and 22 civilians are unknown.

In Azerbaijan, a series of events marking the date took place that mixed the commemorative with the triumphal.

President Ilham Aliyev decreed that the anniversary would be marked annually as Memorial Day, devoted to the soldiers killed during the war. Azerbaijan has said that 2,907 of its soldiers were killed.

Aliyev himself addressed the nation, going over well-worn territory of criticizing what he called Armenian “fascism,” celebrating the military victory and thanking Turkey for its assistance, along with a commemoration of the country’s war dead, whom he said had been avenged.

Aliyev said that the foundation for a new war memorial and Museum of Victory would be laid that day.

Aliyev and his wife, First Vice President Mehriban Aliyeva, attended a march of 3,000 soldiers in Baku to the site of the war memorial and museum.

Azerbaijan also observed a minute of silence, at 12 o’clock.

In Shusha, the historic Karabakh city that was the single biggest prize of the war, a small military parade was held.