The two sides exchanged artillery fire, each blaming the other for starting the clashes. 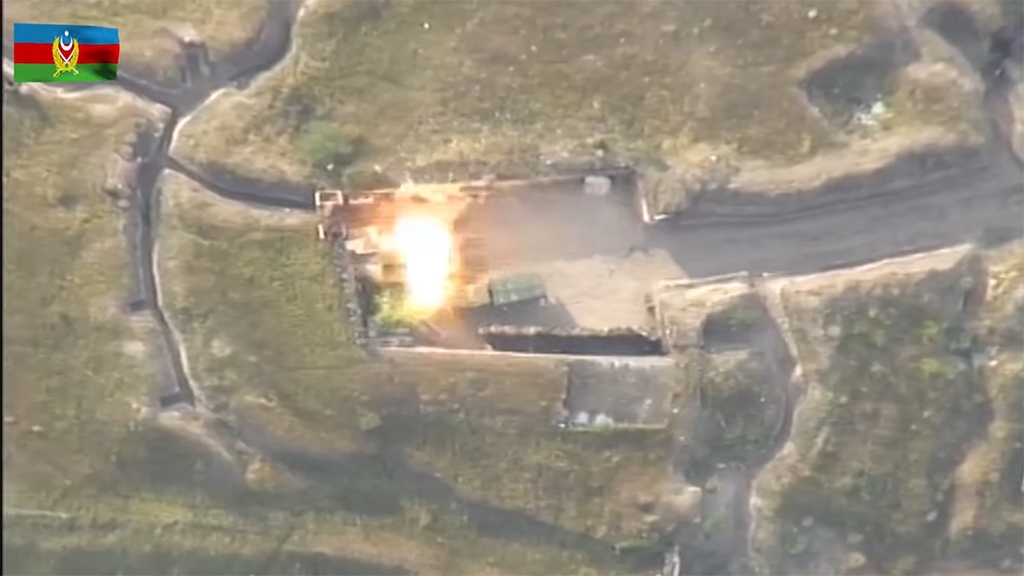 VIdeo from the Azerbaijan Defense Ministry purporting to show an attack on an Armenian position.

A series of clashes on the Armenia-Azerbaijan border has resulted in the deaths of three Azerbaijani soldiers in the heaviest fighting between the two sides in years.

Each side accused the other of starting the fighting, which included heavy artillery fire from both sides.

According to an Armenian military spokesperson, who was the first to report the clashes, they began in the afternoon of July 12. “An Azerbaijani jeep, for reasons unknown to us, attempted to violate the state border of Armenia in the area of Tavush,” the province of northeastern Armenia. “After a warning by the Armenian side, the enemy soldiers left the vehicle and returned to their position.” A little more than an hour later “Azerbaijani soldiers, using artillery fire, attempted to seize our outpost but were pushed back, taking casualties. There were no casualties on the Armenian side,” the spokesperson, Shushan Stepanyan, wrote on her Facebook page.

The Azerbaijani defense ministry, for its part, said that the fighting was started by Armenia in order to capture a strategic position. “The armed forces of Armenia attempted an attack using artillery to capture our positions on the Tovuz direction of the Azerbaijani-Armenian state border,” the ministry said in a statement.” As a result of the adequate steps undertaken by our units, the enemy was defeated and driven back suffering losses.”

Later, Stepanyan said that the Armenian side may in fact be seeking to seize strategic points, but that this would be only in response to Azerbaijani attacks.

“[T]he personnel and command of the Armenian Army are instructed to remain restrained for the time being, and in case of provocations of the enemy on the borders of the Republic of Armenia, react as necessary, up to the capture of new advantageous positions,” she wrote.

Further clashes in the same area were reported overnight, and again in the morning of July 13. They continued throughout the day, Armenia reported that they included drone attacks from Azerbaijan and artillery attacks on civilians. Azerbaijan’s defense ministry also said that Armenia had shelled the Azerbaijani exclave of Nakhchivan.

According to an analysis by the blog Nagorno Karabakh Observer, which closely follows military developments in the conflict, the main clashes took place in an area where Azerbaijan generally occupies the higher ground. The Azerbaijani Defense Ministry released a video on July 13 that purported to show an attack on an Armenian outpost. Nagorno Karabakh Observer said it had identified the post as the only high ground Armenia holds in the area.

The fighting comes less than a week after Azerbaijan President Ilham Aliyev strongly criticized the diplomatic negotiations with Armenia, aimed at ending the three-decade-old conflict between the two sides. Azerbaijan accuses Armenia of negotiating in bad faith and of dragging its feet to maintain the status quo in which Armenian forces control Nagorno Karabakh – internationally recognized as part of Azerbaijan – and occupy several surrounding Azerbaijani districts. In his comments, Aliyev issued a veiled threat that if negotiations continued to go nowhere, it would resort to force as it did in the 2016 “April War.”

But other Azerbaijani officials took pains to argue that it was Yerevan who had started it. “If the Azerbaijani side wanted to cross the Armenian border, which in an undeclared state of war, it would have carried out the attack not with cars, but in armored vehicles,” a defense ministry source told the news website Haqqin.

Aliyev’s foreign policy adviser, Hikmet Hajiyev, accused Armenia of starting the fighting for domestic purposes. “Armenia's leadership aims to escalate the situation, against the backdrop of socio-economic problems deteriorated further by the widespread of COVID-19 in Armenia, caused by its incompetent performance, and distract attention from the domestic problems in the country,” he said in a statement to local media.

Armenia made similar counterclaims. "The aggravation of the situation on the border may be due to the desire of the military-political leadership of Azerbaijan to overshadow the country's internal problems," Prime Minister Nikol Pashinyan said. "Instead of calling on their people to comply with the rules of epidemiological safety, the Azerbaijani leadership advocates military rhetoric and calls for war, as if Armenianophobia is the best way to combat COVID-19."

Following an emergency meeting of the country’s national security council, Azerbaijan President Ilham Aliyev declared that the battle had been a success. “The death of our soldiers has been avenged. All the attempts of the Armenian side failed, Azerbaijan protected its state border and Armenian soldiers could not cross even an inch into Azerbaijani territory,” he said.

Turkey’s foreign ministry quickly issued a statement blaming Armenia for the attack. “We decisively condemn the attack by Armenian armed forces on the Tovuz region of Azerbaijan,” it said. “The counterattack by Azerbaijan clearly shows that Armenia’s aggressive policy will not go unanswered.”

Armenia, meanwhile, appealed to the Collective Security Treaty Organization (CSTO), the Russia-led defense bloc. Foreign Minister Zohrab Mnatsakanyan spoke by telephone with the organization’s secretary general, Stanislav Zas, reporting that Azerbaijan had violated the ceasefire and “underscored the unacceptability of such actions against a member state of the CSTO.”

The CSTO announced July 13 that it would convene an extraordinary session of its security council later in the day to discuss the situation, but then canceled the meeting and even went so far as to delete the original announcement from its web page.