In the worst fighting between the two sides in years, the two countries’ media have been reporting opposing, but parallel, stories. 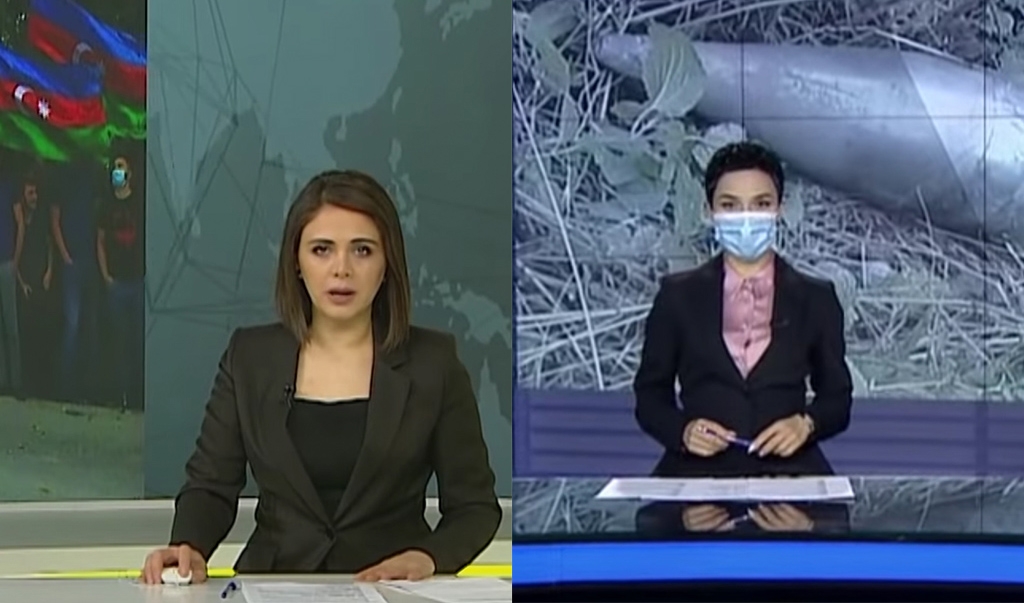 In both countries’ media, it is taken for granted that the other side started the fighting (nightly news in Azerbaijan and Armenia on July 14)

Local media in Armenia and Azerbaijan have for the last 10 days been dominated by news of the fighting between the two sides. The stories they tell are remarkably similar, just with the roles reversed.

Azerbaijan’s nightly public ITV news broadcast on July 14, for example, led with the news of “retaliatory operations against Armenian forces,” as a result of which an Armenian artillery unit “has been destroyed by the precise fire of our units.” It then carried a dispatch from the village of Aghdam, near the frontline of the recent fighting, where a 76-year-old man had been killed and civilian buildings damaged. “This is not the first time that Armenian forces deliberately target Azerbaijani civilians,” the reporter said. The broadcast claimed that “up to 100” Armenian soldiers had been killed in the fighting, and that Azerbaijani forces had downed an Armenian drone.

Viewers of Armenian Public Television’s nightly news program at the same time, meanwhile, saw something of a parallel reality. That broadcast led with the deaths of four Armenian soldiers that day, then turning to a report from a town near the frontline, Berd, where civilian buildings had been hit by Azerbaijani fire. It showed an official Defense Ministry video depicting an attack on “Azerbaijani positions that had been used to attack civilian areas,” and reported that while Azerbaijan had officially reported 11 deaths in action, “Azerbaijani social media is reporting that the number of casualties is more than 30.”

As Armenia and Azerbaijan have engaged in their deadliest fighting in years, with 16 on both sides killed thus far, the stories their respective media have been telling their populations are near mirrors of one another. In both countries’ media, it is taken for granted that the other side started the fighting: Our civilians have been attacked, while our military is precisely and lethally targeting only the other sides’ armed forces. The other side is hiding the true extent of their military losses.

In Azerbaijan, the emphasis in the media has been on valorizing the soldiers who have been killed in combat, and on the resilience of the residents of the villages on the frontlines. Media appeared to be making a particular contrast to the 1990s, when many Azerbaijanis were forced to flee their homes in and around the territory of Nagorno-Karabakh due to the fighting with Armenia.

“We have not left, we are in our homes and we are not going to leave,” one resident of Aghdam told the Trend news agency on July 17. “We remained in our village, in our homes in the 1990s as well. We will continue to remain in our village.”

“Let the occupier Armenia hear us, we are witnessing their destruction,” Ganira Pashayeva, a member of parliament from the Tovuz region, where the fighting occurred, told the TV network ATV during a visit to the village of Dondar Gushchu. “We, [people of Tovuz], our families defended these mountains without any weapons in those years. Now are you saying that they [Armenians] will throw five, 10, 15 [shells] and we will abandon our homes? We will not abandon our homes.”

In Armenia, the main news narrative has emphasized the military advantage it has gained, painting itself as the underdog against the better-financed Azerbaijani military. The July 14 Public TV report noted that Armenia had reportedly shot down an Azerbaijani Hermes 900 drone, produced in Israel, which Armenian media have reported costs $30 million. “Shooting down a Hermes 900 drone is unprecedented,” the news anchor said. News reports also have focused on how fewer Armenian soldiers have died, compared to Azerbaijanis – four vs. 12.

For the most part, news coverage has relied heavily on official sources, particularly reports and video from the respective ministries of defense and armed forces. In the few cases where media stray from official information, they have been chastised both by the authorities and by patriotic citizens.

In Armenia, where media are heavily polarized, both pro- and anti-government media nevertheless have largely relied uncritically on official sources. ArmNews, an opposition TV network, reported on July 13 that Azerbaijanis were spreading social media disinformation in the Armenian language claiming that Armenia was hiding its casualties. (At that point, the Armenian side had reported no deaths in combat.) “On [Azerbaijani] social media, news was circulating that the Armenian side had suffered casualties. The disinformation didn’t last long, as Armenian media started to post only information from official sources, and as a result the Armenian information field was cleared of Azerbaijani info trash,” an ArmNews reporter said.

Armenian authorities have occasionally rebuked media for using an inappropriate tone. When the investigative news site Hetq reported on the bombing of a village near the frontline, Aygepar, the National Security Service publicly criticized the report, urging media to “not incite panic.” Hetq responded: “The NSS is trying to play the role of a media censor, which we urge them to refrain from.”

In some cases, Armenian media has policed itself. On July 13, the opposition news website News.am livestreamed a report from the frontline village of Chinari that, to some viewers, appeared to be giving actionable, real-time information like the condition of roads near the fighting.

Other journalists complained that the report was irresponsible. “The only thing more senseless, irresponsible, and harmful than giving a live broadcast from the battlefield would be to give the opponent a map of Armenian military positions,” wrote Artak Hambardzumyan, a producer at the Armenian service of RFE/RL, on Facebook.

One of the few regional media to attempt to tell the story of the other side, Armenia’s Epress, faced significant blowback after reporting, citing Azerbaijani government statements, that an elderly Azerbaijani civilian man had been killed by Armenian fire. “There was an extreme reaction, people saying that we are giving ammunition to the enemy, repeating ‘Aliyev’s propaganda,’” Yuri Manvelyan, an editor at the site, told Eurasianet. “It told us that many of our colleagues had ceased being journalists.”

In Azerbaijan, Armenian reports about battlefield victories have gained particular credence because of a lack of trust in the authorities.

A well-known Azerbaijani opposition journalist, Hebib Muntezir of the Berlin-based Meydan TV, reported on his Facebook page – citing Armenian sources – that the Armenian military had captured a strategic height. He was heavily criticized in the comments by Azerbaijanis claiming he was sharing deliberate misinformation from the Armenian side. Others, though, said that they believed the report and didn’t trust their own defense ministry. (Muntezir later reported, without citing a source, that Azerbaijan had recaptured the height.)

The Azerbaijani independent news site Turan, in an editorial, complained that the Azerbaijani authorities were not responding in enough detail to Armenian reports that were spreading through social media. “Those sitting in the military department do not take into account the psychology of the public, which is not just waiting for statements like, ‘Do not believe the enemy,’ as people have long learned to read and compare, analyze,” the service wrote on July 15. “Therefore, the calls of the military sound unconvincing.”

With reporting by Joshua Kucera, Ani Mejlumyan, and an Azerbaijani journalist.