This newest escalation of the history wars threatens to drag the Caucasus into the larger post-Soviet struggle over the memory of World War II that has poisoned ties between Russia and many of its neighbors. 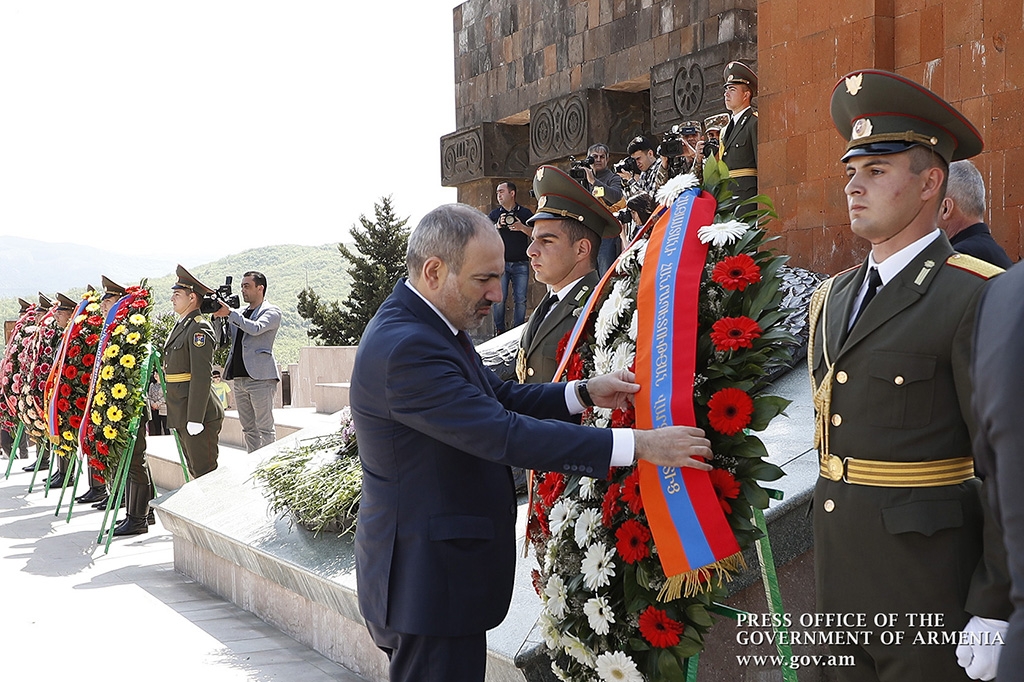 As if fighting over their own past is not enough, the leaders of Armenia and Azerbaijan have expanded the field of battle to include the most contentious historical issue in the post-Soviet space: World War II.

Around this year’s commemoration of Victory Day, Azerbaijani officials have been accusing Armenian Prime Minister Nikol Pashinyan’s grandfather of having been a Nazi collaborator. And Pashinyan has hit back by calling attention to the Azerbaijanis who themselves collaborated with the Third Reich.

On either side, Nazi collaboration was a marginal phenomenon compared with the vast numbers of Armenians and Azerbaijanis who fought for the Soviet Union. But the mutual finger-pointing represents a new escalation in the rhetorical battle between the two countries for the moral higher ground, and threatens to drag the Caucasus into the larger post-Soviet struggle over the memory of World War II that has poisoned ties between Russia and many of its neighbors.

Battles over the region’s history – who are the “original” inhabitants of a particular territory, which side started the conflict between them – are already drearily common. They are particularly sharp in spring, when a number of anniversaries are marked from the war between Armenians and Azerbaijanis in the late 1980s and early 1990s. Ahead of this year’s commemorations, in February, analyst Tom de Waal called for an “Armenia-Azerbaijan history ceasefire.”

Instead, the two sides have taken up higher-caliber arms.

This round of fighting began on May 9, when most countries of the former Soviet Union mark the day that they and their allies won World War II. Armenian Prime Minister Nikol Pashinyan posted a photo on Facebook of his grandfather, Nikolay Pashinyan, who served in the 554th Rifle Regiment of the 138th Rifle Division of the Red Army.

One Armenian opposition website, Yerevan Today, then dug in the archives and found the records of one Nikolay Pashinyan who had in fact fought with the Nazis. Pashinyan’s office denied that this was his grandfather – the one in the archives had a different patronymic – and that for the most part laid to rest the issue in Armenia.

In Azerbaijan, however, it was picked up with gusto. Pro-government websites had a field day with the news, fake or not. “Collaboration of Armenian PM's grandfather with Nazis is disgrace for Armenia,” went a typical headline.

Meanwhile, the Azerbaijani press also was giving heavy coverage to a recently unearthed document from 1945, written by a member of the U.S. Congress, which described an Armenian diaspora political organization, the Armenian Revolutionary Federation – Dashnaktsutyun, as Nazi sympathizers.

And all of this was on top of a long-running PR effort to highlight the story of Garegin Nzhdeh, an Armenian national war hero of the 1910s and ‘20s who collaborated with Nazi Germany during World War II. Nzhdeh remains a hero in Armenia today and a statue to him was erected in Yerevan in 2016.

Azerbaijan has long sought to use Nzhdeh’s lionization in Armenia to gain points – in particular with Russia, where World War II history remains deeply germane to current-day politics and international relations. Moscow, for example, exploits contemporary Ukraine's heroization of nationalist leaders and Nazi collaborators like Stepan Bandera and Roman Shukhevych as justification for its multi-pronged attacks on that country. Russia has occasionally dabbled in doing the same with Armenia and Nzhdeh, though curiously that discourse has disappeared following Pashinyan’s rise to power in 2018, even while the Kremlin distrusts Pashinyan for his alleged pro-Western sympathies.

Nevertheless, Baku keeps trying. At a summit of the Commonwealth of Independent States in Turkmenistan in October, Azerbaijan President Ilham Aliyev directly confronted Pashinyan about the Nzhdeh legacy and the two men argued about it, to the evident annoyance of the other post-Soviet leaders.

During a May 16 press conference, a journalist asked Pashinyan to respond to Aliyev’s accusations about Nzhdeh, and Pashinyan was obviously ready with a counterattack.

“How can Armenia be accused of being a supporter of Nazism, when Aliyev personally organizes the glorification of the Nazi regime? This is unacceptable,” Pashinyan responded.

Pashinyan went on to talk about Mammad Amin Rasulzade, regarded as the founding father of the Azerbaijan Democratic Republic, which lasted from 1918 to 1920. Rasulzade was later exiled when the Soviet Union took over Azerbaijan, and during World War II briefly tried to enlist Nazi Germany in a tactical alliance to restore Azerbaijan’s independence – much like Nzhdeh did with Armenia.

The prime minister also highlighted the Nazis’ “Azerbaijani Legion,” a unit made up largely of Soviet Azerbaijani prisoners-of-war, which the Nazis also did with other ethnic groups from the Soviet Union – including, yes, Armenians. Pashinyan brought along several visual aids, as well, including photos of the uniforms, newspaper, and flag of the Azerbaijani Legion.

Pashinyan also tried to tie Rasulzade to the Azerbaijani Legion – when there was no such link – and described Rasulzade’s treatment in Azerbaijan today, noting that streets are named after him and a stamp was dedicated to him.

Rasulzade’s legacy in Azerbaijan today is more complicated than Pashinyan described, though it has nothing to do with his dealings with the Nazis. Aliyev keeps him at arm’s length, preferring to portray his own father and predecessor, Heydar Aliyev, as the real father of the nation.

Nevertheless, several Azerbaijani officials (though, not Aliyev himself) defended Rasulzade against Pashinyan’s attack.

Farid Shafiyev, the head of a government-run think tank in Baku, argued that unlike Rasulzade, Nzhdeh promoted a racially centered ideology that made him more of a natural fit for the Nazis (and which was embraced by the former Armenian regime’s ruling Republican Party of Armenia). Nzhdeh also helped recruit for the Armenian Legion.

Nevertheless, the mutual finger-pointing obscures the fundamental similarity between Armenians and Azerbaijanis during World War II: the vast majority on both sides fought for the Soviets rather than the Nazis, most of those who did the latter had little choice as they had already been taken prisoner, and the esteem for both Nzhdeh and Rasulzade in their respective countries today has nothing to do with their activities in World War II. However, that seems to matter little now for the leadership in Baku and Yerevan.