Within two or three years, trains between the two countries, via Nakhchivan and Meghri, should be running again.

Armenia has established a working group to prepare plans for restoring a Soviet-era railroad connecting the country to Azerbaijan, the most concrete step Yerevan has yet taken in restoring transportation ties with the country to which it lost a war in 2020.

Azerbaijan began construction on its side of the border shortly after the war, in February 2021. As part of the ceasefire deal ending the fighting, both committed to “unblocking communications” across their borders, which had been closed since the first war between the two in the 1990s.

While Azerbaijan has been avidly working on its reconstruction of the Soviet-era lines, Armenia has been proceeding more cautiously, leading Azerbaijan President Ilham Aliyev to issue repeated threats to open the route by force if necessary.

But toward the end of last year, there were signs of movement on the Armenian side. Armenian Prime Minister Nikol Pashinyan met with Aliyev twice – in Sochi in November, then in Brussels in December – to work out the details of rebuilding the line connecting the two capitals, Yerevan and Baku, via Azerbaijan’s exclave of Nakhchivan. “It was agreed to proceed with the restoration of railway lines, with appropriate arrangements for border and customs controls, based on the principle of reciprocity,” EU President Charles Michel said following the Brussels meeting.

Following that, an Armenian working group was appointed by Pashinyan, the government website announced on January 17. The 10-member group will be coordinated by a former Armenian ambassador to Iran and current Pashinyan advisor, Artashes Tumanyan.

The Armenian section of the railway – from Yersakh to the western border of Nakhchivan, and then from the eastern tip of Nakhchivan, through Meghri and to the border of the Azerbaijani mainland – is projected to cost about $200 million and take three years, said deputy prime minister Mher Grigoryan. 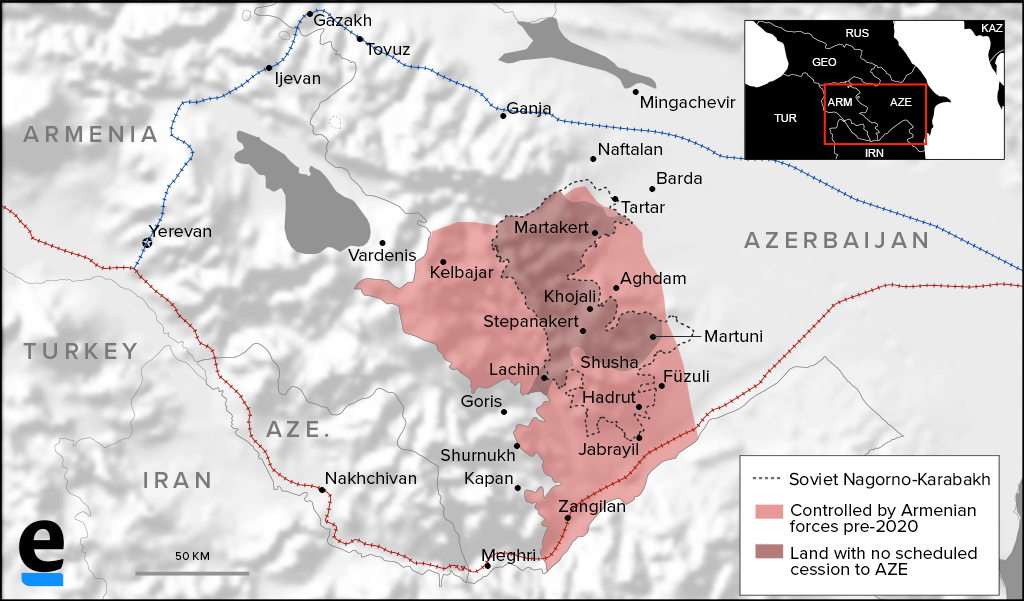 Aliyev has set a tighter deadline, however. "The railroad from liberated territories to the Armenian border must be ready by the end of 2023," he said following the Brussels meeting. “We of course hope that by that time Armenia will complete their part of the homework.”

While the ceasefire statement called for "all economic and transport links in the region" to be "unblocked,” the only such link that it explicitly named was Nakhchivan. The document further specified that Russian forces would provide security on the route. Those details haven't been specified, but Grigoryan said that border and customs control will be carried out by Armenia in its territory.

Pashinyan and other officials have repeatedly emphasized the economic benefits that the new connections promise to Armenia.

"The railway will provide Armenia with access to the Islamic Republic of Iran and the Russian Federation, Azerbaijan will get communication with the Autonomous Republic of Nakhchivan," Pashinyan said on December 14. He added that if Armenia also managed to agree with Turkey to open its long-closed border, the railroad could also connect to Kars, in Turkey, via Gyumri.

But in the aftermath of war, many Armenians are wary of opening their borders to Azerbaijanis. "Let them open the railway, but will it be safe for us? I don't know," one woman in Yeraskh told local news outlet CivilNet when news first broke about the railroad’s potential reconstruction. "In the past people got along like brothers but now... How is that possible?” another resident asked. “So many heads were cut off, so many young people died.”

Under the Soviet Union, Armenia and Azerbaijan were connected by two railway routes: the one through Nakhchivan, and another further to the north via Ijevan in Armenia and Gazakh in Azerbaijan.

Armenians have argued that the Nakhchivan route should be opened only as part of a larger reopening of long-blocked routes around the region, including the Ijevan-Gazakh railway.

"The Ijevan-Gazakh railway, which could connect Armenia to the North Caucasus and is more or less in line with our transport interests, is in fact off the agenda," said the director of the Institute for Energy Security, Vahe Davtyan, in an interview with Sputnik Armenia. By contrast, the Nakhchivan route would allow a railway in eastern Turkey connecting Kars to Igdir to Nakhchivan to link up with another passing from Kars through Georgia to Baku, in effect creating a “railway ring” around Armenia, Davtyan argued. This would create “a big risk to our transportation safety” and allow Azerbaijan to more heavily militarize Nakhchivan, he said.