Armenia: Building a Bridge to Turkey – Literally, This Time 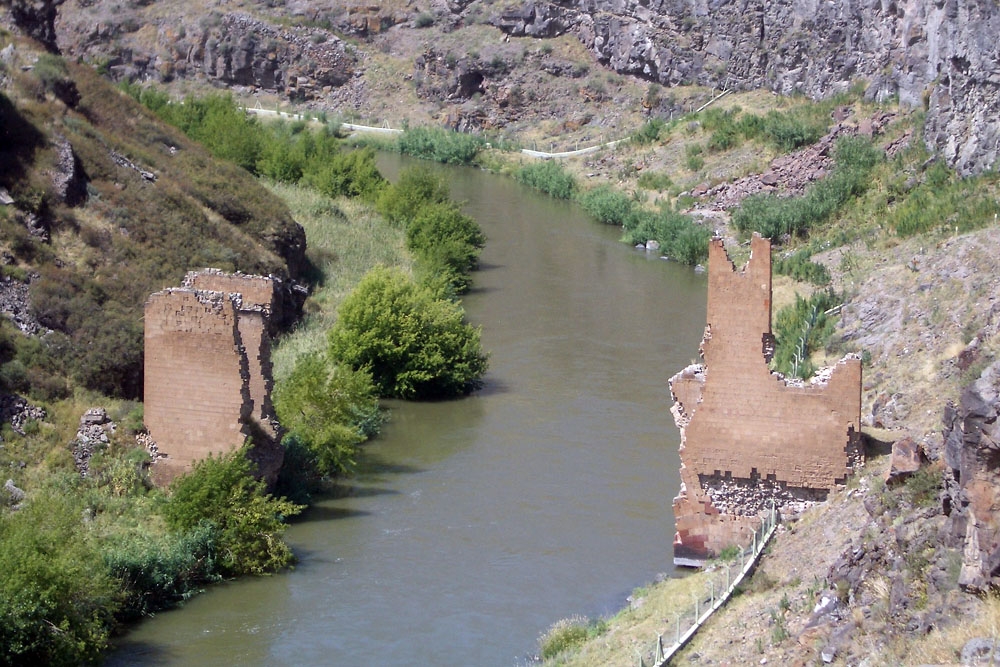 Amidst the freeze on normalizing ties with Turkey, a group of Armenian architects and cultural heritage professionals is pushing ahead with a plan to rebuild a medieval bridge that links Armenia to Turkey.

The 10-11th century bridge across the Akhurian River (Arpaçay River in Turkish) to Turkey once connected the Silk Road with the powerful Armenian city of Ani. Celebrated in the Middle Ages for its “thousand and one churches,” the city, now in ruins in eastern Turkey, remains a hypnotic cultural symbol for Armenians.

The Аrmenian chapter of the International Council of Monuments and Sites, an international non-governmental organization that promotes preservation of cultural heritage sites, proposed the plan to rebuild the bridge.

Giurjian says that the organization’s Turkey branch has also approved the project and allegedly received “a positive response” from the Turkish government. UNESCO has been petitioned for assistance.

Turkish government ministries could not be reached for comment, but the chairperson of one prominent Turkish think-tank has welcomed the initiative and said that he passed on word in February to Turkish President Abdullah Gül about the project.

“[B]ack when we met, the president was quite positive about the project. He said it’s a courageous step,” Economic Policy Research Foundation of Turkey Chairperson Güven Sak said. “Of course, the Turkish side is also quite interested in implementing this project. Cooperation on a public level needs a new stimulus.”

The plan to restore the bridge has sparked excitement in the nearby Armenian border village of Kharkov, from which the half-ruined church domes of Ani, in Turkey, can be seen.

“Everyone is dreaming of seeing Ani, and rather than traveling through Turkey to get there, one could simply cross the bridge by foot -- nice and easy,” enthused 68-year-old Kharkov villager Vazgen Stepanian.

Only the two ends of the stone bridge remain today; one on either side of the river. The structure originally could be opened and closed via ropes and, when needed, elevated to make it impassable from the road, said Samvel Karapetian, head of the Yerevan branch of the Research on Armenian Architecture non-governmental organization. “We have had only a few such bridges, so it is important to restore it,” said Karapetian.

Not all the villagers in Kharkov share the bridge optimism, however. Even if the bridge to Ani is restored, cautioned 37-year-old veterinarian Vardges Gasparian, “ it’ll stay on the other side of the barbed wire” that divides Armenia from Turkey.

“This is all in Turkey’s interest, in order to show the world and say ‘See how kind and generous we are. We are restoring Armenian monuments,’” Gasparian commented drily.

Restoring Armenian cultural sites in Turkey began in 2006 with the reconstruction of the Church of the Holy Cross (Surb Khach in Armenian; Akdamar Kilise in Turkish) on Lake Van – an idea proposed by the Turkish Ministry of Culture. The Turkish government later agreed to start restoration work in Ani as well.

Armenian architectural experts, however, reportedly have not been allowed to take part in the еxcavation and restoration – an absence that raises questions about how closely the buildings will reflect the Armenian architecture of their period, some worry.

Giurjian concedes that Turkey’s work on Ani could be designed to win political dividends, but nonetheless calls for support of the restoration of the bridge and other Armenian cultural sites in Turkey.

“We, too, win from this, because our cultural heritage is preserved rather than being destroyed,” he said.

Armenia’s Union of Architects Chairperson Mkrtich Minasian, one of the project’s initiators, shares that view.

“It is not the two river banks that the bridge is going to link together, but the two countries, so that people -- representatives of both nations -- can slowly start communicating,” said Minasian.

Gayane Abrahamyan is a reporter for ArmeniaNow.com in Yerevan. Photo provided by Henrik Hallgren/New Eurasia Center at http://www.neweurasia.org.