Armenia: Can a Bus Boycott Lead to Shift in the Political Dynamic? 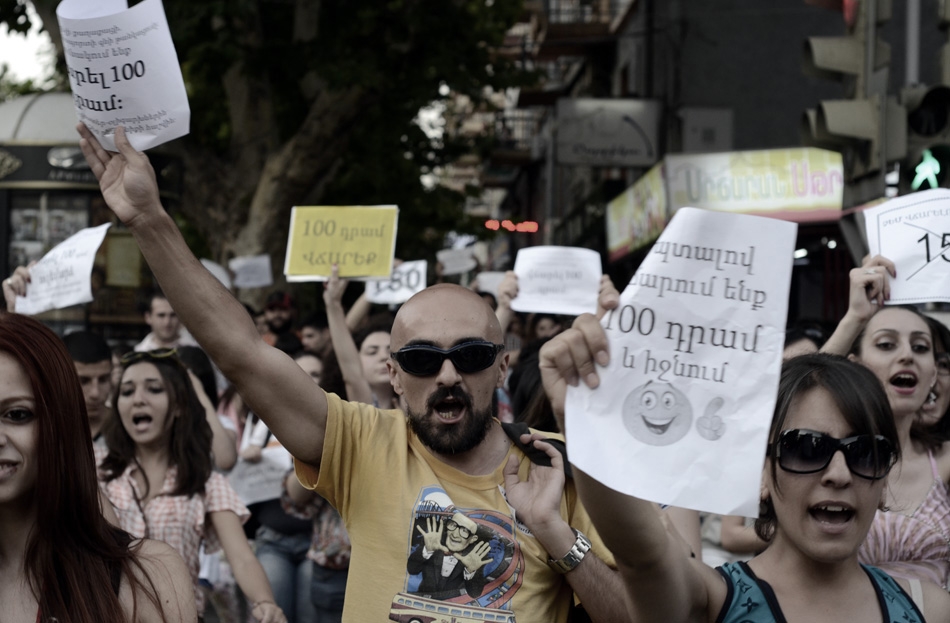 It was a bus boycott in Montgomery, Alabama, back in 1955 that catalyzed the civil rights movement in the United States. These days in Armenia, some observers believe a recent bus boycott in Yerevan may reinvigorate the country’s democratization process.

The Yerevan public transport boycott started July 20, after the city government decided to raise transportation fares in Armenia’s capital city by at least 50 percent – a move that many saw as benefiting private companies with perceived ties to pro-government politicians. Hundreds of protesters, mostly young people, took to the streets to express their anger, boycotting public transportation and standing at bus stops with posters that demanded the city government reinstate the former 100-dram (about 25 cents) fare. To support the campaign, some celebrities also started a carpooling campaign that offered free rides to people all over the city.

The strategy worked. After five days, Yerevan Mayor Taron Margarian, a leader of the governing Republican Party of Armenia (RPA), reversed the price hike, while hinting that an increase was still possible in the future.

“No doubt, this is a victory,” stressed Stepan Safarian, a senior member of the opposition Heritage Party. “Society made authorities understand that [people] will no longer . . . put up with robbery and the violation of its rights.”
Sociologist Isabella Sarksian, a former prominent civil-rights activist, added that the boycott may motivate young Armenians to get more civically active. “Civil society is developing thanks to constant large and small initiatives, through the media, Internet penetration, and so on,” Sarksian said. “The most important thing is that young people have realized their power.”

Boycotters celebrated their victory by drinking champagne and waving Armenian flags in the streets. Yet, given the country’s recent history of mass protests leading nowhere, the question remains about whether the boycott has permanently altered the political dynamic in Yerevan.

Past protests generated large crowds complaining about everything from oligarchs’ alleged immunity from prosecution for wrongdoing to alleged rigging of national elections. But such mass actions didn’t push political leaders to make lasting policy changes. The most recent example of this phenomenon was Raffi Hovhannisian’s short-lived “Barevolution” over the 2013 presidential election results.

Independent political analyst Yervand Bozoian believes the bus boycott could be different. “Authorities were simply terrified by this situation, and we can name this a triumph,” Bozoian said. “The movement put forward a very specific problem and solved it, which means this can be continued in the future.”

Although pushed off balance by the boycott, RPA leaders continue to exude confidence in their authority. Some party leaders stressed that they still control the country’s political agenda. “If the government wants, it can stop the movement in a night,” declared the Republican Party’s fiery deputy chairperson, Galust Sahakian, at a July 25 news conference. The government, however, “has no such wish,” he added.

“I do not want these protest actions to fade away,” Sahakian continued, calling them, in a rare show of RPA support for demonstrations, “very positive.” He urged the public, though, “to show restraint and not act as heroes.”

Some observers expect the government to study the lessons of the boycott and try to take action to prevent similar popular protests in the future. But Tsovinar Nazarian, an activist with The Army in Reality, a group that promotes awareness of alleged abuses in the Armenian army, contends this boycott movement is more resistant to government pressure than previous mass protests.

Nazarian suggested that the boycott had enjoyed more initial success than earlier anti-government outburst, but stopped short of labeling it a “victory.” The boycott’s most significant aspect is it showed that Armenian young people could come up with creative ways to address problems, she said. “Authorities, indeed, are trying and will try to govern the movement through their people and methods, but they will hardly succeed in this,” Nazarian asserted. “Neither will they manage to stop this wave of young people when they face new issues and problems.”

Not all analysts subscribed to the idea that the boycott marks a civil-society turning point. One of the skeptics, independent political analyst Armen Badalian, contended that the boycott was not so much a spontaneous expression of public frustration, but more of an orchestrated initiative designed to erode Mayor Margarian’s political standing. Magarian has been rumored to be a possible Republican Party presidential candidate to succeed the incumbent, Serzh Sargsyan.

“It is impossible for people to go out into the streets spontaneously and be organized like this, and have the right slogan,” argued Badalian. “This was mere PR that served its purpose -- it harmed Taron Margarian.”

Safarian, the opposition Heritage party politician, sees hope for lasting change in the country’s political culture in the not-so-distant future. “Even if we don’t say that a civil society has been formed in Armenia, we can definitely state that society has become smarter” about how it goes about securing change, he said.