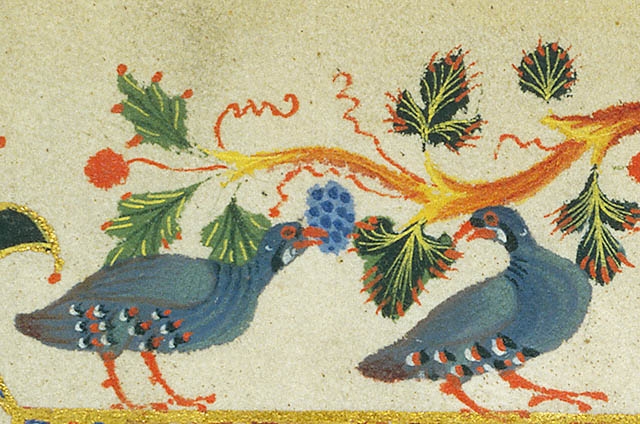 A page of the canon tables from the Zeyt'un Gospels from 1256. (Photo: J. Paul Getty Museum)

A lawsuit filed by the Western Prelacy of the Armenian Apostolic Church of America against the J. Paul Getty Museum in Los Angeles over a medieval manuscript has revived long-standing concerns within Armenia about the need to preserve the country’s cultural heritage.

The Church’s Western Prelacy, which oversees Armenian Apostolic communities in California and the western United States, filed the lawsuit on June 1 to demand that the Museum hand over seven illustrated pages from a 13th century Armenian manuscript of the Gospel. The two sides have until October 21 to discuss the case, according to a lawyer for the Western Prelacy.

The Prelacy claims that the pages, known as the Canon Tables, were taken from the manuscript, kept in an Armenian church in Zeytun, in eastern Turkey, some time during Ottoman Turkey’s 1915 massacre of ethnic Armenians in the area. Hundreds of ethnic Armenian historical monuments in Turkey became ruins or simply disappeared in the decades that followed, according to UNESCO.

“This is about our people reclaiming their rights; what appeared in the hands of outsiders, under unclear circumstances, should be returned to the Armenian people, even years later,” asserted Western Prelacy spokesperson Levon Kirakosian. “They must return what belonged to the Armenians.”

The Getty Museum has stated that it acquired the seven illustrated pages in 1994 from a private collector whom it has declined to name. The pages are the signed work of 13th century manuscript illuminator Toros Roslin (1256 - 1268); the Museum describes the pages as “the earliest known work of Toros Roslin, the greatest master of medieval Armenian book illumination.”

The chief curator of Yerevan’s Matenadaran manuscript archive, which holds the rest of the Zeytun Gospel as well as thousands of other ancient manuscripts, says that Matenadaran employees first noticed that pages were missing from the 409-page Gospel when the manuscript came into its possession in the 1980s.

“It seems that it was a person who didn’t understand the value of the Gospel and tore out the pages that had colorful paintings; a person who tore out what was too visible,” Chief Curator Gevorg Ter-Vardanian commented, in reference to the unknown individual who removed the pages.

According to legend, the manuscript, known as the “War Gospel,” would give strength to soldiers when held over an army, he added.

Ter-Vardanian declined to explain who had donated the Gospel to the Matenadaran. The Matenadaran learned in the 1990s that the missing pages were in the United States; by the mid-1990s, the institute had tracked the pages to the Getty Museum, he said.

In a statement published in The Glendale Press, Museum spokesperson Julie Jaskol termed the lawsuit over the Roslin illustrations “groundless” and called for its dismissal. “At no time in the 90 or so years that the Canon Tables have been in the United States has anyone questioned their ownership,” Jaskol said.

Vartkes Yeghiaian, the chief counsel for the Western Prelacy in the lawsuit, told EurasiaNet.org that the Prelacy has been negotiating with the Getty Museum about the illustrated pages for more than two years. Based on their original location in an Armenian church, the pages are considered to fall under the purview of the Armenian Apostolic Church.

“The negotiations have been without any result so far,” said Yeghiaian, who has also represented ethnic Armenian victims of the Ottoman Turkey slaughter in a suit against French insurance company AXA that resulted in a $11.5 million compensation payment this year.

The Western Prelacy demands that the Getty Museum pay $35 million in compensation -- $5 million for each of the seven illustrated pages -- if it does not release the Roslin pages to the Church. If the Western Prelacy can prove that the pages were stolen, there would be grounds under US law for the Church to request three times the compensation, or $105 million, Yeghiaian said.

“And we have that proof, otherwise we would not take this case to court,” he added, without elaboration.

Reasons for why it took over ten years to file a lawsuit to reclaim the missing pages remain unclear. But from the Church’s viewpoint, the case revolves around the need to preserve Armenia’s historical identity and culture. “The time has come for the Armenian nation to demand the return of its historical-cultural heritage, lost during the Genocide,” said the Western Prelacy’s Kirakosian.

One Turkish affairs scholar believes that the lawsuit might also promote Armenia’s argument that the 1915 slaughter of thousands of ethnic Armenians in Ottoman Turkey constituted an act of genocide.

“The media is already broadly covering this case, and later it will receive even wider publicity,” said Ruben Safrastyan, director of the Institute of Oriental Studies at the National Academy of Sciences of Armenia. The Ministry of Foreign Affairs has not commented on the lawsuit.

For the Matenadaran, famed worldwide for its collection of ancient manuscripts, the matter comes down to a question of being able to safeguard a valuable written record of Armenia’s culture. “Toros Roslin’s manuscripts are very special to us; they are unique . . . ,” Ter-Vardanian commented. “We have 409 pages of the [Zeytun] Gospel. Let’s hope the rest will also be returned [to us].”