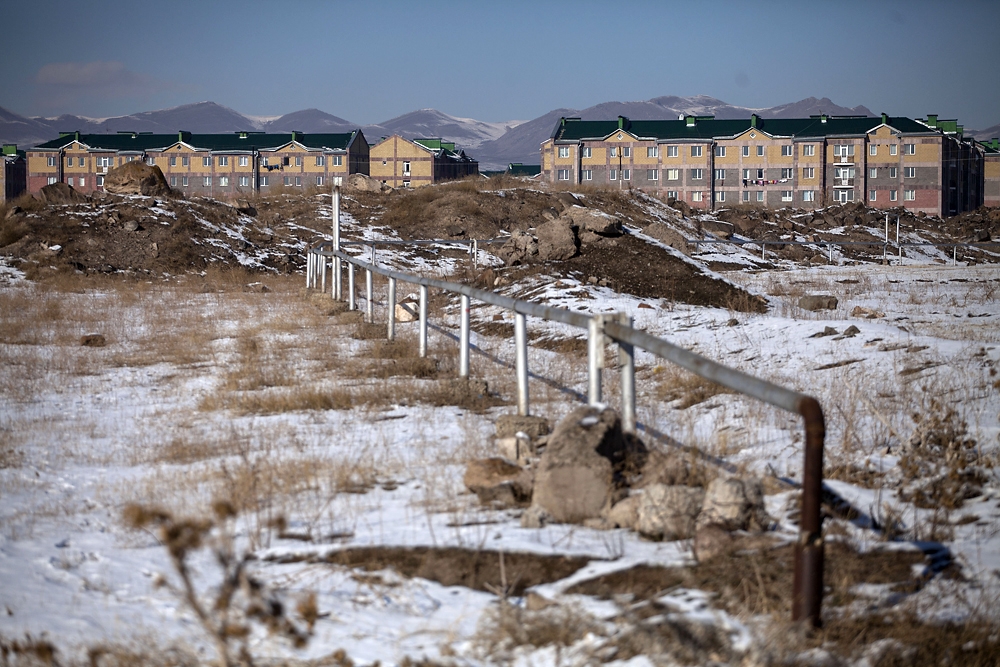 Pipes deliver natural gas across a snowy field in December 2013 to a new housing development in Gyumri, Armenia. With winter temperatures falling to -20 Celsius, people are feeling the pinch as natural gas and utility prices rise quickly. (Photo: Anahit Hayrapetyan)

Armenia is experiencing a Russian-style winter this year, and despite Yerevan’s plans to join the Moscow-led Customs Union, consumers are not catching a break when it comes to the cost of Russian gas. Instead, the price of Russian gas imports has risen 18 percent over last year, a development that is stoking public anger with the government’s decision to cast its economic lot with the Kremlin.

With temperatures dropping as low as -20 Celsius (-4 Fahrenheit), many Armenians have been hit with whopping gas bills that are wreaking havoc with their monthly budgets. Based on interviews by EurasiaNet.org with representatives of 30 separate families paying their gas bills at Yerevan post offices, the average December gas bill for a family of four stood at between 50,000-60,000 drams ($123-$148) – roughly an increase of over 40 percent from last year. Officially, an average monthly income stands at 150,960 drams per month, or $370.

“I kept potatoes in my kitchen, and I used to grow flowers there; they all are frozen now, and I must give my entire pension [25,000 drams or $61] to pay for the small amount of gas I’ve used,” said one elderly woman, wallet in hand, waiting to pay her gas bill in a Yerevan post office.

Back in early December, before the cold spell set in, supporters of President Serzh Sargsyan’s administration painted a different scenario – one in which Yerevan’s September decision to join the Customs Union would ensure that citizens reaped significant economic benefits. Russian President Vladimir Putin, during a December visit to Armenia, reinforced that impression with a pledge that Armenians would be paying Russian “domestic prices” for gas. Gazprom CEO Alexei Miller made a similar promise. But no Russian official ever provided details, and the gas price never decreased, instead it has gone up.

Many customers cannot believe their eyes when they see their gas bills, said one Yerevan post-office employee, who asked not to be named. “They repeatedly ask whether the final sum is correct,” she said. “Some get mad and start cursing the authorities. Others leave in silence, without paying, and ask for installment-plan options.”

As popular anger grows over high gas bills, representatives of the governing Republican Party of Armenia have remained largely silent. Some have simply advised citizens to skimp. “Everybody should think about being economical, despite their income level,” said MP Manvel Badeian, who claims he himself received a 300,000-dram (over $740) gas bill for December.

“What economy are they talking about? Are they mocking us? With the temperature 20 degrees below zero, and three small kids at home, is it normal to pay 60,000 drams [$148] for a single gas heater?” asked 39-year-old Marat Martirosian, a construction worker in Yerevan. “Should we turn off the heater and let our children freeze?”

One middle-aged Yerevan taxi driver, who declined to give his name, agreed. “They said gas will become cheaper when we join the Customs Union, and people will live better, but if they go on like this, nobody will stay in this country,” he said. “They gave everything to the Russians. Why don’t they respond to the people now?”

The Republican Party’s parliamentary faction head, Galust Sahakian, brushed off public complaints, and also emphasized the need to economize. People would be even angrier if there were no gas at all, he told the news site Yerkir.am on January 14. “People now are in such a situation that they try to find someone to blame, and they are blaming the government for this,” Sahakian said.

For their part, opposition leaders appear more focused on the government’s controversial pension-reform plan. Arman Musinian, spokesperson for the Armenian National Congress, the country’s largest opposition coalition, said that “discussions about our steps are being held at the moment.” The coalition views “all issues as part of an integral whole,” he said.

Political analyst Manvel Sarkisian, director of the Armenian Center for National and International Studies, believes the potential exists for public anger over gas prices to boil over. “If a powerful grassroots movement were launched, perhaps opposition parties would unite in light of current developments,” he said. “There is a chance for that at the moment.”