On the 11th anniversary of the worst political violence in Armenia’s independent history, many expressed hope that the new government would bring justice to the perpetrators. 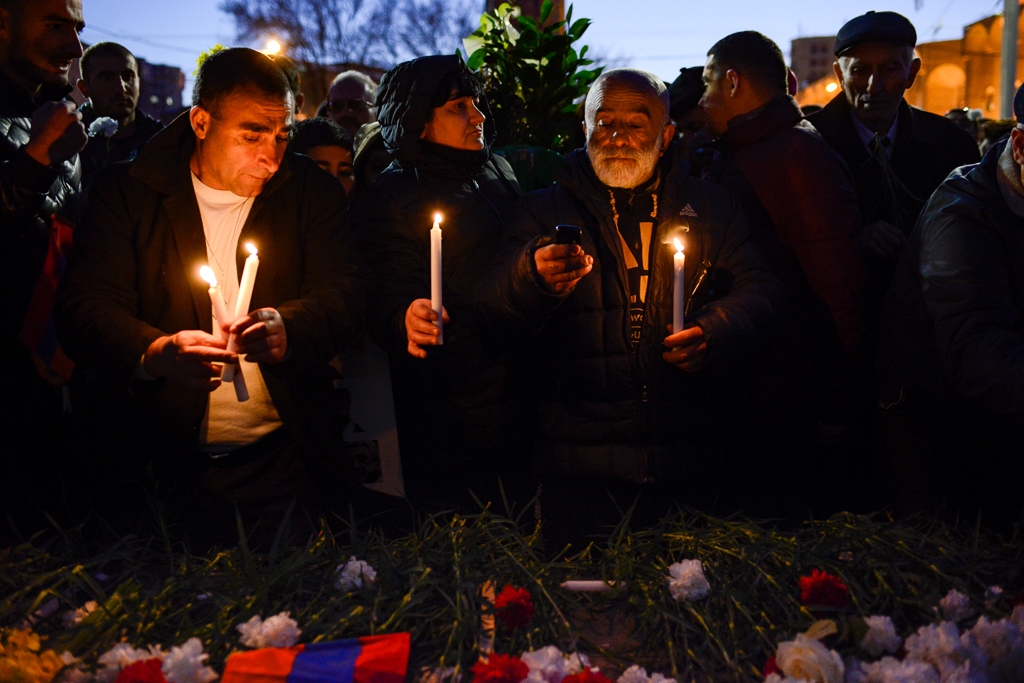 All photos by Vaghinak Ghazaryan/4Plus

Thousands gathered in Yerevan today to mark the anniversary of the violent breakup of political protests in 2008. March 1 is infamous as one of the darkest days in Armenia’s recent history, and it has been at the center of the new government’s efforts to address the crimes of its predecessors.

Participants in a march led by Prime Minister Nikol Pashinyan proceeded from Yerevan’s Liberty Square, where the 2008 protests took place and were first attacked by security forces, to Alexander Myasnikyan Square, where some of the worst violence occurred. Carrying candles, flowers, and posters commemorating the victims, some gathered in small groups to discuss the events and their aftermath.

“Now we feel a little justice is being served,” said 50-something Minas Gevorgyan. “We would always come here to commemorate, but until now many people were afraid to come. Nikol [Pashinyan] was here, too, back then. So he will deliver justice.” 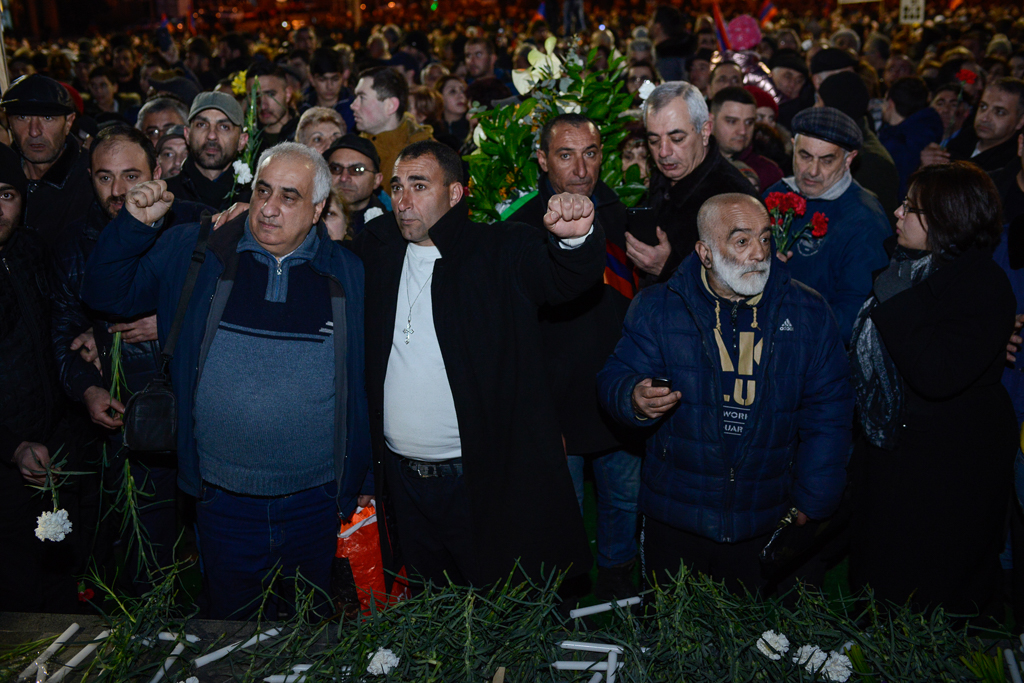 While Gevorgyan was talking, another man about the same age, Khachik Gasparyan, jumped into the conversation. “Today we see people coming here and bringing flowers but they are the ones who used to criticize us,” he said. “There should be no mercy for them. Nikol should throw them all out.”

This was the first time the Armenian government held a formal event marking March 1, and many Armenians were grateful that the state was finally beginning to take account of what happened 11 years ago.

"Tomorrow, March 1, the streets of Yerevan should thunder from the voices of the proud citizens of Armenia,” wrote one Facebook user, Artak Harutunyan, in a post the day before the event. “Tomorrow we have to show that we do not submit to the lies spread by the former authorities […] tomorrow we should be demanding that the crimes of March 1 be laid open.”

Pashinyan’s political career is closely tied to the March 1 events; he first rose to fame in Armenia for helping to organize the demonstrations, which protested against the fraudulent elections that brought Serzh Sargsyan to power. After nine days of peaceful protests, police and military officers broke up the demonstration and 10 people were killed in the violence. In the aftermath more than 100 opposition activists, including Pashinyan, were arrested. Pashinyan spent nearly two years in prison on charges of “organizing mass disorders.”

As prime minister, Pashinyan has placed a priority on delivering justice for the victims of March 1. Under his watch, prosecutors have built cases against several senior officials including former president Robert Kocharyan (who is currently in jail awaiting trial on charges of “violating the constitutional order”), former defense minister Seyran Ohanyan, former secretary of the National Security Council Armen Gevorgyan, and the chief of the Yerevan military garrison during the violence, Yuri Khachaturov.

In addition to organizing the march, legislators from Pashinyan’s “My Step” coalition in parliament have drafted a law that would provide compensation for victims. The minister of science and education has said that school textbooks need to be reexamined, particularly in light of “distortions” in the way March 1 has been portrayed.

Before the rally, Pashinyan made a televised speech in which he apologized “on behalf of the state” for the killings 11 years earlier. “The chapter of solving issues through violence is closed in Armenia,” he said. “Our joint mission is to make Armenia a country of rights and justice, truth and values, and we will not deviate from this mission.”

Given his personal connection to the history, Pashinyan came in for some criticism from Armenians who suggested he was politicizing the event. 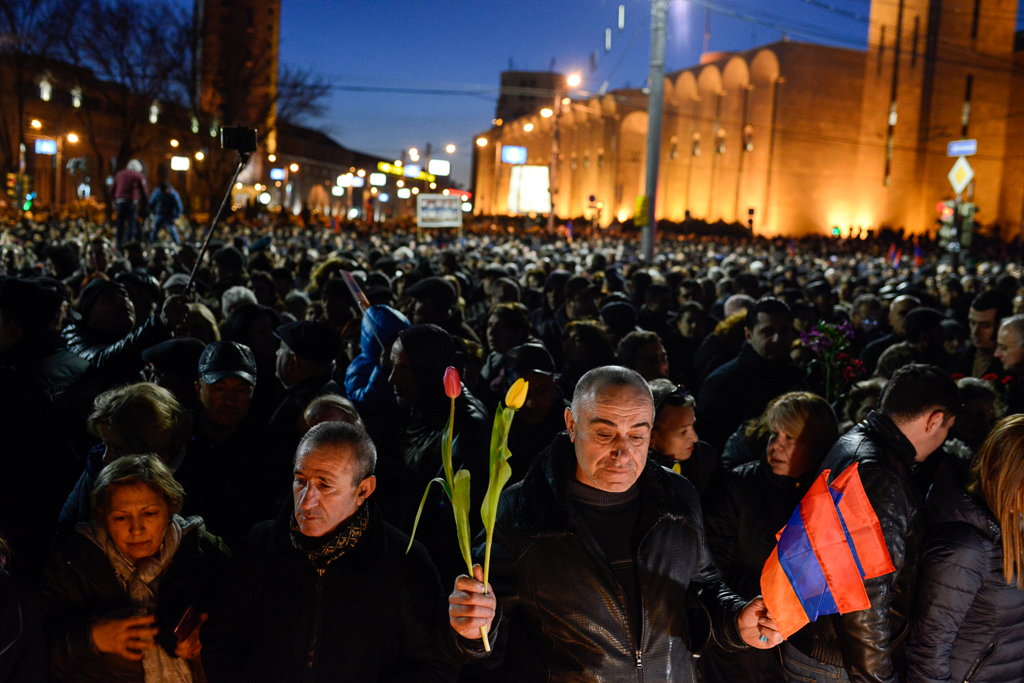 “I personally don’t think there is such a need to turn that day into a display of power or a show,” Gevorg Gorgisyan, a member of parliament for the Bright Armenia party, former allies of Pashinyan, told RFE/RL. “But the victims of March 1 should always be remembered, as long as the perpetrators remain unpunished,” he said. In the end, officials from both opposition parties in parliament took part in the march.

The march was of a piece with the new government’s reliance on symbolism in its politics, said Alexander Iskandaryan, the head of the Caucasus Institute, a Yerevan think tank.

“Pashinyan and the people who surround him are coming from discourses like social media, protests and so on and in this new situation when they have to be bureaucrats but are trying to remain ‘Charismatics,’ they need to prove their legitimacy through different symbols,” Iskandaryan told Eurasianet. “March 1 is a symbol.”

One of the participants in the march, Ani Margaryan, was only eight in 2008. She recalled her family not knowing what was happening because media was censored after the events. “I’m not here because the prime minister called us to march, I’m here because these events affected our lives,” she told Eurasianet. “After 2008 something changed and the deaths of these 10 people was the road to the freedom we have now. The difference is that this year we remember this day not as the day we lost but as the day we struggled and won.”