The hardest thing to change may be patriarchal stereotypes. 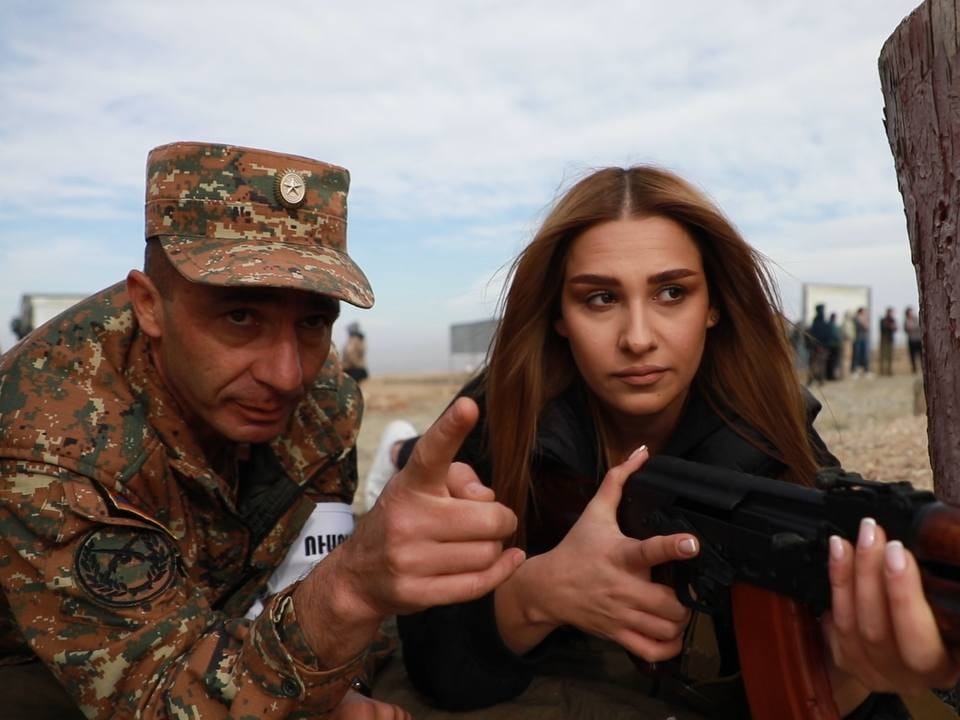 The Armenian Defense Ministry is drafting a bill that would substantially broaden the role of women in the country's armed forces.

It is part of a comprehensive overhaul of the military, which has been in a constant state of upheaval since the defeat to Azerbaijan in the 2020 Second Karabakh War.

While recruiting more women would have the obvious benefit of growing the ranks of the army amid Armenia's precarious security situation, some experts point to the difficulty of trying to ensure gender equality in such a patriarchal environment.

The initiative was announced by Deputy Defence Minister Arman Sargsyan on January 11.

"The reason for this idea was the activity of women in matters related to defense and security. The Ministry of Defense organized shooting courses for women, and the results pleasantly surprised the leadership of the defense department. Taking into account these and other factors, it was decided to start discussing relevant legislative initiatives," Sargsyan told reporters, emphasizing that women's service would be voluntary.

Military service in Armenia is compulsory for male citizens of the republic aged 18 to 27 for a period of two years.

At present women serve in the Armenian military only on a contract basis. They accounted for 9.1 percent of contract service members in 2019, the most recent figure to be provided by the Defense Ministry.

Following Armenia's defeat in 2020, the country embarked on a comprehensive military reform program.

Presenting his five-year government plan for 2021-26 Prime Minister Nikol Pashinyan called for more women's involvement in combat units, emphasizing that the initiative "has no ideological or anti-ideological basis, but is conditioned exclusively by pragmatic calculation. […] Women make up the majority of the Armenian population. The aim is to make the most of this potential."

But nearly two years later no general concept for army reform has been adopted and little progress has been made, though in March 2022 the Defense Ministry announced that a women's rifle company had been established.

The lack of progress can be attributed in part to the regular shakeups at the top of Armenia's defense establishment in the aftermath of the war. Since then, both the minister of defense and chief of the General Staff have been replaced three times. The most dramatic moment was in February 2021, when the top army brass, led by the then-Chief of the General Staff Onik Gasapryan, joined the opposition's demand for Pashinyan's resignation. This conflict was resolved by the dismissal of Gasparyan. Pashinyan then resigned and called a snap election, which his party won.

Steps were taken to rebuild the army on the Russian model, though enthusiasm for this has waned given the Russian military's poor performance in Ukraine and Russia's rejection of requests to help its military ally Armenia amid incursions by Azerbaijan in fall 2022.

Other components of the reform include boosting the reserve force, and loosening gun ownership restrictions for civilians.

The process of transforming the army has been inhibited by periodic clashes on the border with Azerbaijan. The bloodiest took place on September 13-15 last year and claimed the lives of over 300 soldiers on both sides.

Problems also arose in the process of re-equipping the army.

Prime Minister Pashinyan publicly complained about Armenia's failure to receive armaments from allies even after they were paid for. He did not name a specific state, though it was clear he was speaking about Russia, which is the largest supplier of weapons to the Armenian army. According to a report by the Stockholm International Peace Research Institute (SIPRI), 94 percent of the weapons acquired by Armenia from 2015 to 2019 were produced in Russia.

Armine Margaryan, a military expert and former staffer of the Security Council of Armenia, co-authored a study published last June on military reform.

She told Eurasianet that the "tradition" of gender discrimination makes life difficult for women in the military.

"It creates favorable conditions for undermining the professional military abilities of women, and therefore hinders their professional growth. For example, women may be assigned a job that is 'traditionally' perceived as 'women's work'. The problem here is not at all the limited or undiscovered abilities of women, but the prejudices of the vast majority of male bosses regarding these abilities," she said, adding that such an approach negatively affects the level of combat capability of female soldiers and breeds disillusionment.

One female officer who left the army in 2021 after 10 years of service agrees on the importance of changing patriarchal and discriminatory approaches to women serving in the army. "When I served in the army, I faced such an attitude. Women commanders need to make two or three times more effort so that the men subordinate to her take her seriously, obey her, and follow her commands. This problem really exists," the former officer, who asked not to be named, said in an interview with Eurasianet.

According to Margaryan, ending such discrimination should be a central priority of the military reform.

"The reform agenda should be aimed at changing attitudes and stereotypes regarding the service of women in the armed forces, providing the necessary conditions for the effective involvement of women in the military service, encouraging the participation of women in decision-making at all levels, as well as the effective implementation of social guarantees," she said.

She proposed that one way to subvert the patriarchal mentality would be the formation of all-female units.

There is precedent for this. According to data provided by the Armenian Ministry of Defense, in 2017, a women's platoon was created for involvement in NATO peacekeeping missions in Kosovo and Afghanistan. A similar all-female Armenian unit served in the UN peacekeeping mission in Lebanon.

And in September 2020, Anna Hakobyan, a journalist and the wife of Prime Minister Pashinyan unveiled a program that envisaged women aged 18-27 taking a 45-day basic military training course, after which successful participants would be able to join the regular armed forces.

Hakobyan appeared in public several times in military fatigues and even formed a women's military detachment to participate in the Second Karabakh War, which began just a week after she introduced her initiative.

But after Armenia's defeat the idea was scrapped and Hakobyan distanced herself from the cause.