Armenia: Controversial Communist to Get Statue in Yerevan? 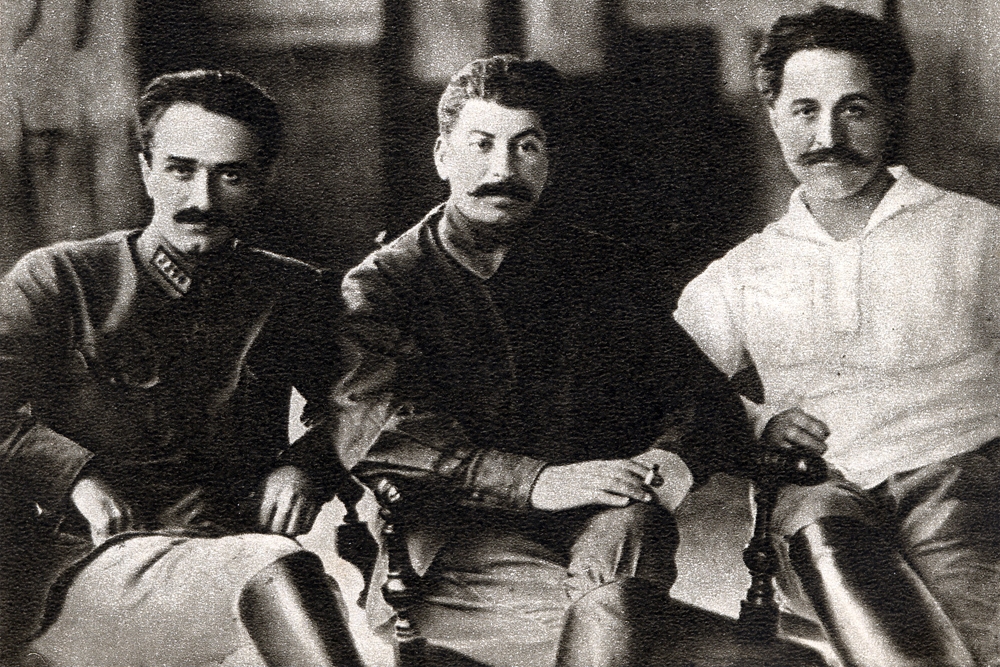 Mikoyan, Stalin and Ordzhonikidze made up the “Caucasian Clique.” (Photo: Public Domain)

As Armenia prepares to join the Russia-led Customs Union, a surprise decision to erect a statue in the capital Yerevan in honor of the Soviet-era political leader Anastas Mikoian is raising hackles among intellectuals and rights activists.

For many, Armenia-born Mikoian (1895-1978) defines the concept of a political chameleon. He was an Old Bolshevik survivor who served “from Ilyich until Ilyich” – from Vladimir Lenin until Leonid Brezhnev. He lasted so long, as the Kremlin-controlled broadcaster RT put it, by learning to walk through a rainstorm on Red Square and come out dry. Renowned for his love of ice cream, he is credited as the father of the Soviet Union’s processed-food industry. At the very end of his political career, he attained the post of chairman of the presidium of the USSR Supreme Soviet, making him the titular head of state for a brief period during the mid-1960s.

But within Armenia, he is also reviled for his participation in the bloodletting of the 1930s; in particular, for a 1937 letter to dictator Joseph Stalin in which he recommends the execution of an additional 700 “anti-Soviet” Armenians. Many complain also that he supported Nagorno-Karabakh remaining part of Azerbaijan and disparaged concerns about Ottoman Turkey’s 1915 massacre of ethnic Armenians.

Yerevan Mayor Taron Margarian, who on April 30 approved a City Council decision to honor Mikoian, asserted the controversy about his past should be “left to historians.” The city claims its decision was based on Mikoian's “contributions, career and revolutionary work.”

Civil-society activists, opposition politicians and cultural figures have trouble accepting the mayor’s reasoning. “Even in my worst nightmare, I could not imagine that there would be a proposal to erect such a statue in independent Armenia,” said human-rights advocate Avetik Ishkhanian, head of the Helsinki Committee of Armenia. Ishkhanian has already pledged that he would be willing to take part in any future attempt to demolish the statue, calling its existence “insulting to any decent Armenian.”

As of May 22, some 450 Armenians had signed an online petition calling on the city government to scuttle the Mikoian statue. “We believe the activities of Anastas Mikoian and other such politicians have to be subject to scientific research and public hearings; not to being made heroic,” the petition reads.

The monument, a copy of the 1.70-meter-high bronze statue that adorns Mikoian’s grave in Moscow’s Novodevichye Cemetery, will stand on Kochar Street in downtown Yerevan. No competition was announced for designers. The work already is underway at an unidentified Yerevan foundry, according to local media.

Filmmaker Tigran Khzmalian, one of the signatories of the petition, drily commented that, given Mikoian’s undisputed success with developing canned and frozen foods, it would make greater sense to put the statue in front of a large food-processing plant.

A statue to Mikoian in a place of prominence “is just another link in the chain that binds us to [Moscow’s] empire,” Khzmalian said.

Political analyst Ruben Mehrabian from Yerevan’s non-profit Center for Political and International Studies agreed. “By reviving this Soviet-era figure, our authorities are trying to please Russia,” he charged.

Moscow has not publicly expressed an opinion about the statue plans. Russian President Vladimir Putin, however, recently has encouraged a revival of nostalgia in Russia for the Soviet Union.

Hovhannes Sakakian, head of the parliamentary Committee on Legal Affairs and a senior member of the ruling Republican Party of Armenia, dismissed as “absurd” claims that Yerevan wants to use a Mikoian statue to curry favor with Moscow. “We have been strategic partners with Russia for ages,” Sakakian said, adding that “statues are erected for other principles” than the need to kowtow to a foreign power.

Criticism does not come solely from within Armenia. Poland also has objections. Archival documents show that Mikoian was among those who signed off on the Soviet Union’s 1940 execution of 22,000 Polish army officers in Katyn during World War II, underlined Polish Ambassador Zdzisław Raczyński in a May 5 interview with The Armenian Times. Expressing support for Armenian critics of the statue, he termed the plans to honor Mikoian incomprehensible.

So far, there is no sign the city government is having second thoughts. A spokesperson for Mayor Markarian told RFE/RL that the final decision, which has passed to the central government, “is now beyond our jurisdiction.” Central-government officials have not commented.

Analyst Mehrabian believes authorities, already struggling to contain dissatisfaction with its Customs Union plans, eventually will “backtrack on their [statue] decision.” In any case, he predicts, the struggle against the metal Mikoian will continue. “Otherwise, the statue will have one place where it can be – [suburban Yerevan’s] Sovetashen garbage dump,” he said.