The two men pleaded guilty to being mercenaries but rejected charges they were “terrorists.” 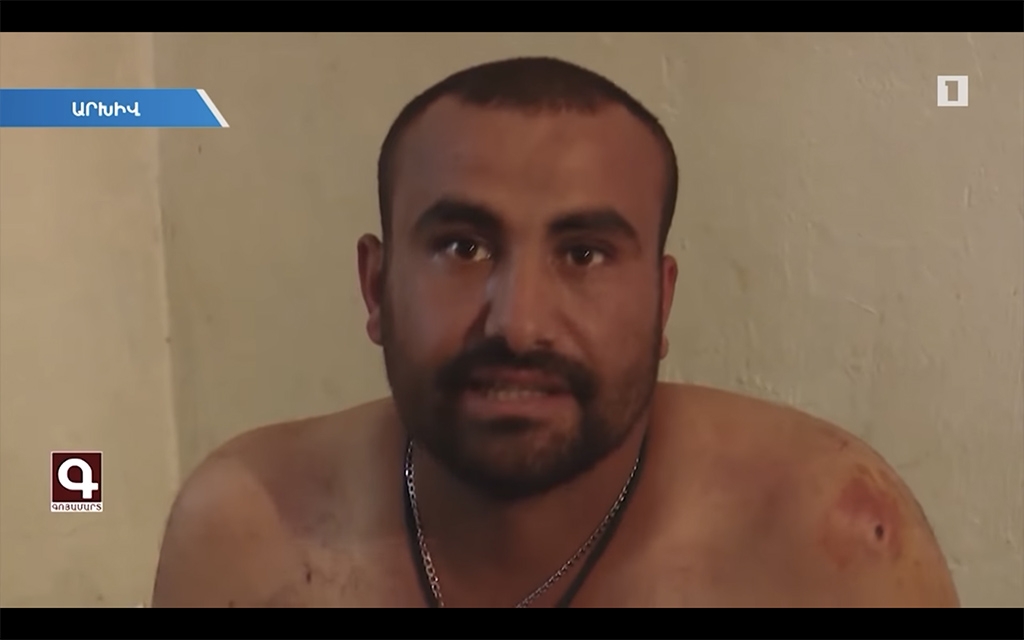 Yusef al-Haji, a Syrian convicted in an Armenian court for charges stemming from his fighting for Azerbaijan in last year's war. (screenshot, public television)

Two Syrians have been convicted in Armenia for fighting as mercenaries on Azerbaijan’s side during last year’s war.

In a closed trial that took only a single day, the Court of General Jurisdiction of Kapan in southern Armenia convicted the two men, identified as Muhrab al-Shkheri and Yusef al-Haji, on several charges including terrorism, international terrorism, serious violations of international humanitarian law during armed conflicts, and working as mercenaries. They were given life sentences.

The two had a public defender, Mushegh Vardanyan, who told local media that his clients pleaded guilty only to the charges of being mercenaries. “The defendants only partially admit their guilt, only the mercenary charges, they do not accept the rest of the charges and the verdict will be appealed,” Vardanyan told aravot.am.

After the trial one witness, Armen Vaghunts, told reporters that the Syrians attacked his village, which was not named, but that Armenian forces managed to repel the attack. He said that half the 150-member detachment of Syrian mercenaries fled, seven were killed and two others, al-Shkheri and al-Haji, wounded. "First they shouted Allahu Akbar, their clothes were different, and they spoke Arabic,” Vaghunts said. “We left them alive to prove to the world that Syrian mercenaries are fighting against us.”

In spite of widespread evidence gathered by international media and researchers that Turkey recruited hundreds of mercenaries from Syria and transported them to Azerbaijan to fight, both Azerbaijani and Turkish officials continue to deny it. Figures vary on the numbers of mercenaries involved in the conflict, but a report in April from the NGO Syrians for Truth and Justice (STJ) said 2,580 were recruited and 293 died.

Both Syrians testified that they had been recruited by a man they called Abu Amsha. That refers to Mohamed al-Jasem, a senior member of a militia group known as the First Legion of the Syrian National Army-Suleiman Shah Brigade, an Istanbul-based Syrian researcher who asked not to be identified told Eurasianet. The group earlier fought for Turkey in its 2018 offensive in Afrin, Syria, and the group gained a reputation for crimes including torture and rape, the researcher said. “Then, they were later sent to Libya and Azerbaijan."

The Armenian court also identified 30 other people of interest and put them on a wanted list, from groups including the Sultan Suleiman Shah, Suqur, Al-Hamza, and Sultan Murad brigades. The researcher said that there were two other groups, Al-Moutasem Brigade and Levent Front, which also sent fighters to Azerbaijan.

While the Armenian court charged al-Shkheri and al-Haji with “terrorism,” the militia they were in was not an Islamist one, the researcher said. “These groups can't be called terrorists like ISIS because the violations they commit come from being corrupt militias not from a jihadi dogmatic belief,” the researcher said. “They didn't go to Azerbaijan to fight against ‘infidel Christians’ but simply for money. Jihadis would never fight outside their country, especially for a Shia-majority country like Azerbaijan.”

A report from Syrians for Justice and Truth (SJT) did claim that about 150 fighters from Syrian jihadi groups made up of people from the Caucasus were sent to Azerbaijan in July, the same month that serious clashes broke out between Armenia and Azerbaijan. That fighting proved to be a prelude for the bigger war that began in September. “They [the Caucasian jihadist fighters] were taken to Azerbaijan by Turkish military aircraft in three flights on 5, 18 and 23 July 2020,” the report says.

“Most probably they [the Caucasian jihadist fighters] did take part in the Nagorno-Karabakh war but we don’t have information regarding their participation,” SJT’s co-founder and executive director, Bassam Alahmad, told Eurasianet.

As in Armenia, the term “terrorist” is used loosely in Azerbaijan. And the day after the trial of al-Shkheri and al-Haji took place in Armenia, Azerbaijan’s general prosecutor’s office announced that it was charging a Lebanese-Armenian man with being a “terrorist” and “mercenary.” The man, Vicken Euljekjian, was captured following the ceasefire announcement while trying to return to Shusha, where he had recently moved with his fiancée. His fiancée, Maral Najarian, also was captured and became a cause célèbre. Azerbaijan released and repatriated her to Lebanon in March.

The Azerbaijani prosecutors say that Euljekjian was paid $2,500 to fight as a mercenary on the Armenian side.

The Syrian authorities have been silent about the mercenaries’ convictions. They are “sweeping the issue under the rug,” Alahmad said. The trial and conviction also were ignored by official Baku and the Azerbaijani media.