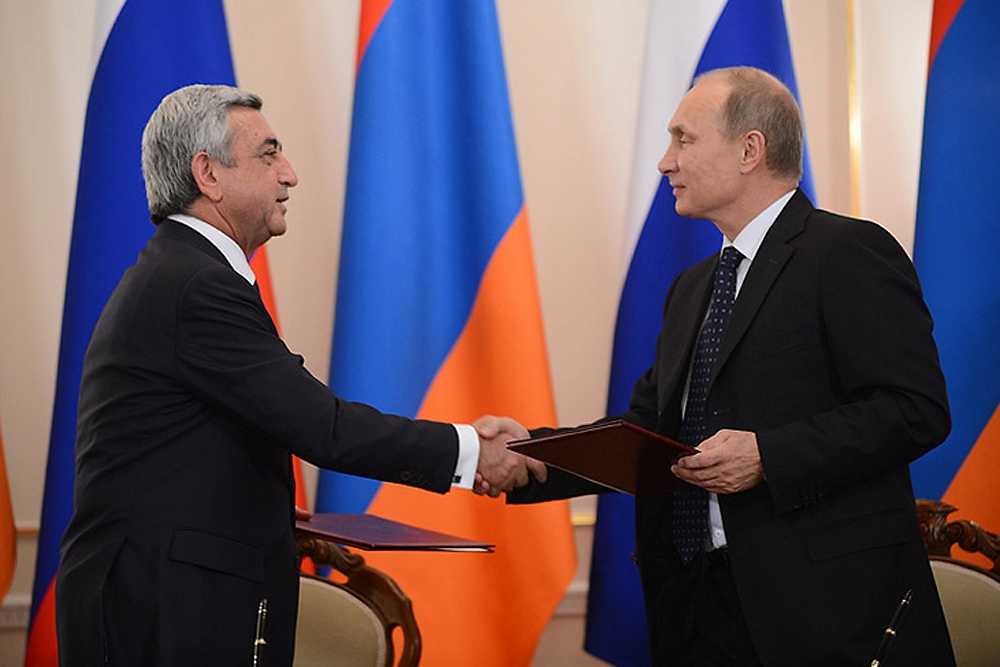 President Serzh Sargsyan’s early September announcement that Armenia is ready to join the Moscow-led Customs Union is stirring uneasiness in Yerevan. Some analysts contend the move would do more to bolster the incumbent government’s authority than benefit the country as a whole.

“I confirmed Armenia’s decision to join the Customs Union and participate in the processes of formation of the Eurasian economic union,” Sargsyan said in his September 3 statement, relating to his Moscow visit. “It’s a rational decision and it is in the interests of Armenia.

That statement generated an immediate backlash at home: several hundred people gathered outside the presidential residence on September 4 to protest the possibility, chanting slogans including “No return to the Soviet Union,” and “Russia, Go Away.”

“Did Serzh Sargsyan ask my opinion [on this]? Did he ask whether I or other people agree to this, did he ask about the decision of the Armenian citizens?” one protester told EurasiaNet.org. “Such issues must be settled through a referendum and debates; the decision should not be taken unilaterally.”

A close Sargsyan ally, on the other hand, disputed the notion that such a weighty issue as Customs Union membership -- an action that would greatly complicate Armenia’s ability to foster closer relations with the European Union, and thus likely cement Armenia’s geopolitical orientation toward Russia -- required public debate.

“Serzh Sargsyan did not need to ask anybody about this issue,” Galust Sahakian, the deputy chair of the parliamentary faction of the governing Republican Party of Armenia.
Some observers in Yerevan believe that Moscow coerced Sargsyan into making a commitment to the Customs Union. “Serzh Sargsyan’s West-oriented policy made Russia nervous; the Russians pressed and blackmailed him, forcing to make an opposite decision,” independent political analyst Yervand Bozoian told EurasiaNet.org.

The Armenian president has repeatedly denied doing the Kremlin’s bidding. At a news conference back in March, for example, Sargsyan declared: “Do not believe those who claim that the Russians are imposing membership in the Customs Union on us. This is not true. How many times should I repeat this?”

Sargsyan in his September 3 statement insisted that Customs Union membership would not necessarily “preclude our dialogue with the European structures.” He also claimed that his administration was “determined” to press ahead with economic reforms.

EU representatives wasted little time in bursting Sargsyan’s bubble world, stating bluntly that Customs Union membership and close cooperation with the EU were generally incompatible. In an interview with the RFE/RL Armenian Service on September 6, Peter Stano, the spokesperson for Stefan Fuele, the European Union Commissioner for Enlargement and European Neighborhood Policy, stated that the EU would not initial either an Association Agreement or an Agreement on Deep and Comprehensive Free Trade Area with Armenia, if Yerevan’s Customs Union plans proceeded.

Various political analysts, meanwhile, have cast doubts on Sargsyan’s reform dedication. Richard Giragosian, a political scientist and director of the Regional Studies Center in Yerevan, described Sargsyan’s Customs Union policy as perhaps the gravest geopolitical error in Armenia’s post-Soviet history, and, if implemented, one that would have lasting consequences for Armenia.

“This recent decision demonstrated that Armenia has made a strategic blunder and has lost another opportunity,” Richard Giragosian told EurasiaNet.org. “This poses a very serious threat to our future. This is not only a loss for Europe; this is a far greater loss for Armenia. The price required for this wrong decision will be paid by the population, and it only strengthens the oligarchic system in the country.”

Giragosian also predicted that Customs Union membership would cause a massive drop in public confidence in the government’s ability to foster a better life for the majority of Armenians at home, and thus spur a new and vast wave of emigration.

Raffi Hovannisian, the leader of the opposition Heritage Party, and the man who led a fleetingly successful protest movement  following his disputed defeat in the presidential election earlier this year, asserted that Sargsyan was putting personal political considerations ahead of the country’s best interests.

“Serzh Sargsyan who assumed the status of a self-willed governor should resign. All possible resources of patience and a worthy life for the country and its people are exhausted,” Hovannisian said. “Sargsyan should resign for the sake of Armenia and our future, our independence, justice and national security.”

Though concern about Armenia’s prospects in the Kremlin’s economic embrace is fueling worries in many political circles, Sargyan does have an ample cohort of defenders. Political analyst Alexander Margarov, for one, suggested that fears that Armenia would be cut off from the EU were overblown. He added that a major factor that persuaded Sargsyan to opt for the Customs Union was a Russian guarantee to ensure the security of Nagorno Karabakh.