Armenia: Daring to Be Cool While Cycling 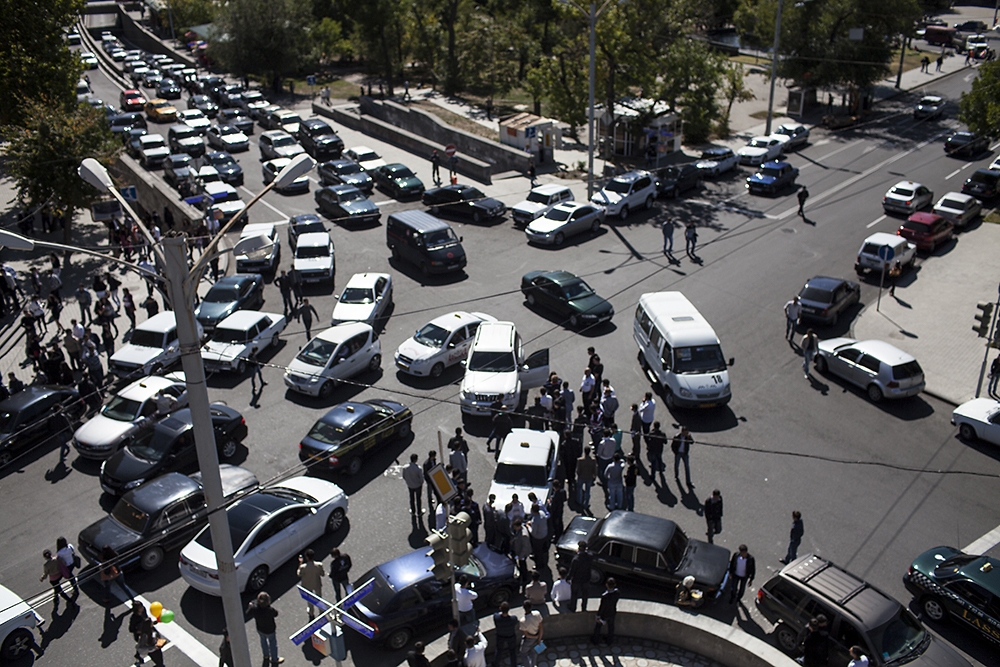 For many Armenians, the sight of a grownup riding a bicycle in public used to be cause for laughter and stares. As elsewhere in the South Caucasus, the essence of hipster transportation came via a high-powered engine, not via two wheels on pedal-power. But now, that perspective has begun to change. Slowly but surely, bicycles – at least in the capital, Yerevan – are becoming the new cool.

Armenia’s imports of bikes, primarily from the European Union, China, Taiwan and Turkey, grew by an unprecedented 61 percent during the first quarter of 2013, compared to the same period last year, according to official data. At 14,700 bicycles, that number remains modest compared with Yerevan’s population of 1.22 million. But local bikers say they already sense that city residents view their vehicles differently.

“When police officers see bikers, they don’t pick up loudspeakers to ask them not tо ‘disrupt traffic,’ like they used to do before,” commented Vahagn Vadumian, a 36-year-old yoga instructor who, four years ago, started using a bike as an eco-friendly alternative to public transportation. ”The number of bikers has increased by at least 10 times recently.”

“If before, [drivers] used to beep or shout at bikers just because they saw them on the streets, now, many drivers simply beep at them in greeting,” said Hovhannisian.
Pinpointing what has brought about the change is not easy. Rather than the government, Soviet-style, attempting to impose a love of cycling from above, this time the enthusiasm appears to have started at a grassroots level.

Some bike stores attribute the heightened interest to the increased number of young Armenians who now travel, study or work abroad, particularly in western Europe, and bring back various new tastes, including for adult bicycle-riding.

“Our customers are young people who have traveled abroad, seen various things and changed their attitudes,” commented Ruben Markarian, a sales manager at a Yerevan bike store, Ideal Bikes-Armenia, which last year became one of the first Armenian companies to start importing bikes from Europe to meet demand. “Biking now personifies a new style, a new attitude that has begun to attract people, regardless of class and outlook.”

Increased interest in preserving the environment also, arguably, could play a role, but details are sketchy. While the police report that the number of registered vehicles in Armenia has increased by 66 percent since 2006 to over 500,000 vehicles, they claim that data for earlier years is a “state secret.”

Whatever the source, both the local government and private sector appear to want to cater to that demand and show the public that they, too, know what it means to be cool. The Yerevan city government is setting up more bicycle racks for cyclists and has opened one central bicycle route. Yerevan hotels now offer bikes for rent, while some cafes offer “green delivery” of food orders via bicycle.

Even the ultimate heroes of Armenian daily life – leading male characters in TV soap operas –are swinging their legs over bike seats. Usually adorned all in black and traveling in nothing less than a luxury sports car, such men now are shown inviting each other to do the healthy thing, go bike riding and “remember our childhood.”

“Biking becomes a fashion trend since people have stopped to think that it is a shame to ride a bike,” noted Tigran Korkotian, owner of a popular bike store, Dreamland Bike, who picked up his own taste for bicycles while living in cycling-friendly France.

In what she calls “a society with soap-opera style,” those price tags can command respect, said yoga instructor and cycling fan Vardumian. “When [people] learn that a bike costs half the price of their cars, they already start to think about it with respect.”

But not everyone. Sociologist Aharon Adibekian points out that, in general, Armenians outside of Yerevan still do not take bikes and scooters seriously. As a mode of transportation dependent on human power, they are seen as vehicles for those who can afford no better. Or a pasttime for children alone.

“Many people are still committed to the medieval idea that a serious person should have a big house and an expensive vehicle,” Adibekian commented.

Twenty-nine-year-old jeweler Davit Harutiunian, who lives on the outskirts of Yerevan, is one of them. “I've heard there are very expensive bikes. That’s ridiculous! A real Armenian man should drive a car, “ Harutiunian advised. “If I ride a bike, [people] will start laughing at me.”

Like other Armenian men, Harutiunian also objects strongly to the notion of a woman straddling a bicycle to travel independently around the city. “Girls shouldn’t even think about bikes,” he added.

Those who do, like 25-year-old journalist Lilit Arakelian, who lives in a Yerevan suburb, concede that the general public attitude toward women on bicycles, along with Yerevan’s lack of traffic rules and challenging terrain, played a role in foiling their attempts at public bike riding.

However, cyclist Vardumian maintains that, despite the problems, change is coming to Yerevan on two wheels.

Utlimately, he said, Armenians will “understand that, despite the stereotypes, a biker is not someone who lives beneath the poverty line.“ Rather, he said, it is “an individual who has chosen biking [himself or herself].”