The legislative efforts come after long struggles between the government and a hostile media, much of which is controlled by figures close to the former regime. 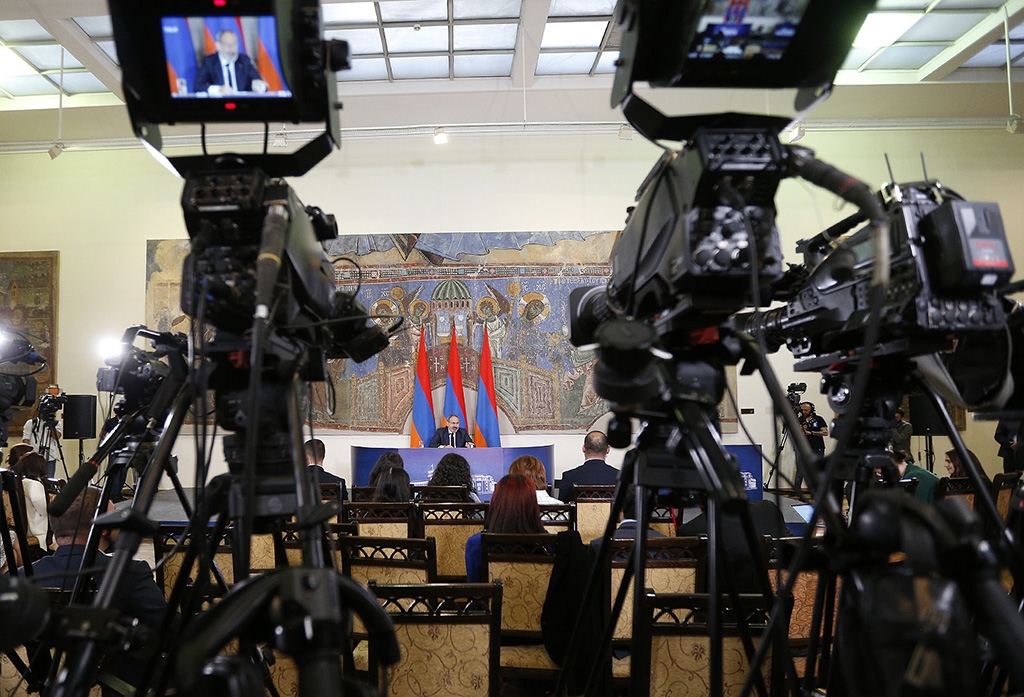 Prime Minister Nikol Pashinyan’s party is attempting to tackle Armenia’s rambunctious press, much of which is owned or controlled by political opponents (primeminister.am)

Armenia’s government is taking steps to rein in the country’s media, much of which has adopted an adversarial – and, to many, an irresponsible – approach to the post-“Velvet Revolution” authorities.

One member of parliament has introduced a law that would punish “spreading false information” by up to a two-year prison term. Another group of legislators is working on a proposal to expand a law prohibiting hate speech. Others have proposed the creation of a press regulation agency, either connected with the state or independent, to police media ethics.

The legislative measures are the government’s first systematic attempts to tackle the country’s rambunctious press, much of which is owned or controlled by figures loyal to the regime that the current government toppled in the spring of 2018. The measures also seek to regulate social media, where most of Armenia’s political discussions take place and where unknown actors with murky motives can spread harmful or false information. Actors on both sides of the political spectrum hurl vitriol that the recipients perceive as “hate speech.”

While fake news can take many forms – “Coffee Cures Cancer!” – the government proposals focus especially on its political manifestations.

Since the new government took over, “fake news” has become a political tool in the hands of former regime loyalists, argued Arman Babajanyan, an independent member of parliament. “Therefore, this problem requires legislative regulations, which of course will not completely eliminate the impact of fake news but will at least have a deterrent effect for those who use fake news as a political tool,” he wrote in a December 2 Facebook post. The next day, he introduced the draft fake news law.

Countries around the world are dealing with “fake news” and disinformation, but in Armenia it has been the cause of especially sharp conflicts. Last April, Prime Minister Nikol Pashinyan ordered the security services to crack down; the next day the National Security Service (NSS) announced it had arrested the administrator of a satirical Facebook page critical of the government. More recently, following the U.S. assassination of Iranian General Qasem Soleimani, the NSS arrested another Facebook user who falsely claimed that Pashinyan had congratulated U.S. President Donald Trump on a “successful operation.”

The NSS used varying legal bases, such as charges of “endangering national security,” in those arrests. The new law would make fake news itself illegal. It would punish those who spread fake news or who pay others to spread it. It would, however, give producers of fake news a chance to avoid punishment – three days to report to the authorities that they had violated the law.

The question, of course, is what constitutes “fake news.”

“Fake news should be defined not only by the fact that the information is false, but also that this disinformation is created and spread deliberately in order to manipulate public opinion and discourse,” said Sargis Khandanyan, a member of parliament from Pashinyan’s My Step coalition who has been leading the media regulation efforts, in an interview with Eurasianet.

But legal ambiguity is inevitable when addressing fake news, said Gegham Vardanyan, an analyst for the Yerevan-based Media Initiative Center. “I like that a discussion has started,” he told Eurasianet. “But what is fake news? Is a satire show also fake news?”

Vardanyan also noted that Babajanyan, who introduced the legislation, was recently in the media business himself, as the founder and, until last year, editor of the news site 1in.am. “A person who is proposing this regulation should be ready to exclude it [fake news] from his own website,” Vardanyan said. “I’m sure if we look at the website we will find news that could fit into his proposed category of fake news.”

The government, too, has been accused of engaging in fake news of a sort. Some pro-government social media accounts appear to be not connected to real people, said Ani Samsonyan, a member of parliament from the opposition Bright Armenia party, during a recent forum on hate speech and fake news organized by RFE/RL. “It’s organized […] there are fake accounts working for the prime minister,” she said. “If you follow their activity long enough you realize that it has to be coordinated from one point.”

The Justice Ministry introduced legislation last August that would punish hate speech by a prison term of up to three years. (Current legislation doesn’t treat hate speech as a crime in itself, but as an aggravating factor in other crimes.) That legislation was never enacted, however, and now a working group of parliamentarians is discussing a new approach. “I hope that we’ll come up with legislation by the end of spring,” Khandanyan said.

As models, “we are mostly looking at European countries, to successful examples such as Sweden, the UK, Germany, or France,” Khandanyan said. But the law won’t apply only to the press, he said: “Regulations on combating hate speech should be universal and not be limited to media platforms,” he said. “We need to distinguish between hate speech, slurs, insults, and so on, to understand which of these should be criminalized. And only then can we think of appropriate sanctions.”

While no specific proposal has been made, the opposition Prosperous Armenia Party (PAP) has already come out against the idea. “Hate speech is a serious threat, but I’m concerned that this initiative could threaten freedom of speech,” said Naira Zohrabyan, one PAP member, during a December discussion in parliament. “The main propagators of hate speech and fake news are fake [social media] users,” she said. (Last year, the investigative news website fip.am found that PAP used an “army” of fake social media users during the 2018 parliamentary election.)

In February, a PAP deputy well known for his homophobia, Gevorg Petrosyan, also spoke out against the proposed law. “This is a mechanism to contain political dissent, because what does hate speech mean? Yes, I hate homosexuality, I hate ignorance, I hate the betrayal of the homeland, I hate all these phenomena,” he said.

Amid the debate on government regulation of the media, some in the press are proposing that Armenian journalists need instead to police themselves.

Artak Hambardzumyan, a media expert who has been invited to take part in the parliament’s working group on media laws, has advocated the creation of a body modeled on the UK’s Independent Press Standards Organisation, but which would have the power to legally impose and enforce sanctions (participation in IPSO is strictly voluntary).

“We need a regulatory body that would be independent of the state and meanwhile has enough legislative power and resources to deal with the harms brought by social media,” Hambardzumyan told Eurasianet.

Parliament’s Khandanyan, himself a former journalist, said the idea of a self-regulating body is a “dream.” Armenia already has independent, voluntary press organizations but they have proved toothless in dealing with difficult issues in the media. “We need a strong and reputable media regulation body that will keep media outlets responsible for violating ethical norms of journalism,” he said.