Armenia Debates: Is the Grass Greener in Pro-EU Georgia? 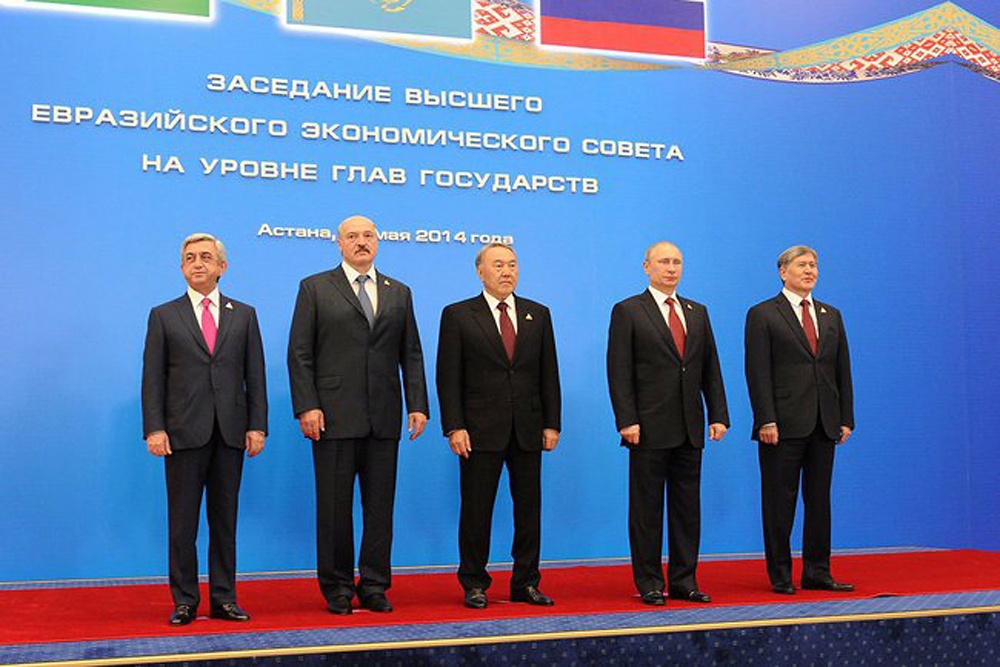 Armenia could join the Eurasian Economic Union as a full member by the end of the year. (Photo: Russian Presidential Press Service)

It only requires a glance at the dance-floor showdown in the Soviet cult-comedy “Mimino” to see that competition between the tiny South-Caucasus neighbors of Georgia and Armenia can run strong. No less so with economic alliances.

“I had the same feeling for Georgia today as many years ago with regard to the Baltic countries [when they joined the European Union in 2004] -- regret, jealousy and pain . . .” bitterly commented 60-year-old Yerevan historian Anahit Chilingarian on June 27, when Georgia, Moldova and Ukraine signed historic pacts with the EU.

Until last fall, many Armenians believed that their country, too, like Georgia, was headed toward an association agreement and free-trade deal with the European Union. Then, on September 3, 2013, Armenian President Serzh Sargsyan unexpectedly announced Armenia’s “willingness” to join the trade-club seen as the EU-alternative -- a customs union with Russia, Belarus and Kazakhstan.

Now, while Georgia celebrates its closer ties with the EU, Armenia appears to be still in the Customs Union’s waiting room.

On July 1, the latest in a series of deadlines for Armenia’s CU-readiness, Russian President Vladimir Putin announced that the membership-agreement had been dispatched to fellow Customs-Union members Belarus and Kazakhstan for approval, and that Armenia would join the bloc “in the nearest future,” RIA Novosti reported.

The next day, Kazakhstan’s foreign minister, Erlan Irdisov, crept closer to an exact date for a signed agreement, naming this October as a possibility, Interfax-Kazakhstan reported.

Armenian Prime Minister Hovik Abrahamian told journalists last week that “something will be clear after July 3,” but did not exclude additional delays, news outlets reported.

That haziness has prompted some younger Armenians to charge that Yerevan is headed back into the Soviet past, when ultimate decision-making power rested with Moscow. By contrast, they believe that Georgia’s decade of reforms, particularly its aggressive anti-corruption campaign, looks more to the future.

In a country that takes pride in a string of superlatives – site of the world’s oldest winery; the first state to adopt Christianity – that perceived difference galls many.

“The bad thing is that our intellect and everything is more fit for Europe than that of the Georgians,” complained 26-year-old youth counselor Parandzem Hovhannissian, expressing a common prejudice. “We just have no other option because of the stupid policy of our authorities.”

But others see no advantage to swapping an historical ally for Europe.

“The Customs Union and Russia are the best option for Armenia, which is in a state of war…,” asserted 52-year-old Vahram Mkrtumian, an unemployed Yerevan resident, in reference to the 26-year-long conflict with Azerbaijan over the territory of Nagorno Karabakh. “Who needs Europe with its distorted morals? [Russian President Vladimir] Putin is strong; he will keep us safe.”

Twenty-seven-year-old hairdresser Lusine Hovakimian agreed. “I want my children to live in a normal country where a woman is a woman, and a man is a man, with no stupid gender issues and Eurovision Conchitas,” she asserted in reference to the 2014 pop-music competition’s Austrian drag-singer winner.

Pro-government TV, which routinely promotes Yerevan’s alliance with Russia, plays a role in viewers’ Euro-skepticism, but sociologist Aharon Adibekian believes that most Armenians support the Customs Union because so many depend on remittances from Russia.

According to Central Bank data, as of this May, individuals in Russia had dispatched to Armenia $120.4 million in private money transfers, or 83.2 percent of the total amount received. Overall, such transfers accounted for 17.3 percent of the country’s 2013 Gross Domestic Product of $10.43 billion.

“Many people link their lives, incomes, and everything with Russia, and it has its explanation,” Adibekian noted.

In April 2014, 55-percent of roughly 2,000 Armenians surveyed by the Caucasus Research Resource Centers said that they “fully” or “rather” support joining Russia’s Eurasian Union; 41 percent backed the EU.

Yet Conchita or no, the Armenian government is trying to maintain ties with the EU and to cultivate business opportunities in Georgia, which serves as Armenia’s main corridor for exports and imports, including from Russia.

On June 18, during an official visit to Tbilisi, Armenian President Serzh Sargsyan expressed confidence that the two countries joining opposite economic blocs will enhance the opportunities for Armenian and Georgian businesspeople alike.

“Armenia’s membership in the Customs Union opens up perspectives for investments in Armenia for Georgian businesspeople, who have or wish to have a market in the Russian Federation or any other country of the Customs Union,” he predicted.

Other Armenians see perspectives in Georgia aside from business.

“Years ago, when someone was traveling to Georgia, everyone would warn them to be careful,” recollected 37-year-old Lusine Aleksanian, speaking of the early post-Soviet era when crime and corruption ran amuck in Georgia. “But now Georgia is changing with big steps, and I am happy to have the possibility to travel there and to see that.”

Historian Chilingarian believes that successful protests by young Armenians against perceived abuses of power by officials – land-use and higher public transportation fees in Yerevan – show that Armenia, as well, can reinvent itself.

“Civil society, represented by young people, is increasingly raising its voice and finding solutions,” she said. “I hope we will one day stand up for similar great changes.”