The row over Russian troops stationed in the country comes as Yerevan calls for Moscow to step in and prevent a worsening humanitarian crisis in the breakaway region. 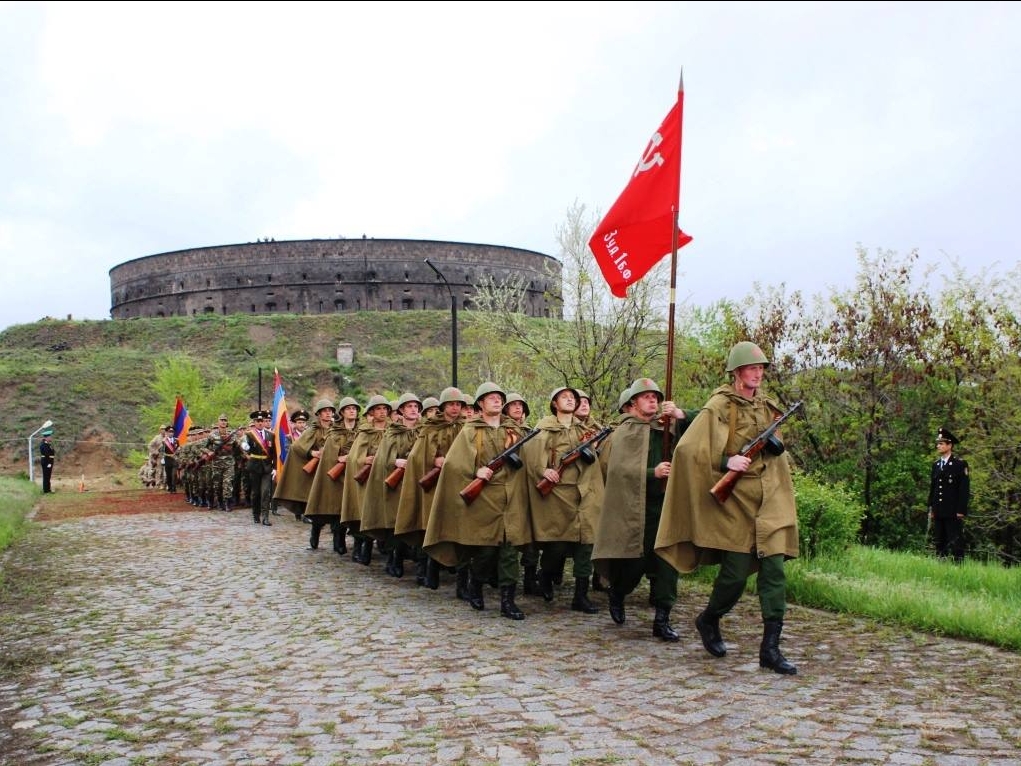 Russian soldiers based in Gyumri march in a 2018 parade. (Russian Defense Ministry)

Dozens of protesters have reportedly been arrested in Armenia’s second-largest city after authorities broke up a rally outside a Russian military base on January 8. Activists are demanding the South Caucasus nation cut ties with Moscow amid a worsening standoff with Azerbaijan over the breakaway region of Nagorno-Karabakh.

In a statement seen by local media, Armenian police confirmed that 65 people had been detained during the demonstration near the 102nd Military Base in the city of Gyumri. Around 100 protesters are said to have marched to the barracks, where up to 3,000 of Moscow’s troops are stationed, close to the border with both Turkey and Georgia.

A livestream of the rally showed detainees struggling with plainclothes and uniformed officers, including notorious riot police units known as the Red Berets, while crowds chanted slogans calling for Armenia’s withdrawal from the Collective Security Treaty Organization. The Kremlin-led military alliance has come under fire in recent weeks after Russian peacekeepers failed to reopen the Lachin Corridor, the only road in or out of Nagorno-Karabakh, which has been closed by Azerbaijan for almost a month, leaving 100,000 ethnic Armenians trapped with supplies of food and medicine running low.

"The police detained more than 100 citizens, but many Gyumri citizens joined us," protest leaders said in a statement.

The rally was organized by the National-Democratic Axis, a bloc of opposition groups that includes the nationalist Sasna Tsrer Pan-Armenian Party, which came to prominence in 2016 after a group of 31 gunmen affiliated with the organization stormed a police station in the capital Yerevan. Three police officers were killed and a further 26 injured in that standoff, with the hostage-takers demanding the resignation of then-President Serzh Sargsyan and an end to “Russian colonialism.” Sasna Tsrer has since publicly renounced political violence.

The 102nd Military Base has long been a lightning rod for Armenians critical of Russia’s role in the region.

The murder of a 57-year-old local Armenian woman in 2018, allegedly at the hands of a Russian soldier, ignited anger in Gyumri and saw a series of demonstrations staged by opposition groups. Just three years prior, a Russian serviceman stationed on the base, Valery Permyakov, massacred seven members of a local family, including a two-year old girl, with major protests held to demand he be brought to justice. Permyakov was eventually sentenced to life in prison.

Two years before that, a pair of young boys from Gyumri were killed by a landmine planted close to the base in a stretch of scrubland used by villagers for grazing animals. Despite poor security and a lack of fencing around the minefield, no action was taken against those responsible.

In 1999, a pair of Russian officers opened fire with Kalashnikovs on locals at a market in the city, killing two civilians and injuring dozens more. An investigation determined that they were inebriated, but reports later stated the two had been transferred to Russia and released before the end of their prison sentences.

This time though, the protesters are capitalizing on growing anti-Russian sentiment across Armenia.

Since December 12, the sole route in or out of Nagorno-Karabakh has been closed to virtually all traffic after self-described Azerbaijani environmental activists set up camp on the road. Known as the Lachin Corridor, the highway has been under the control of Russian peacekeepers since the end of the 2020 war between Armenia and Azerbaijan over the region, kept open for humanitarian use under the terms of a trilateral ceasefire agreement brokered by Moscow.

Inside Azerbaijan’s internationally recognized borders but controlled by its ethnic Armenian majority since the fall of the Soviet Union, the unrecognized breakaway state is now almost entirely cut off from the outside world. Locals say supplies of food, medicine and other basic goods are running low, and Armenian officials warn the threat of a famine is “tangible.”

Azerbaijan denies the corridor is closed, but simultaneously accuses the Armenians of using it to export illegally mined gold at the expense of the environment and bringing in military hardware. Baku insists it should have the right to inspect vehicles entering the region.

With the peacekeepers doing nothing to restore the flow of vehicles and supplies, officials in Yerevan are openly questioning the Kremlin’s commitment to upholding the status quo. “We expect more practical steps from the international community, including the Russian Federation,” Armenian Prime Minister Nikol Pashinyan said in a speech last week. Just days before, he accused Moscow of “becoming a silent witness to the depopulation of Nagorno-Karabakh" and said the prospect of a multinational UN mission should be explored. Azerbaijan has ruled the demand as unacceptable.

“Sasna Tsrer is a far-right party and has always been advocating cutting ties with Russia,” one senior Armenian official told Eurasianet on the condition of anonymity. “But this time many sympathize with their decision to protest against the Russians.”

Meanwhile, in Stepanakert, the de facto capital of Armenian-held Nagorno-Karabakh, a group of demonstrators marched on the disused airport that serves as the headquarters for the Russian peacekeeping contingent on December 27 to call for the blockade to be lifted. “We wanted to speak with the Russian officers,” one local told Eurasianet, “but the soldiers there said they couldn’t get hold of General [Andrei] Volkov, the commander.”

In September 2022, after Azerbaijani forces launched an offensive against Armenia, Pashinyan called on Moscow to intervene under the terms of the CSTO treaty which in principle considers an attack on any member to be an attack on all of them. However, the request fell on deaf ears, with the bloc dispatching a fact-finding mission instead.

Unprecedented protests were held in Yerevan in the wake of the decision, with demonstrators flying Ukrainian flags and holding signs demanding Armenia’s withdrawal from the alliance.

Now, with the humanitarian situation worsening, Armenia is calling on Western nations to step up and help resolve the crisis, with the U.S., EU and a number of other nations calling on Azerbaijan to reopen the road.

“In this post-war period of insecurity and uncertainty, only one thing is certain: that Russia has become clearly unreliable and consistently unpredictable,” Richard Giragosian, director of Yerevan’s Regional Studies Center, told Eurasianet.

“Since Moscow’s failed invasion of Ukraine, the logic and expectations of Russian security obligation to Armenia no longer apply,” he adds. “The Azerbaijanis are acting because they can.”