An anti-government rally was broken up by police, who dragged away several of the leaders. Ruling party officials, meanwhile, are laying low since capitulating to Azerbaijan. 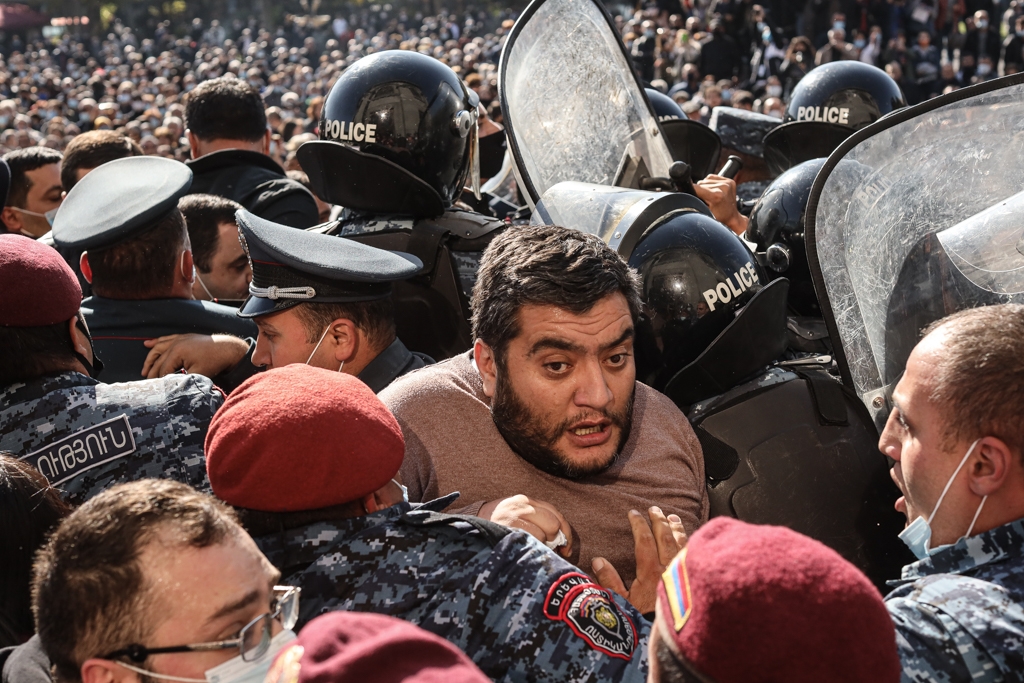 Armenian police detained several opposition leaders during an anti-government rally on November 11 as the country continues to boil in the wake of a harsh military defeat by Azerbaijan.

The rally was organized by a coalition of parties that have recently banded together to lead opposition to Prime Minister Nikol Pashinyan, seeking to take advantage of his weakness following the loss in the war.

Shortly after the protest began, with speakers addressing a crowd of perhaps 2,000 from the steps of Yerevan’s opera house, several hundred police officers, many in riot gear, poured into the square. Loudspeakers announced that the rally was in violation of martial law provisions against unauthorized assemblies.

Officers forced their way through the throng and roughly dragged away several of the organizers as the crowd jeered. Some threw bottles of water at the police, others tried to take the riot shields or the officers’ helmets. They chanted: “Nikol – traitor!”

Among the detained: Eduard Sharmazanov of the Republican Party; Garnik Isagulyan, head of the National Security party; and Ruben Melikyan, the former human rights ombudsman of Nagorno-Karabakh and now head of a legal-aid NGO in Armenia.

Separately, other prominent figures were reportedly taken in for questioning to the National Security Service, including the leader of Prosperous Armenia, Gagik Tsarukyan; former president Serzh Sargsyan; and the NSS’s own former head, Artur Vanetsyan.

After some time the protest rally continued, with lower-level party officials speaking.

“To save Karabakh we need to start a national liberation struggle,” one speaker, Ishkhan Sagatelyan of the Armenian Revolutionary Federation – Dashnaktsutyun, told the crowd. “We are now forming a committee for saving the motherland. We are calling on the entire Armenian people to stand up and defend Karabakh. But there is one obstacle: Nikol. We need to immediately get rid of Nikol, the evil of the nation.”

Later, police arrested dozens of participants of the rally. 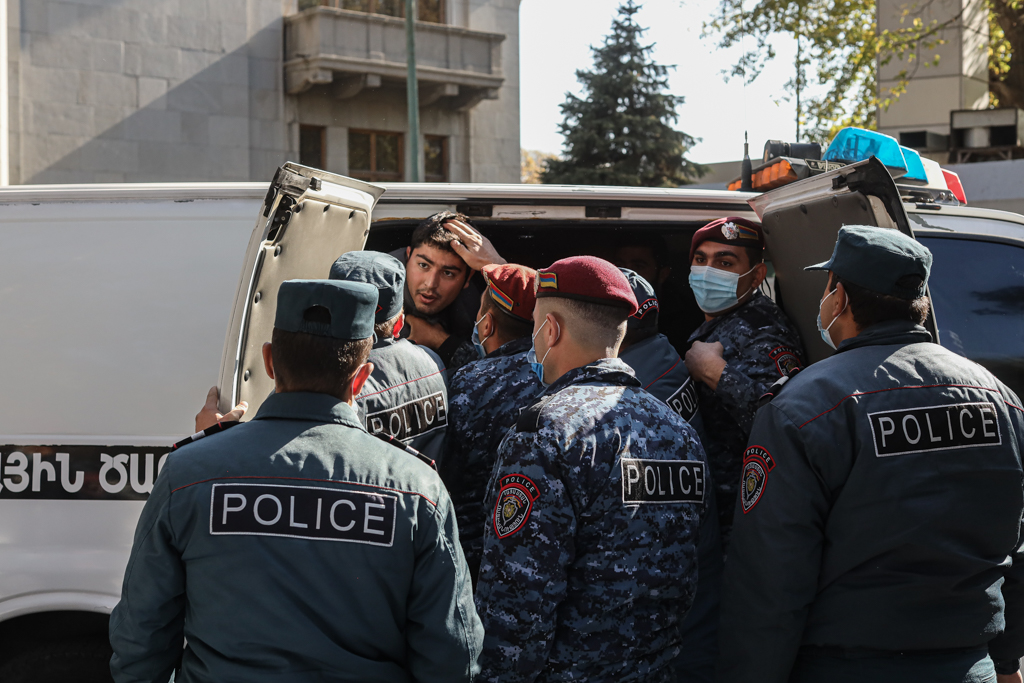 While many Armenians have lost faith in Pashinyan, the challenge to his rule will be softened by the lack of a clear alternative. The parties that organized the rally have limited public support, many discredited by their association with the hated former regime, which Pashinyan ousted in the “Velvet Revolution” of 2018.

While protesters agreed that Pashinyan should resign, there was little suggestion of who could replace him. “People complain about [former presidents] Robert Kocharyan, Serzh [Sargsyan]. And I don’t support them either,” one 50-something protester, Marina, told Eurasianet. “But they never did anything like this.”

Meanwhile, Pashinyan and other ruling party officials have been laying low and few have made any public statements. Pashinyan has been issuing Facebook live videos from an undisclosed location to hit back at his opponents.

The prime minister did receive some key backing from Defense Minister Davit Tonoyan, who gave an interview to public television defending, in detail, Pashinyan’s decision to sign the agreement .

And even at the protest rally Pashinyan had his defenders. Standing toward the back, watching the proceedings, was 70-something Mels Bakaryan. He said he continued to back Pashinyan, believing that the prime minister had no choice but to sign the agreement.

“His biggest mistake was that he was too soft toward these people,” Bakaryan said, gesturing toward the speakers. “He came to power in a revolution and he should have dealt with them using the logic of revolution.”