Recent moves toward restoring relations with Armenia’s traditional enemies have run into strong resistance from the global diaspora. But will it make a difference? 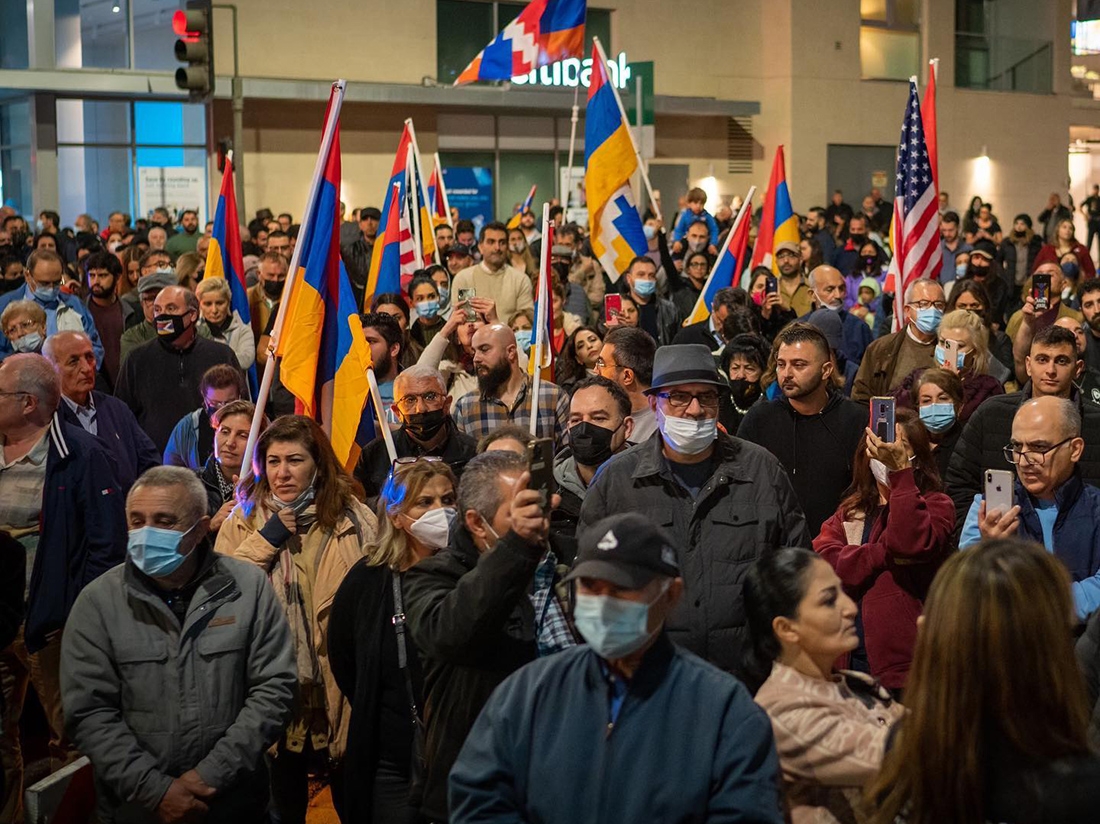 As Armenia moves toward normalizing relations with Azerbaijan and Turkey, the reaction from some parts of the global Armenian diaspora has been fierce. But will that opposition have any influence on the course of this potentially historic process?

The Armenian diaspora, officially estimated at about 7 million around the world, has traditionally been deeply invested in national questions: Many in the diaspora are descendants of survivors of the Armenian genocide, and the more recent conflict with Azerbaijan is often seen by Armenians as a continuation of the persecution they suffered in the Ottoman Empire.

Now Yerevan is working to reach a peace agreement with Azerbaijan following their 2020 war, and simultaneously moving toward reestablishing ties with Turkey. Still traumatized by the defeat in the war, many Armenians have opposed the processes as a sellout of their national interest.

That sentiment is particularly sharp among members of the diaspora.

Diaspora media and social media has been full of angry rhetoric against the normalization processes, and diaspora political organizations like the Armenian Revolutionary Federation - Dashnaktsutyun (ARF) have been organizing protests against them.

The largest Armenian diaspora lobbying organization in the United States, the Armenian National Committee of America (ANCA), which has strong ties to the ARF but has traditionally tried to stay out of domestic Armenian politics, has openly turned against Prime Minister Nikol Pashinyan.

In a May interview, Armenia’s Diaspora Commissioner Zareh Sinanyan called the ARF’s opposition to Pashinyan “treason,” and when he made a subsequent tour of the U.S. he repeatedly faced hostile crowds accusing him and Pashinyan of being the traitors. “The demonstrators reminded Sinanyan that the diaspora will continue to remain vigilant about the future of Armenia and that he and his boss are the real traitors for attempting to silence the diaspora,” the diaspora newspaper Horizon Weekly wrote of one such episode.

And the recent wave of protests in Yerevan against the government’s moves toward normalization have been heavily backed by diaspora members and organizations present in Armenia.

Garen Megerdichian, a 47-year-old Canadian-Armenian investment banker, moved to Armenia in 2015. He and his family have been regulars at the protests, as he says the government is wrong to pursue normalization with Turkey without demanding first that Ankara recognize the genocide and offer reparations to Armenians. (Yerevan has said it is negotiating “without preconditions.”)

Megerdichian said he hoped the protests would force Pashinyan and the current government to resign and be replaced by a “transitional unity” government. But they have thus far failed to gain traction.

While the diaspora is often thought of in monolithic terms, there are significant differences in political views and level of engagement. They depend particularly on whether they are from the wave who fled the genocide or the wave who left after the collapse of the Soviet Union.

“There is a vocal opposition to normalization and a silent majority who are either indifferent or more prone to compromise,” said Razmik Panossian, a Canadian-Armenian historian and political scientist and director of the Armenian Communities Department at the Calouste Gulbenkian Foundation, a Portuguese arts and education organization.

One prominent example of a diasporan prone to compromise is Serj Tankian, the outspoken Armenian-American rock star who has defended Pashinyan and the negotiations processes and has been branded as a traitor as a result. In June, he released a new song with Armenian unity as the theme.

“Division, violence, and treasonous condemnations have over time metastasized and gotten way out of hand,” he wrote in a recent open letter. “They are creating disunity and hate in Armenia and in the diaspora. It is time to stop it.”

The 2020 war – in which Armenia lost to Azerbaijan and lost control of most of the territories it had won in the first war between the two sides in the 1990s – was a turning point in relations between the diaspora and Armenia. It disillusioned many Armenians about the role the diaspora can play in the country’s affairs.

The war “did galvanize the diaspora considerably but the defeat, the subsequent despair and the current political crisis has led many to tune out of the politics of Armenia and the region,” Panossian said.

The abrupt shift in Pashinyan’s messaging – from a triumphalist “We will win” during the 2020 war to a focus on peace now – has disoriented many in the diaspora, said Vicken Cheterian, a Lebanese-Armenian journalist and scholar.

“Since the catastrophic end of the war there has been no explanation about what happened,” he said. As a result, “the part of the diaspora that was mobilized in 2020, which could have been used as a resource, is disengaging. Then there is another vocal part that is reacting by anger, looking for ‘traitors,’ and following the slogans of the street opposition in Yerevan. The diaspora has no deep analysis of Azerbaijan, nor Turkey, only fear that those two states are hostile towards Armenia and towards Armenians in Karabakh.”

While many Armenians have in the past thought of the diaspora as a tool that could serve to blunt Azerbaijan’s advantage in size and oil wealth, that myth was punctured by the 2020 war, said Benyamin Poghosyan, head of the Yerevan think tank Center for Political and Economic Strategic Studies.

“There was always this comparison made, that ‘they have oil and we have the diaspora.’ But the diaspora couldn’t prevent the war,” he said. “It also created this confusion in the diaspora, that ‘OK we have been sending money to Armenia for 20-25 years hoping that security is guaranteed but we lost Artsakh [an alternate Armenian name for Karabakh]. So the war has resulted in mistrust, or the end of the myth, in the diaspora and in Armenia.”

While there is a popular perception that the diaspora wields heavy influence on Yerevan’s political decisions, especially vis-a-vis Turkey, that may be an exaggeration.

Diaspora Armenians can make loud public objections but their real political influence is minimal, Cheterian said. “The diaspora failed to be a political force because the diaspora does not think about politics, nor has it developed political institutions to influence Armenia. Its influence is marginal,” he said.

During the last attempt at normalizing relations between Armenia and Turkey, in 2009, the ARF was able to play a mild spoiler role because it was a coalition partner with the ruling Republican Party of Armenia of then-President Serzh Sargsyan (though the process ultimately was scuttled by Azerbaijani pressure on its ally, Turkey). It left the coalition to protest the normalization process.

Now, though, the ARF is in the opposition – and is one of the leaders of the ongoing street protests.

Typically, the Armenian government has effectively outsourced its lobbying efforts abroad to diaspora organizations, who have focused primarily on issues like genocide recognition. But after Pashinyan came to power in 2018, his government sought to hire its own lobbyists in the U.S., in an apparent attempt to take some control away from the diaspora organizations, with which Pashinyan and his government had already had a tense relationship.

“The elected government of Armenia should set the foreign policy of the country,” while “diasporan political and civil society organizations should be free to mobilize and lobby on any issue they choose,” Panossian, the Canadian-Armenian political scientist, said. “Ideally, the two parts of the nation should consult each other and coordinate their efforts. That has not really happened in the last 30 years, and there is no chance of it happening in the foreseeable future.”

There are also few economic levers that the diaspora has over affairs in Armenia. The largest diaspora charity organization, the All Armenia Fund, has a budget of about $11 million per year. Meanwhile, “Armenia has been able to issue Eurobonds for $700 million dollars. There are discussions about $2.6 billion from the EU. No, the diaspora is not in a position, it’s not funding the state [to the extent that it can say,] ‘I can cut off funds and Armenians will face real difficulties,” said Poghosyan of the Center for Political and Economic Strategic Studies.

Even as many diasporans oppose the normalization processes, Armenia has little choice but to pursue them, one high-ranking government official told Eurasianet on condition of anonymity.

“The Armenian government knows that a lot of diaspora organizations and people in general are very against the idea of open borders, but the reality is that a little can be done,” the official said. “It’s understandable, the cards are bad, but the government should try to play them well despite the bad hand. As unimaginable as it is, just like many countries in Europe we can live next to each other and communicate and keep disliking each other. We are talking about survival … not morals and emotions. New trade routes are forming and if we stay out of them, we stay poor; and if we are poor, we can’t defend ourselves.”

Note: The original version of this piece incorrectly attributed a quote to Garen Megerdichian; it has been removed. And it also corrects the spelling of Razmik Panossian's last name.