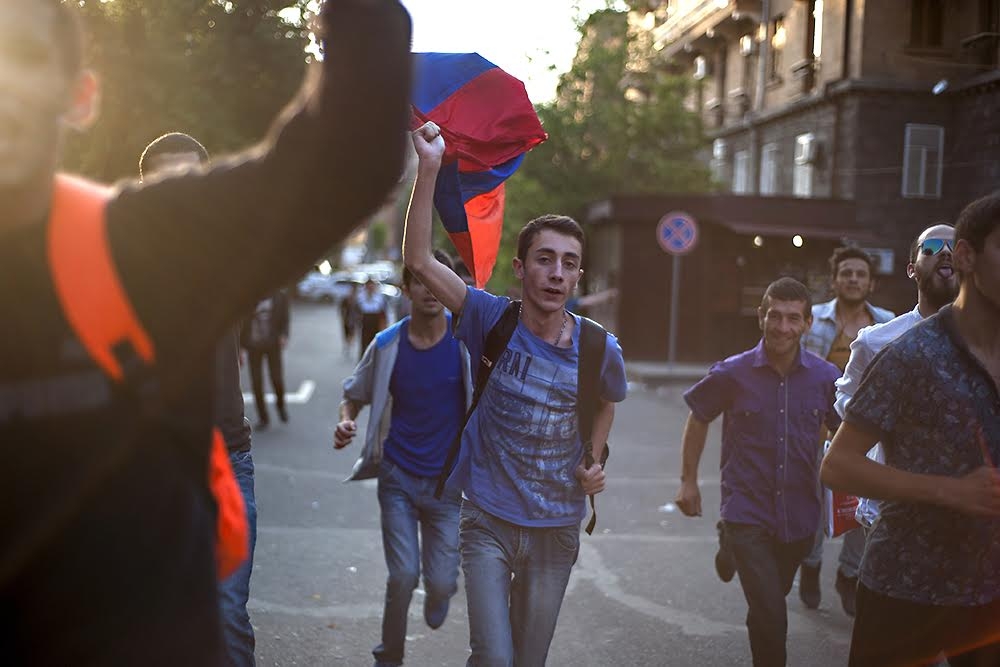 Waving Armenian flags, protesters run through the streets of downtown Yerevan to join the growing weeklong rally against the rise in electricity rates. Protesters insisted the gatherings in the capital were not about Russia or the EU, but only Armenia. (Photo: Nazik Armanakyan)

The Electric Yerevan protest in the Armenian capital did not manage to attain the critical mass needed to transform into a Euromaidan-type event, leading to an overhaul of the country’s political system. But local analysts believe that Electric Yerevan will nevertheless prompt changes in government policy.

Brought together by discontent over the intended rate hike, the protesters never articulated clear political demands, nor developed a concrete action plan. As the days passed, the number of protesters in the streets dwindled. When police took action on July 6 to remove the barricades, after protesters had pledged to move them slowly toward the presidential residence, resistance was minimal.

In contrast to an earlier effort by authorities to break up the protest, police took individuals into custody peacefully on July 6, with some heard saying: “Be careful! They are our sisters and brothers.” The 46 detained on July 6 were quickly released from custody, along with 240 individuals detained on June 23.

Some civil society activists in Yerevan, including Cooperation for Democracy Center Chairperson Stepan Danielian, said the fact that the protesters held their ground for so long represented a political victory – sending a signal to authorities that they would be held accountable for their actions.

“Definitely, the youth won. They kept the street closed for 13 days, the government did not dare to open up the avenue, and that was definitely a victory,” Danielian said.

“It is hard to say who the winner was in this fight,” Yenokian said. “Definitely, Baghramian Avenue [the protesters] could dictate its will, and the government was able to pursue something from Russia, and serious processes have been launched by this fight.”

While the longer-term impact of the protest may be open to debate, it is clear that it had an immediate impact in several areas of public concern. For one, the Armenian government is pledging to cover the increase in electricity prices itself and to have auditors review the company’s operations. Already, regulators have announced a 75-million-dram fine ($158,412). Russia also is agreeing to convene an intergovernmental commission to review the company’s transactions.

More significantly, in an apparent bid to curry public favor, it agreed that a Russian soldier, Private Valery Permyakov, charged with the murder of an entire family in the northern city of Gyumri, the site of additional protests, will be tried by an Armenian court, instead of a Russian military tribunal.

When considering the longer term, the protest showed that authorities cannot act with a sense of impunity. “They [officials] have to consider public opinion,” said Artur Sakunts, director of the Vanadzor office of the Helsinki Citizens’ Assembly, a human rights organization.

“Events in Baghramian Avenue were a lesson for our authorities, and they realized that Armenian society is unpredictable,” added Sakunts.

Others appear to have that impression as well. Already, the country’s water distribution network has scrapped plans for a 1.4 percent price increase.

Aside from the Armenian government, Russian media outlets made it plain that the Kremlin “felt the danger” of meeting “tête-à-tête with Armenian society,” Sakunts noted.

Mainstream Russian media outlets characterized the demonstration as a potential repeat of Ukraine’s 2013-2014 Euromaidan revolution in Ukraine. Some senior Russian politicians attributed the protest to an alleged American conspiracy.

From the start, activists in Yerevan bristled at comparisons between the Electric Yerevan protest and Euromaidan. Many in Yerevan claimed that their fight was not “against Russia,” but rather “for the sake of Armenia” and was far removed from politics.

The fact that political parties had no influence on the protest prevented it from turning into a Euromaidan, analyst Aghasi Yenokian asserted. He attributed the protesters’ dislike of the Euromaidan label to Russian media influence and Russian propaganda.

Danielian, however, believes the protest is a starting point. “The movement has all the potential to [take a] step back for a while and return in a new, more powerful and more professional manner to solve the problem and become more powerful,” he said.

The group that launched the Electric Yerevan protest, No to Plunder, has set July 14 as the day for a planned march on the prosecutor’s office.