Armenia: Farmers Look for Way out of Debt Trap 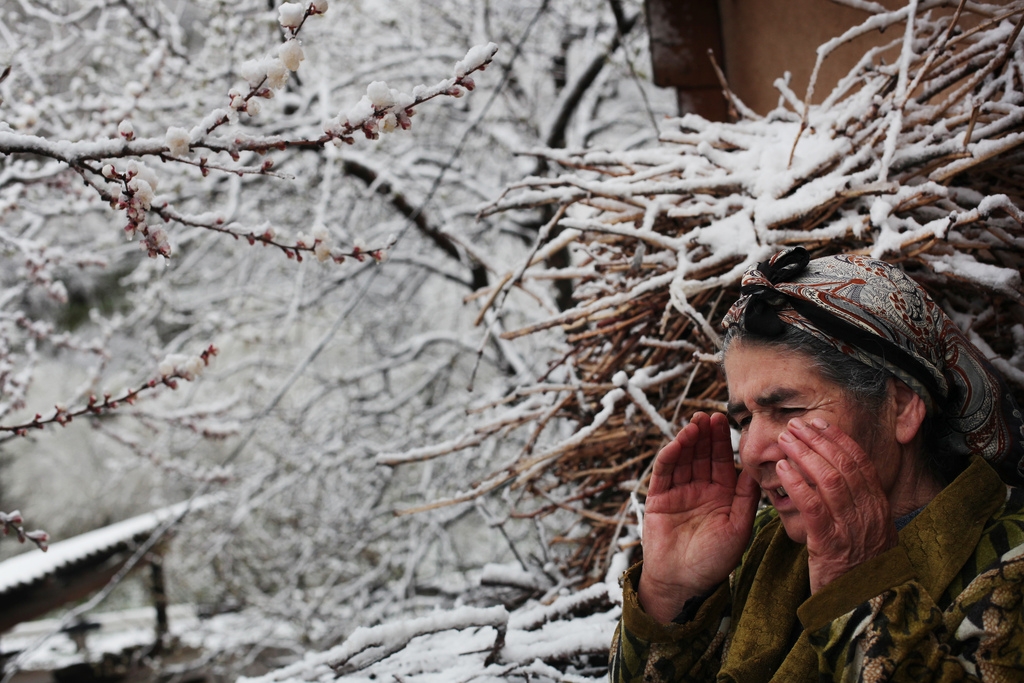 Irifat Babyan looks in dismay at her apricot trees covered in snow. The combination of crop failure and currency fluctuations has left many farmers in Armenia in a deep financial hole. (Photo: Abbie Trayler-Smith/Oxfam via UNDP)

This has been a year that many Armenian farmers would like to forget. First, unfavorable weather led to a poor harvest, and now, thanks in part to the significant devaluation of the national currency, the dram, many farmers are struggling to repay their debts.

The dram’s decline mimics that of the Russian ruble, which has lost about 50 percent of its value against the US dollar this year due to economic sanctions and lower oil prices. The last few weeks have been particularly volatile for the Armenian currency. In November, the exchange rate stood at about 420 drams to the dollar before going into a free fall. In mid-December, the rate plunged to roughly 620-to-one before climbing back to about 470-to-one. The financial roller coaster ride has left many, especially those with loans outstanding, shaken.

The situation in the village of Jrashen, located approximately 30 kilometers from Yerevan, typifies the plight faced by farmers all across the country. Most village residents depend on income generated from harvesting apricots. According to Jrashen Mayor Artyom Ghazarian, 90 percent of the village’s 452 households have taken out agricultural loans to help tend their orchards, as well as buy fertilizers and other necessities. The combination of crop failure and currency fluctuations has left many farmers in a deep financial hole.

“Every family in our village has taken a loan,” Ghazarian said to EurasiaNet.org. “We used to export at least 2,000 tons of apricots annually from our village only, mostly to Russia, but this year was a damned one for us; in addition, we have these loans that the farmers cannot possibly repay now.”

Margarita Harutyunian, owner of one-hectare apricot orchard from Jrashen village, is among those who is “at a loss what to do.”

“Every year our apricot orchard provided for an income worth $10,000. But frosts in 2014 left us with hardly 10 apricots at all,” Harutyunian told EurasiaNet.org. “Now, we have to pay the interest rate of the loan interest, we borrow money to pay the debts, one loan causes another, and there seems to be no end to this.”

In past years, Russia was the main market for Armenian agricultural exports. But Russia’s economic crisis has caused its appetite for foreign fruit and vegetables to wane. Estimates compiled by Armenia’s Ministry of Finance project the volume of agricultural exports to Russia to decline by at least 7 percent this year. The decline is magnified by the fact that exports rose 21 percent and 24 percent in 2012 and 2013, respectively.

Agricultural loans in Armenia tend to be for short terms at high interest rates – up to 20 percent for dram-denominated loans. Dollar-denominated loans are also available at lower interest rates, but such notes have become much more expensive due to the declining value of the dram. “Agriculture is not a profitable sphere in Armenia,” said Aramayis Mkhitarian, the mayor of Aygeshat village in the Armavir Region.

Garnik Petrosian, deputy minister of agriculture, acknowledged that farmers have been hit hard this year. He indicated that the government was working to develop an assistance package.

“The agricultural sphere is not attractive due to high risks; still, certain measures should be taken,” he said. “We’re trying to create a more favorable environment. The minister of agriculture has discussed the situation with the prime minister; some steps have been outlined with regard to subsidizing 6 percent for loans starting next year.”

Another farmer from Jrashen, one who asked for anonymity, had little faith that a government bailout could save farmers from financial ruin. He predicted that the hard times of 2014 would spur a tsunami of labor migration next spring.

“Things couldn’t get any worse,” he told EurasiaNet.org. “People will just leave in spring since they will have no other option.”