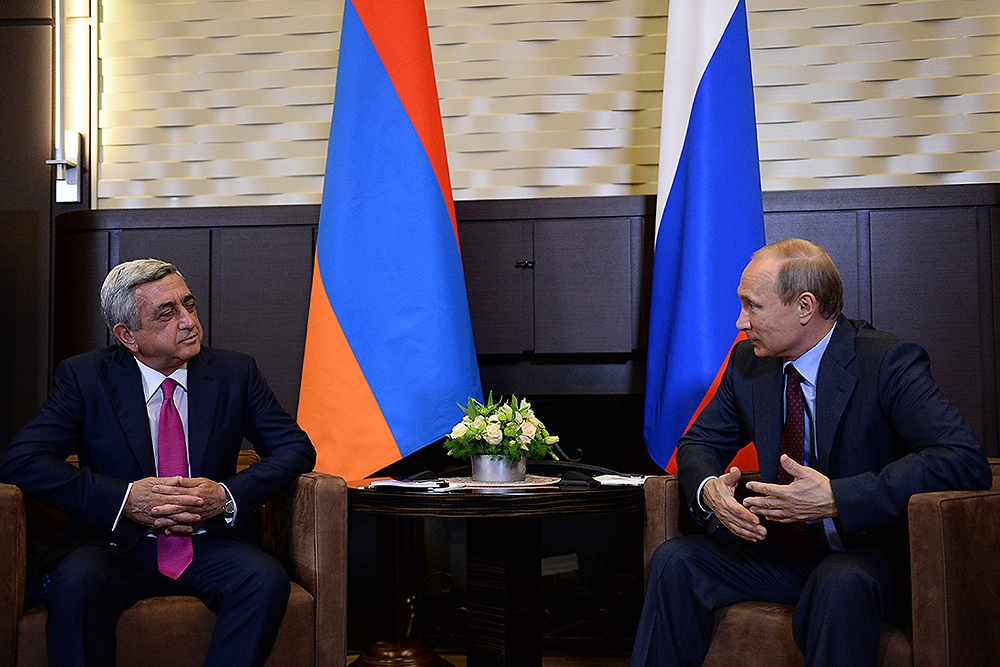 Armenians are seething over Russia’s possible role in the shoot-down of an Armenian helicopter near the frontlines in Nagorno Karabakh. Feelings of betrayal are such that the popular mood is souring on Armenia’s pending membership in a Moscow-led trade bloc.

The source of chagrin in Yerevan is the suspicion that the November 12 downing of the Armenian Mi-24 military helicopter, and the deaths of the three-man crew, had a significant Russian connection: Moscow supposedly supplied Azerbaijan with the Strela air-defense system that was used in the incident, according to Karabakh’s de-facto defense minister, Movses Hakobian.

Armenian leaders are now wrestling with the question of how to respond to Moscow’s perceived indirect involvement. The matter, though not yet voiced publicly by officials, comes at a critical moment for both Armenia and Russia. The Armenian parliament is expected during its upcoming session, which opens December 1, to vote on ratification of Armenia’s agreement on accession to the Russian-led Eurasian Economic Union (EEU).

While the pact is expected to be ratified, some ordinary Armenians, already uneasy about the deal, believe that the helicopter attack should prompt politicians to reconsider. Russia is heralded by officials in Yerevan as Armenia’s chief strategic ally. But the shoot-down incident has many in Yerevan wondering where Armenia stands in the Kremlin’s eyes.

“While smiling at us, Russia sells weapons to our enemy, and we have what we have,” fumed 42-year-old Yerevan schoolteacher Anna Markossian. “This is a sign for us to think once more about joining Russia’s EEU.”

Political analyst Ara Papian agrees. “If Russia is selling weapons to Azerbaijan, how can it be our ally in the world?” asked Papian, who heads the non-profit Modus Vivendi Center in Yerevan. “Such a thing should not happen.”

Anger appears to be mounting within the de-facto leadership of Karabakh. In a November 17 interview with RFE/RL’s Armenian-language service, Hakobian termed the helicopter attack “painful” for the predominantly ethnic Armenian territory because “we [Armenia and Russia] are allies, strategic allies.”

“In my opinion, while thinking about its economic interests” in selling weapons to Azerbaijan, “Russia should take into account our interests, too, but this does not happen,” Hakobian said.

Moscow, which has not recognized Karabakh’s independence, does not consider the territory to be officially an ally.

Yet while Armenian officials have complained before about Russia’s hundreds of millions of dollars’ worth of arms sales to Azerbaijan, the report that a Strela was used to destroy the Mi-24 helicopter has focused attention inside Armenia on a growing perception of inequality in the Russian-Armenian strategic partnership.

Moscow, to date, has called for both sides to refrain from escalating tension, but has not condemned the attack. Nor do many Armenians expect it to do so. Russia recently announced plans to build a strategic railway to Iran via Azerbaijan.

“It speaks to servility, to spinelessness … the fact that Kremlin officials refuse to treat Armenia as a political player,” said human-rights activist Artur Sakunts, a longtime government critic.

Exacerbating sensitivities in Yerevan, Russia, one of the co-chairs of the Organization for Security and Cooperation in Europe’s Minsk Group that oversees the Karabakh negotiations, has not taken public action to pressure Azerbaijan to facilitate the recovery and return of the bodies of the three crew members believed to be killed in the incident.

Armenia and Karabakh state the individuals were Karabakhi soldiers; Azerbaijan, which declines to have official contact with Karabakh’s separatist leadership, claims the dead are Armenian military personnel.

Armenian military officials say ongoing exchanges of gunfire in the area where the helicopter went down are preventing a recovery operation.

Sakunts and other critics fault the Foreign Ministry for supposedly not having done more to secure the bodies.

Deputy Parliamentary Speaker Eduard Sharmazanov, a member of the governing Republican Party of Armenia, has called on the international community to urge Azerbaijan more strongly to grant access to the helicopter crash site. The International Red Cross’ Yerevan office has stated that it is trying to facilitate matters.

In response to EurasiaNet.org’s questions about Armenia’s potential response to the attack itself, Foreign Ministry spokesperson Tigran Balaian said “the steps that are taken for obvious reasons cannot be published.”

One analyst underlined the importance of Armenia’s own diplomatic demarches as it mulls a response to Azerbaijan’s actions.

“Stronger counter-measures will lead to the escalation of the conflict,” noted political scientist Aghasi Yenokian, director of the Armenian Center for Political and International Relations. “I think reciprocal measures have to be of a diplomatic character and they have yet to decide what kind of answer to give.”

The threat of further conflict is all too real to many.

The shoot-down could encourage both the Armenian and Karabakhi forces to embrace a policy of “overwhelming response.” Such an impulse, “risks a new air-war dimension of the Karabakh conflict,” said Richard Giragosian, director of the Regional Studies Center in Yerevan.