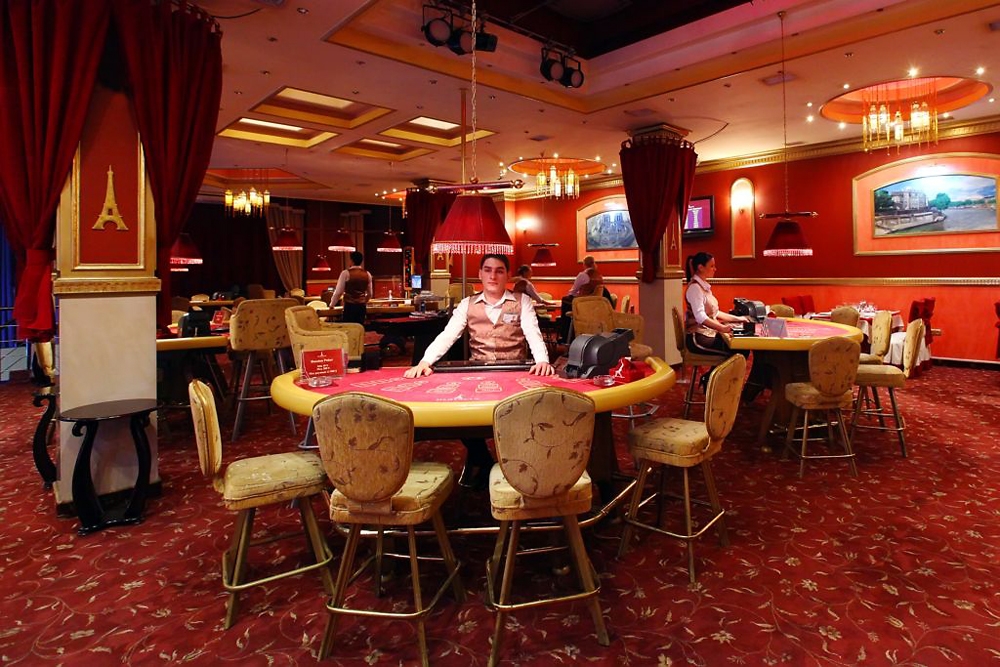 Thirty-eight-year-old Anush Nazarian still remembers the night several years ago that a neighbor, distraught over her husband’s gambling losses, jumped to her death from her 10th-floor apartment.

“The whole neighborhood was shocked. None of us ever thought that one day gambling may come so close to us,” recollected Nazarian, who lives in a large suburb of the Armenian capital, Yerevan.

During the Soviet era, casinos or gaming parlors did not exist in Armenia: gamblers had to roll the dice on the sly. Today, gambling opportunities are everywhere in this poverty-stricken South-Caucasus state; and addiction to games of chance is wreaking financial havoc among many families.

Ten casinos and 100 gaming parlors now exist in Yerevan’s outskirts One of the biggest, Shangri-La, even provides customers with the business cards of psychologists who can assist problem-gamblers. “The number of gamblers has increased 10 times during the past five years,” estimated Samvel Khudoian, a professor of psychology at Armenian State Pedagogical University with extensive clinical and research experience in this area. “The reasons vary from stressful [personal] situations to disappointed expectations.”

A lack of adequate-paying jobs is one of the largest sources of disillusionment for many Armenians. Officially, unemployment stands at 17.3 percent , but independent estimates are much higher. Over a third of the country’s population of just over 3 million people lives in poverty, according to government statistics. Average monthly wages amount to only about 113,163 drams, or $273.53. Many Armenians feel compelled to head abroad as labor migrants, in order to support their loved ones.

Against this backdrop, Yerevan’s brightly illuminated casinos exert a powerful attraction, creating the illusion of a respite from everyday concerns. Ads hint that savvy gamblers can attain a luxurious lifestyle straight out of Hollywood. “People go to casinos and gaming parlors because they fancy they will have luck and get rich,” Khudoian commented. A similar phenomenon exists in Armenia’s economically hard-pressed northern neighbor, Georgia.

Now, two Armenian MPs are trying to address the social consequences of problem gambling by developing legislation that would restrict access to casinos. A set of proposed amendments to Armenia’s gambling law would ban people under the age of 21 from entering a casino and allow for court orders to ban individuals whose gambling can be shown to cause financial hardship to their families. A third measure would allow casinos to deny entrance to individuals at the gamblers’ own request. Restrictions could last from six months to three years, and would apply to all casinos in Armenia. The amendments are expected to be submitted to parliament’s Economic Affairs Committee for discussion during the National Assembly’s June 9-12 session.

Independent MP Edmon Marukian, one of the amendments’ sponsors, says appeals for help from numerous families afflicted by gambling addictions prompted him, along with opposition MP Alexander Arzumanian, to push for changes. Marukian called the problem “very urgent.”

Media accounts often attribute reported suicides -- up by 3.8 percent in 2013 to 768 cases, according to official statistics -- to gambling losses. No studies have been done to substantiate such claims.

The potential impact of the new gambling-related legislation is not straightforward, given that gaming has become a significant source of revenue for the government. In 2013, Armenia’s state budget received “7-8 billion drams” ($16.9 - $19.3 million) in tax revenues and license fees from gambling establishments.  Even while deploring gambling addictions, few politicians are likely to want to see that revenue stream dry up.

The representative of one casino, however, expressed approval of the proposed changes. “In many countries, visiting a casino is entertainment, while in Armenia, and perhaps the whole Caucasus, it is linked with passion [for a better life] and gambling [to earn a living],” said the individual, who requested anonymity. “People will be more protected if there is relevant legislation.”

Looking to problem-gamblers to cut themselves off from casinos might also appear a risky bet. Here, though, the powerful pressure Armenian families can exert on relatives is expected to have an effect.

Aharon Adibekian, a sociologist, contends that restrictions on entering casinos will just prompt gamblers to go elsewhere to gamble – turning the perennial outdoor games of backgammon into money-based events, for instance, or relying on the state-run lottery. “Every third person in Armenia is poor, and people want to buy a lottery ticket and become rich immediately,” he elaborated. “It is not by chance that many lottery games emerged when we had bad living conditions [in the 1990s].”

MP Marukian said the result of self-exclusion restrictions for casinos in “progressive countries” such as Singapore and the US “has always been positive.”

Psychologist Khudoian agrees. “It will work in Armenia as well,” he said.
In response, Adibekian drily recalled an Armenian proverb: “Don’t play heads or tails with destiny. You’ll lose either way.”