Armenia gets aid boost from EU

The country will get a billion more euros than Brussels originally promised. Yerevan is connecting the windfall to the successful conduct of last month’s elections. 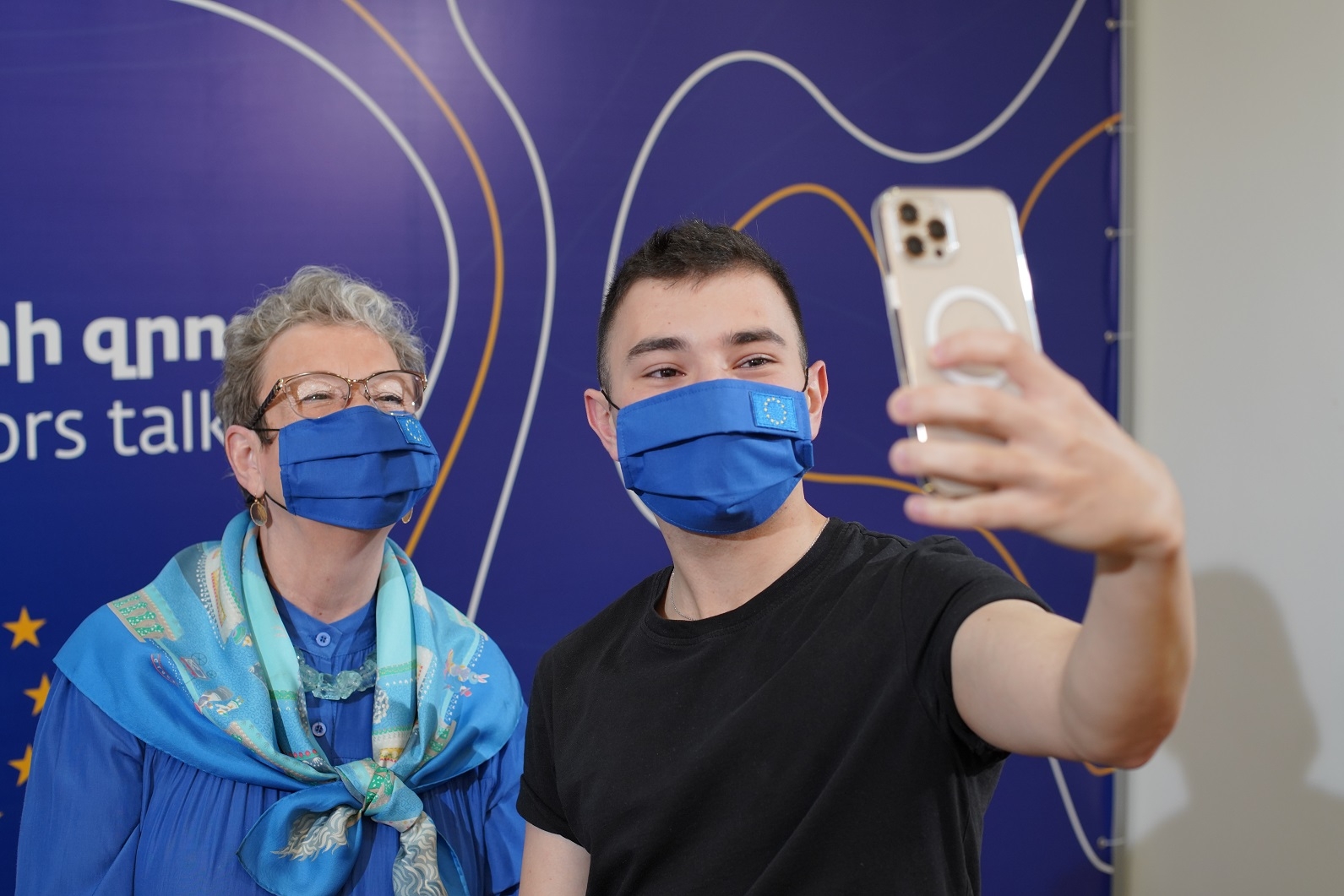 Ambassador Andrea Wiktorin, the head of the EU delegation in Armenia, this week.

The European Union has offered Armenia an aid package of over $3 billion, 62 percent more than previously promised, in the wake of fair elections and as the country tries to recover from defeat in the war with Azerbaijan last year.

The new aid package will total 2.6 billion euros over five years, or $3.1 billion, EU Commissioner for Neighborhood and Enlargement Oliver Varhelyi announced in Yerevan on July 9. That’s 1 billion more euros than the EU had offered in an earlier draft proposal.

The aid is part of a package for the EU’s six post-Soviet Eastern Partnership countries, though Armenia’s share far outweighs what many other countries will receive. Ukraine – with a population of 44 million compared to fewer than 3 million in Armenia – and which has signed an Association Agreement with the EU, is getting 1.9 billion euros. Azerbaijan is getting 140 million euros.

Armenian officials have interpreted the big aid package as a reward for the successfully conducted elections on June 20, in which incumbent Prime Minister Nikol Pashinyan won a resounding victory. The post-election violence that many feared did not come to pass, and the political crisis that has gripped the country since the war defeat has simmered down.

Meeting with Varhelyi, Pashinyan said he regarded the aid as a “reaction to irreversible democratic processes taking place in Armenia.” He pointed out that European observers deemed the parliamentary elections to be “competitive and generally well-managed.”

Varhelyi did not say what the extra money would be allocated for, but he also praised the Armenian authorities’ management of the elections. “I hope that we will soon have a strong government, a strong parliament, and a strong parliamentary majority in Armenia because we have a lot to do,” he said at a joint appearance with Pashinyan.

“The elections encouraged Europe,” said Stepan Grigoryan, head of the Yerevan-based think tank Analytical Center for Globalization and Regional Cooperation, in a July 13 interview with local news website factor.am. “They wanted to see which direction this country is going. […] The additional one billion is connected to the elections.”

The original aid package was earmarked for several specific initiatives, including 500 million euros to support 30,000 small- and medium-sized enterprises and 600 million euros for transportation infrastructure, the EU announced.

That 600 million will be directed toward a new north-south highway to the Iranian border, Minister of Territorial Administration and Infrastructures Suren Papikyan said on July 13. He told reporters the roadwork would involve the construction of several mountain tunnels and bridges and in total would cost an estimated $1.5 billion.

The heavy funding of the road, from Sisian through Kajaran in the southern Syunik province, “indicates that this funding has a strategic meaning for the EU,” Arman Yeghoyan, a member of parliament from the ruling My Step coalition told factor.am. “From India, Iran, the [Persian] Gulf, Armenia, and Georgia, a road to Europe. Six hundred million is allocated for that road alone.”

Iran is also interested in helping construct the road, Tehran’s Minister of Roads and Urban Development Mohammad Eslami said in May when he traveled to Yerevan and met with Papikyan. The two sides agreed to set up a joint working group that will explore Iranian companies’ potential participation in construction of the planned roadworks. The group held its first meeting in Tehran in late June and is scheduled to meet again in Yerevan on August 15.

The funding for that road comes amid discussions of new transportation linkages with Azerbaijan that could render this road redundant. As part of the November 10 ceasefire agreement that ended the war, the two sides agreed in principle to allow Azerbaijan to transport cargo through Armenia to its exclave of Nakhchivan. The restoration of Soviet-era transportation links between northern Armenia and Nakhchivan could present a far simpler route to Iran than this new road, but the negotiations over the new transportation agreement have stalled.

Pashinyan and Varhelyi also discussed the aftermath of last year’s war. “I want to confirm that the EU is ready and committed to taking on a very active role in the post-hostilities situation […] as a facilitator of confidence-building measures,” Varhelyi told reporters.

Yeghoyan also suggested that Armenia’s aid package, in contrast to Azerbaijan’s, was a reward for Yerevan’s more Europe-friendly attitude. The funding “has a clear political undertone because Azerbaijan is refusing to implement reforms, the EU usually provides funding in exchange for reforms,” he said. “Recently the EU and Azerbaijan have had a tense relationship.”