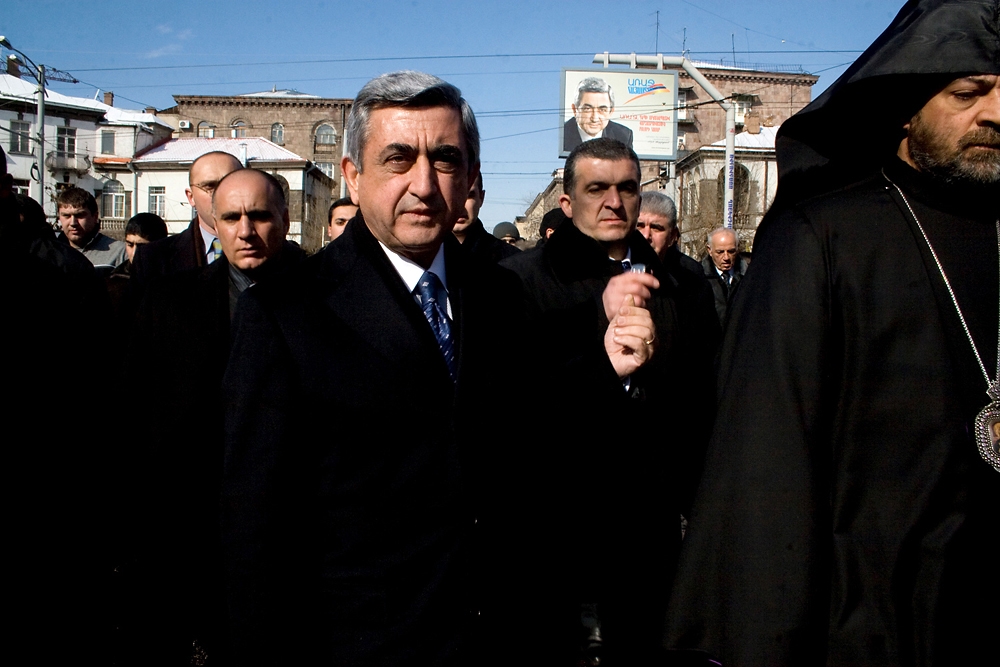 First, it happened in the northwestern city of Gyumri. Then, in the southern region of Syunik. Within the space of seven months, the Armenian government has accepted the resignations of two powerful regional chieftains with long-held track records for alleged violence. But do these departures signal a real intention to hold public officials, including political allies, accountable for their actions?

Critics long have charged that political power in Armenia’s regions often can mean a warrant to behave more like a mafia godfather than a public servant. Media reports of corruption, bribery and indiscriminate use of violence run rife.

But now, with recollections of this year’s protests in mind, President Serzh Sargsyan, who appoints all ten of the country’s governors, has pledged to hold miscreant officeholders to account. “We will be the first to condemn the faults and speak about theft and crimes . . . since this is the price we have to pay to appear on the right path,” he declared on June 29.

Nonetheless, choosing that path is not straightforward. Regional officials routinely rally the vote for Sargsyan’s Republican Party of Armenia (RPA).

That means that Sargsyan, even with no election in sight, “faces a hard dilemma,” commented independent political analyst Yervand Bozoian. “On the one hand, he punishes these people and loses their support because they were providing votes for him. [But] if he does not punish them, the state is decaying little by little,” Bozoian said.

Some observers believe that former scenario occurred during this February’s presidential election, when President Sargsyan lost Gyumri, the site of a Russian military base, to opposition leader Raffi Hovhannisian  by a spread of more than 42 percentage points, an unprecedented defeat.

The loss was attributed in part to the departure of Gyumri’s former mayor, Vardan Ghukasian, an ex-regional RPA boss known as “a good vote provider,” who resigned in October 2012, following a scandal over a city gunfight involving his son, Spartak.

During Ghukasian’s 13 years in office, the city of Gyumri had acquired the name “Little Sicily” for its variety of bloodshed and corruption, often allegedly involving the mayor or certain relatives. Prosecutions were inconsistent, critics claim.

Following Ghukasian’s resignation, however, his son, an ex-con, was arrested for a Gyumri gun battle, though subsequently released. This April, police also scooped up Vardan Ghukasian himself as a potential suspect in a shooting death, a crime to which Ghukasian’s nephew, Vahe, confessed.

Many Armenians, though, see these measures and the government’s acceptance of Ghukasian’s resignation less as a desire for housecleaning, and more as a payback for the loss of Gyumri in last year’s parliamentary elections.

Meanwhile, a similar debate about accountability has emerged in Syunik, a region bordering on Iran that houses much of Armenia’s mining industry, one of the economy’s few cash cows.

Until his resignation last month, Syunik’s 56-year-old Surik Khachatrian, known as “Liska” (“Little Fox” in Russian or based on the Armenian word for “Energized”), ranked as one of the most influential of Armenia’s presidentially appointed governors, a man not easily crossed.

Sargsyan’s 12-percentage-point loss this February to Hovhannisian in Syunik’s seat, Kapan, demonstrated one limit to that influence, however. A fatal June 1 gunfight near Khachatrian’s house in the town of Goris that resulted in the death of one man, Avetik Budaghian, and the serious injury of three others provided a further taint.

RFE/RL reported on July 9 that the father of Budaghian and another victim alleged that an argument between his sons and Khachatrian had preceded the shootout. Khachatrian’s 19-year-old son, Tigran, and a bodyguard have been arrested and charged with murder and illegal weapons’ possession in connection with the incident. Khachatrian told police he was asleep at the time of the murder.

Past instances of retaliatory violence, though, contributed to demands for his resignation, and still raise popular suspicions.

Recently, in a downtown Yerevan hotel, the ex-governor was filmed slapping businesswoman Silva Hambarzumian, who had alleged that he had stolen a mine and mining equipment from her. No punishment followed the incident.

Similarly, in 2008, a US embassy cable released by WikiLeaks cited a “direct source” about a brutal beating delivered by Khachatrian in his office to a teenage boy who had scuffled with his son. No consequences ensued.

“There has been a lack of political responsibility; instead, the authorities have patronized him,” charged human rights activist Arthur Sakunts, chairperson of the Helsinki Assembly’s Vanadzor office.

Even with Khachatrian’s resignation, that plotline has not changed, Sakunts argued. “They did not fire him, but dismissed him according to his own resignation request . . . There is no political will here [for dismissals].”

The Republican Party of Armenia, however, underlines that Khachatrian must be considered innocent until proven otherwise. “If Surik Khachatrian did not resign, he would not be dismissed because if you and I and others are not guilty [of a crime until proven guilty] . . . he is not guilty, either,” commented Deputy Chairperson Galust Sahakian.

Some observers, though, believe that, even with sufficient proof, a criminal prosecution of Khachatrian would not occur so long as the ex-governor supports the president.

RPA Secretary Eduard Sharmazanov objected. “Regardless of whether you are someone’s relative or have a good position or belong to some party . . . you must face punishment in the case that you are guilty,” he said.