Armenia: Has Yerevan Pushed Past a Geopolitical Point of No Return? 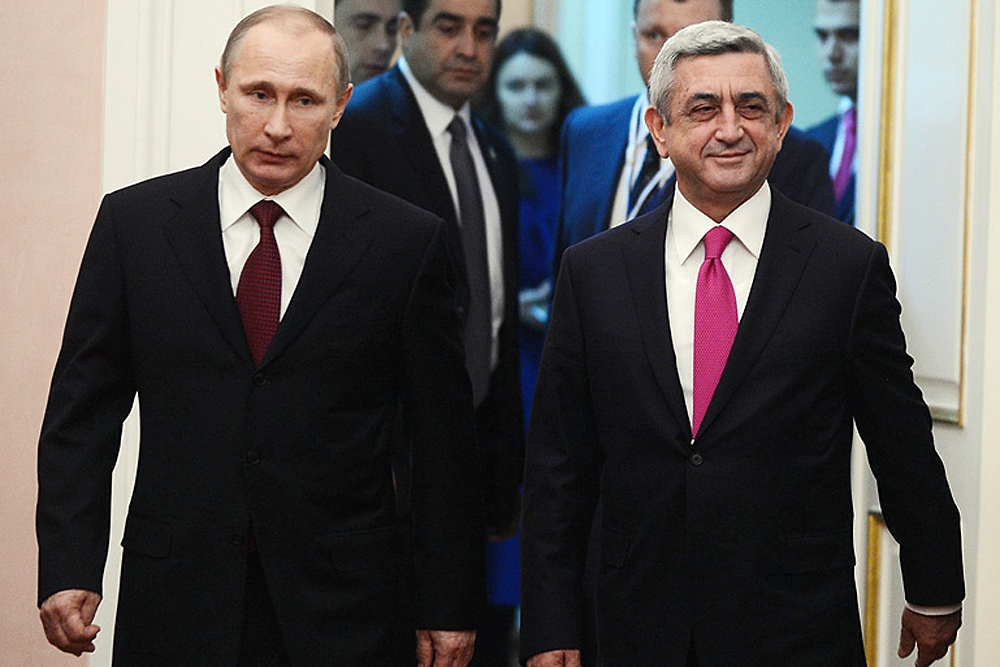 As the Russia-Ukraine crisis unfolds, the Armenian government is casting its diplomatic lot with the Kremlin. Some in Yerevan worry the government is committing a geopolitical blunder by expressing a clear preference for Russia over the West.

While Armenia has always had a special relationship with Russia, and hosts Russian troops on its territory, the government tended to cultivate good relations with the United States and the European Union. However, in recent months, predating the Euromaidan movement’s appearance in Kyiv, Yerevan began to lean strongly in Moscow’s direction, underscored by last fall’s decision of President Serzh Sargsyan’s administration to opt for membership in the Russian-led Customs Union over a stronger EU partnership.

A potential watershed moment occurred March 27, when Armenia voted against a pro-Ukrainian resolution overwhelmingly adopted by the United Nations General Assembly. The resolution, drafted by Ukraine and backed by 99 other states, condemned as illegal the March 16 referendum in Crimea that preceded Russia’s annexation of the peninsula. It was rejected by only 11 nations, including Russia, Armenia, and such international pariahs as North Korea, Sudan and Syria.

Commenting on Armenia’s vote, Artak Zakarian, the pro-government chairperson of the Armenian parliamentary Committee on Foreign Relations, asked in a March 31 Facebook post, “Why should have Armenia not supported its ally, if the latter needed such support?”

A statement by UN Ambassador Karen Nazarian emphasized the right to self-determination, a principle also mentioned by President Sargsyan in his March 19 phone call with Russian President Vladimir Putin, and long championed by Armenia in the Nagorno-Karabakh conflict. Yet Armenian opposition groups, notably the Prosperous Armenia Party (BHK), the country’s second largest parliamentary force, have stated that by joining some of the world’s most notorious “rogue states” in voting against the Crimea resolution, Yerevan dealt a serious blow to the country’s international reputation. “Russia is headed to self-imposed international isolation and it’s dragging us along,” said Alexander Arzumanian, an opposition lawmaker and former foreign minister (1996-1998). Arzumanian spoke of a “serious deviation” from the foreign policy strategy to which successive Armenian governments had generally adhered since independence in 1991.

“That is very bad for Armenia’s image, and our relations with the West,” said another former senior diplomat, who did not want to be identified. “I have never seen such slavishness in foreign-policy-making before. This cannot do us any good. Even the Russians are surprised,” he added.

Armenian foreign policy came to be known as “complementary” during the 1998-2008 tenure of former President Robert Kocharian. It essentially boiled down to combining close political, military and economic links with Russia, Armenia’s main ally, with growing cooperation with Western powers in a range of areas, including security. After succeeding Kocharian in 2008, Sargsyan continued and even stepped up this delicate balancing act; a policy that earned him relatively strong US and EU support.

“We are a nation carrying European values and our aim is to develop our society along the lines of those values,” the Armenian president declared during a June 2013 visit to Poland. In a letter to US President Barack Obama sent shortly afterwards, he described US-Armenian relations as closer than ever before, and claimed that they serve as a “strong prerequisite” for Armenia’s security and economic development.

Just two months later, however, Sargsyan abruptly decided to make Armenia part of the Russian-led Customs Union at the expense of a far-reaching Association Agreement with the EU. While the volte-face was widely attributed to Russian pressure, his pro-Russian position on the Ukraine crisis reinforced that trend.

Some observers wonder what the cost will be to Armenia.

“Whereas in the past, they said in the West that Armenia is under Russia’s influence, they are now openly calling it a discredited Russian satellite,” said the former Armenian diplomat. Although Yerevan will face no punitive Western measures in the months to come, he noted, this negative perception “will manifest itself over time.”

Washington already declined in December to provide multimillion-dollar economic assistance to Armenia under its Millennium Challenge Account program, even though Yerevan in November met domestic reform criteria set by the US government agency handling the aid scheme. The latter gave no reasons for the rebuff. Armenia has also missed out on even more large-scale aid that was promised by the EU before Sargsyan’s Customs Union U-turn.

Despite the unmistakable signs of a cold front moving in from the West, the Armenian government continues to speak about of a complementary foreign policy. On March 6, Sargsyan told a Dublin summit of the European People’s Party that “Armenia will continue its policy of complementing and harmonizing interests.” Similarly, Armenian Prime Minister Tigran Sarkisian, during a March 20 visit to Brussels, expressed hope that the EU would sign with Armenia, as with Ukraine, the political segment of an association agreement.

Swedish Foreign Minister Carl Bildt ruled out such a possibility on March 23, telling RFE/RL that Armenia no longer has a “political affinity” with the EU.

For its part, the US has voiced disappointment about Armenia’s vote against the UN resolution on Crimea, but, in written comments to EurasiaNet.org, the US Embassy in Yerevan said that it continues “to engage with Armenia on many issues.”

Among those issues are Armenia’s increased military cooperation with the North Atlantic Treaty Organization, which includes Armenian participation in the NATO-led missions in Afghanistan and Kosovo, and international efforts to resolve the Karabakh conflict. President Sargsyan assured visiting members of the NATO Parliamentary Assembly on March 27 that his administration remains committed to “the effective and constructive cooperation” with the alliance.

But whether such cooperation is enough to patch over the growing differences with the West is uncertain. “I think authorities presume that this is a temporary deviation [from complementarism] and that eventually they will be able to get back on track and our Western partners will understand us,” said Arzumanian. “But I have serious doubts on this score because such a return would be very difficult.”

Emil Danielyan is a journalist based in Yerevan.