The new government has placed a high priority on fixing the country’s lamentable roads. Reviews have been positive. 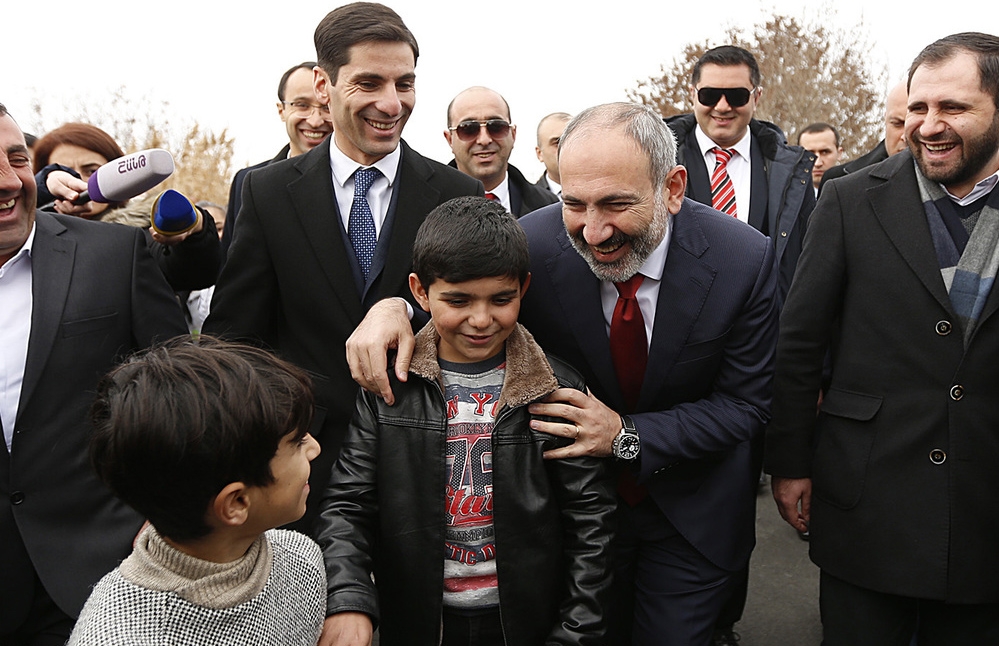 Samvel, a precocious 10-year-old, challenged the prime minister to fix the main road in his village. (government handout)

As a graduate student in Tbilisi, Arpi Gabrielyan was the veteran of many shared taxi rides to and from her home in Yerevan. She described the former condition of the road, especially the part in Armenia south of the Georgian border, as a “horror.”

“In the car, you would shake constantly, it was impossible not to get carsick,” Gabrielyan told Eurasianet. “Every time I traveled I was so angry, thinking ‘how can an international road be in this condition for years?’”

But after making a return trip to Tbilisi in January, Gabrielyan was pleasantly surprised. The road, once as much pothole as asphalt, is now smooth. “There’s no comparison,” she said.

Of all the changes in the “new Armenia,” none may be as visible as the country’s new roads.

For years, the country’s highways were in a catastrophic state, even by regional standards. Official indifference meant that little effort was made to improve the situation, and endemic corruption often meant that what money was spent was just stolen.

But since taking power in spring 2018, and then winning a dominant majority in parliament that winter, the government has made road repair one of its top priorities. The Ministry of Territorial Administration and Infrastructure, the body responsible for road construction, said in a statement to Eurasianet that in 2019, 335 kilometers of road were repaired for 28.6 billion drams ($60 million). In 2020, the ministry expects to repair a further 500 kilometers of roads.

“Roads are the veins of the country and they are directly connected to country’s economic development,” Deputy Minister of Territorial Administration Bagrat Badalyan, told Eurasianet.

In December, Prime Minister Nikol Pashinyan wrote on Facebook that he had just traveled one new section of the Yerevan-Tbilisi road. He recalled that when he visited Georgia in May 2018, he was told that drivers there refused to take tourists to Armenia because their cars would be damaged by the country’s abysmal roads. “It was embarrassing for me,” Pashinyan said. “Today, I traveled on this very road and I can say it has never been in a better condition.”

Alek Asatryan, a minibus driver on Yerevan-Tbilisi route, agreed. “It’s really much better,” he told Eurasianet. “Before it would take five and a half or six hours, now it’s down to four.” He said he expects the travel time to further decrease once more repairs close to the border are completed.

Soon on the agenda: Armenia’s other main international artery, the road connecting Yerevan to the country’s southern neighbor, Iran.

This road has long been slated to be improved as part of a North-South Road Corridor program, backed by international financial institutions and launched in 2012. But the repairs were scheduled to have been finished by now, and only 31 kilometers of 550 have been resurfaced. Armenian law enforcement is currently conducting a wide-ranging investigation into corruption around the project.

The Ministry of Territorial Administration and Infrastructure is seeking a new contractor for the project and should choose one by next year, Badalyan said.

Among those suffering from the delay is the Khachikyan family in Meghri, on the Iranian border, where they have a historic home in which they rent out rooms to tourists. Or they try. The seven-plus-hour drive from Yerevan turns many people off, one member of the family, Shahane Khachikyan, told Eurasianet. “Many people see our house [online] and want to visit, but they give up at Kapan or Goris,” towns along the way, she said. The southernmost part of the route makes innumerable twists around mountains, and “a tunnel would be a life saver,” she said.

In November, the government got a 1.7 million euro grant from the European Union to start work on a project, estimated to eventually cost $1 billion, to rebuild that road. The project would cut down the distance between the towns of Sisian and Qajaran to 60 kilometers from the current 120 thanks to an eight-kilometer tunnel, which alone will cost about $320 million, Badalyan said. “Our plan is to start with the tunnel, and get the most difficult part done,” he said. The ministry is angling for another $50 million EU grant and for other loans from European banks.

Another planned tunnel will go from Qajaran to Agarak, and “both projects will be the real kickstart of the North-South road,” Badalyan said.

When the new road is completed, “you’ll be able to go from Yerevan to Meghri and back in a day,” he added.

In addition to the economic impact of new roads, the government is keenly aware of the PR impact.

In March 2019, Pashinyan visited the town of Sis, in the province of Ararat near the Turkish border, and reportedly promised to fix the main road in the village.

Two months later, RFE/RL released a documentary from the village and included a scene with Samvel, a precocious 10-year-old boy, who challenged the prime minister.

“Nikol [Pashinyan] promised the work would start right away but he didn’t follow up,” Samvel told the journalists. “My goodness, where is it?” The cheeky boy’s challenge went viral on Armenian social media, and eventually the road was fixed. Pashinyan returned in early December to inaugurate the new road and to meet Samvel.

The boy remained skeptical, though. “I don’t know about the thickness of the asphalt and so on,” he said, as Pashinyan and other officials laughed. “Time will tell.”