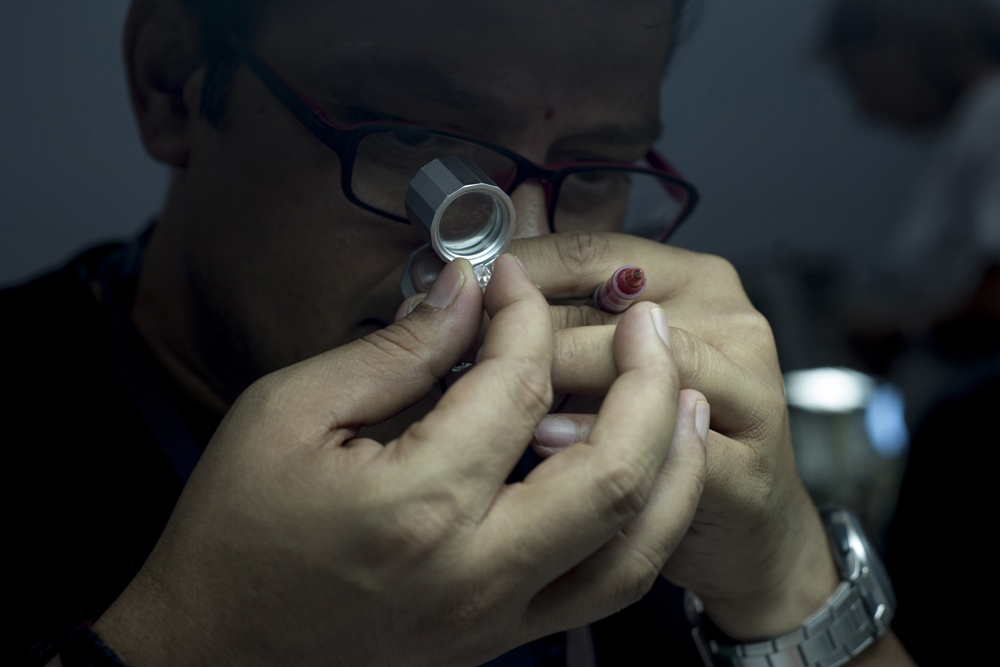 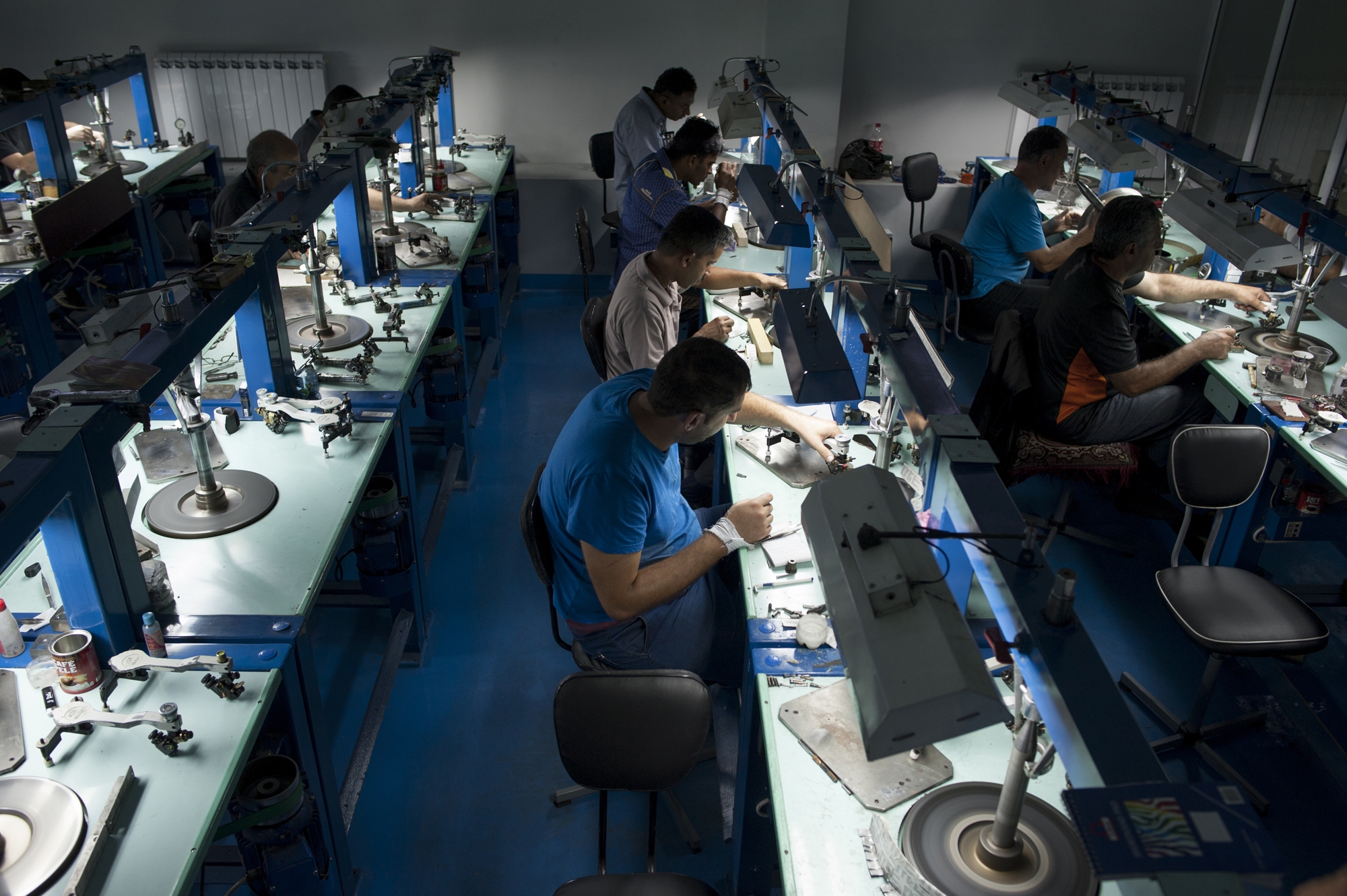 Dimotech employs 150 diamond workers at its facility in the village of Nor Hatchn, the hub of Armenia’s diamond operations. 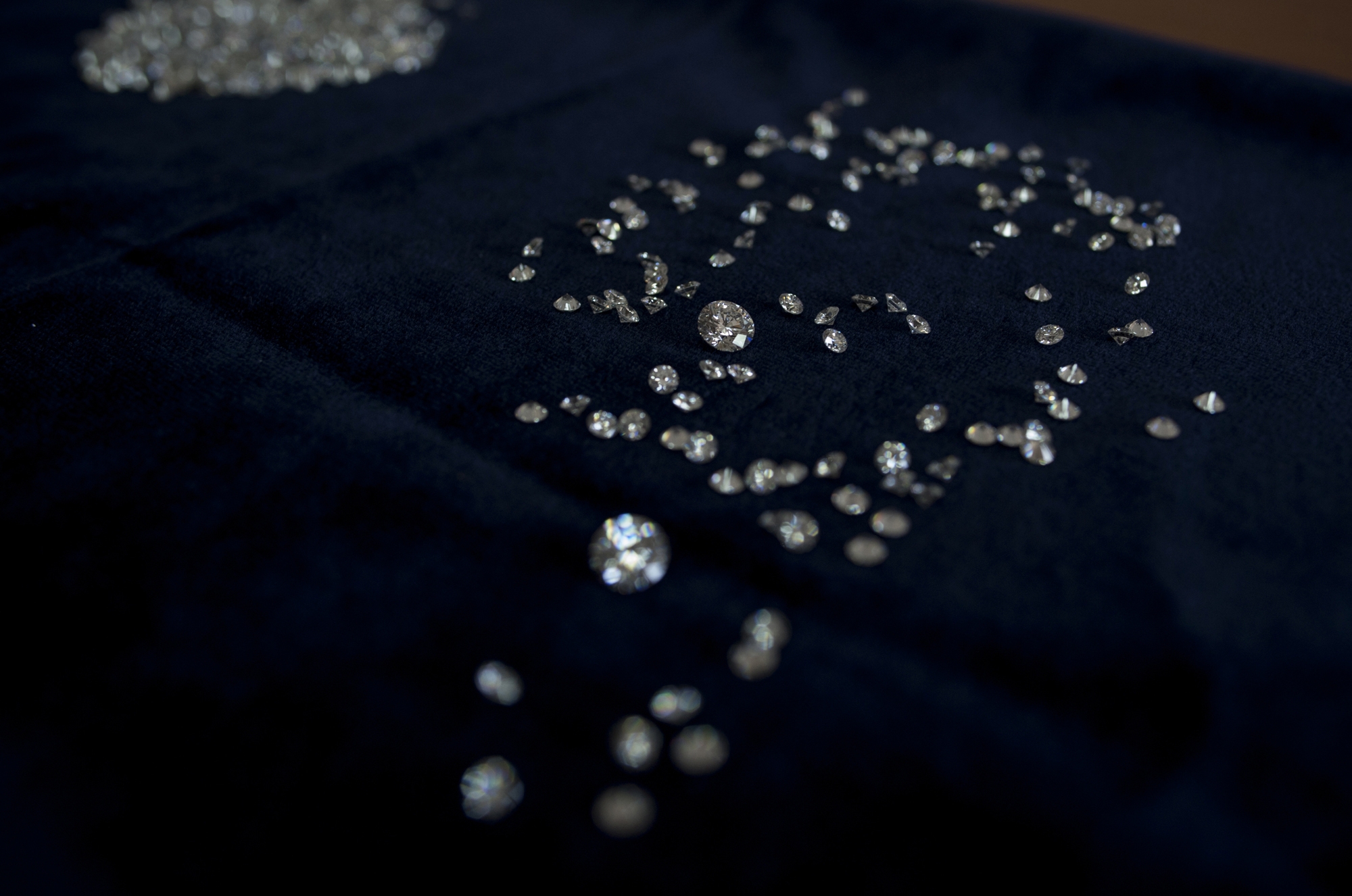 Many of the diamonds that are refined in Armenia originate from Russian mines. 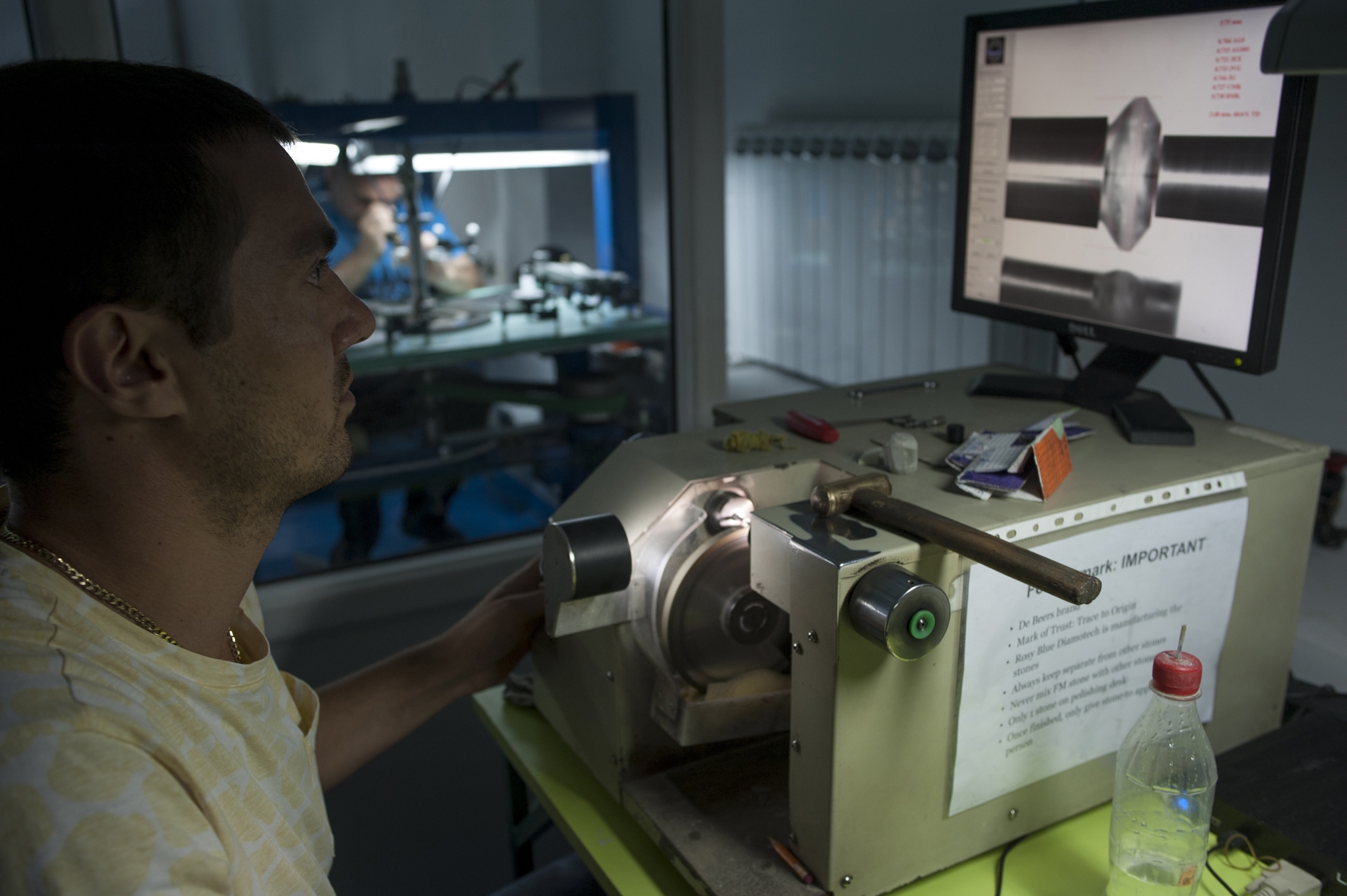 Khachik Poghosian, who returned from Moscow three months ago, operates a polishing machine. 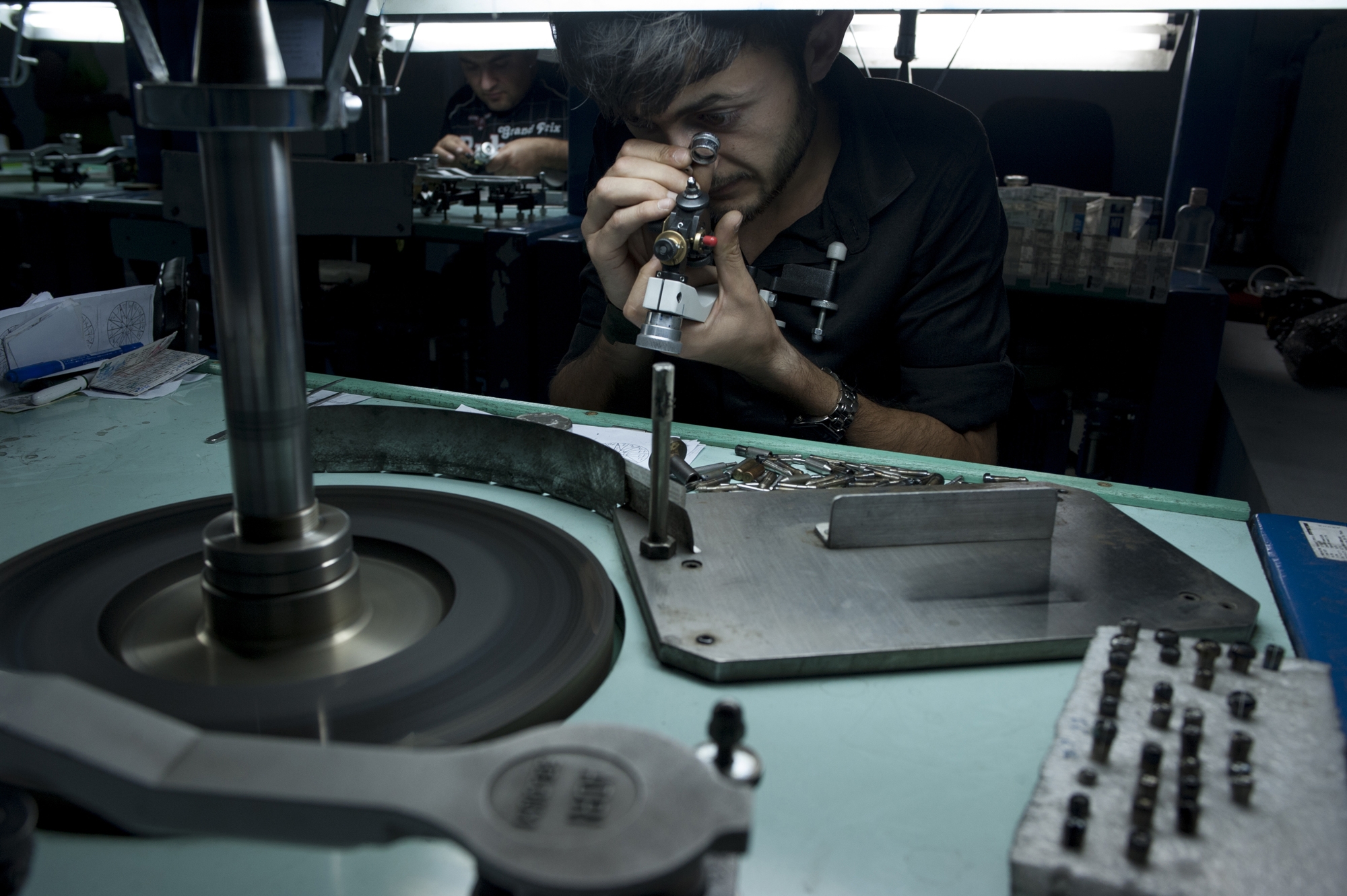 At 22, Harutyun Karapetian is the youngest polisher employed by Dimotech. 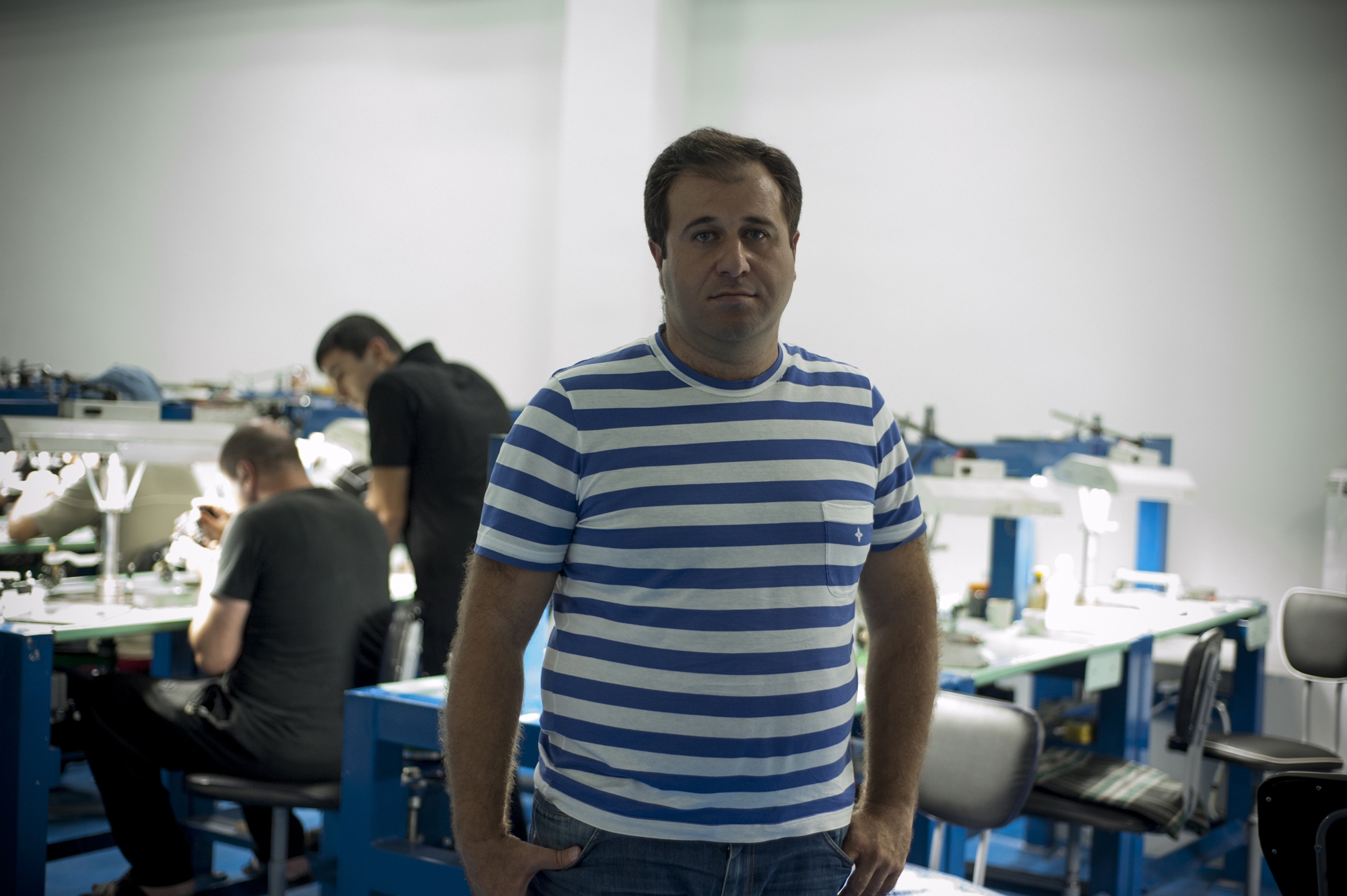 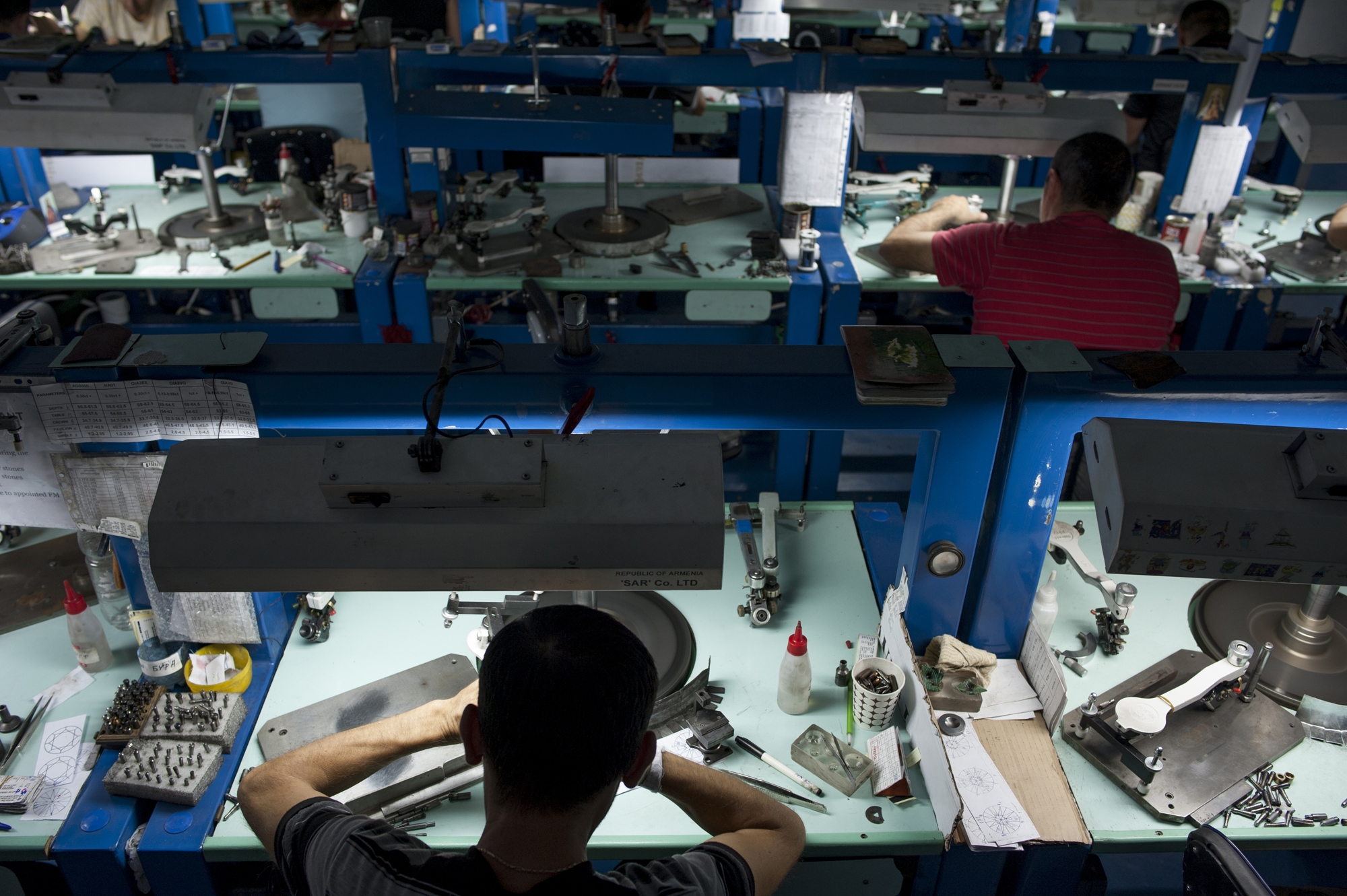 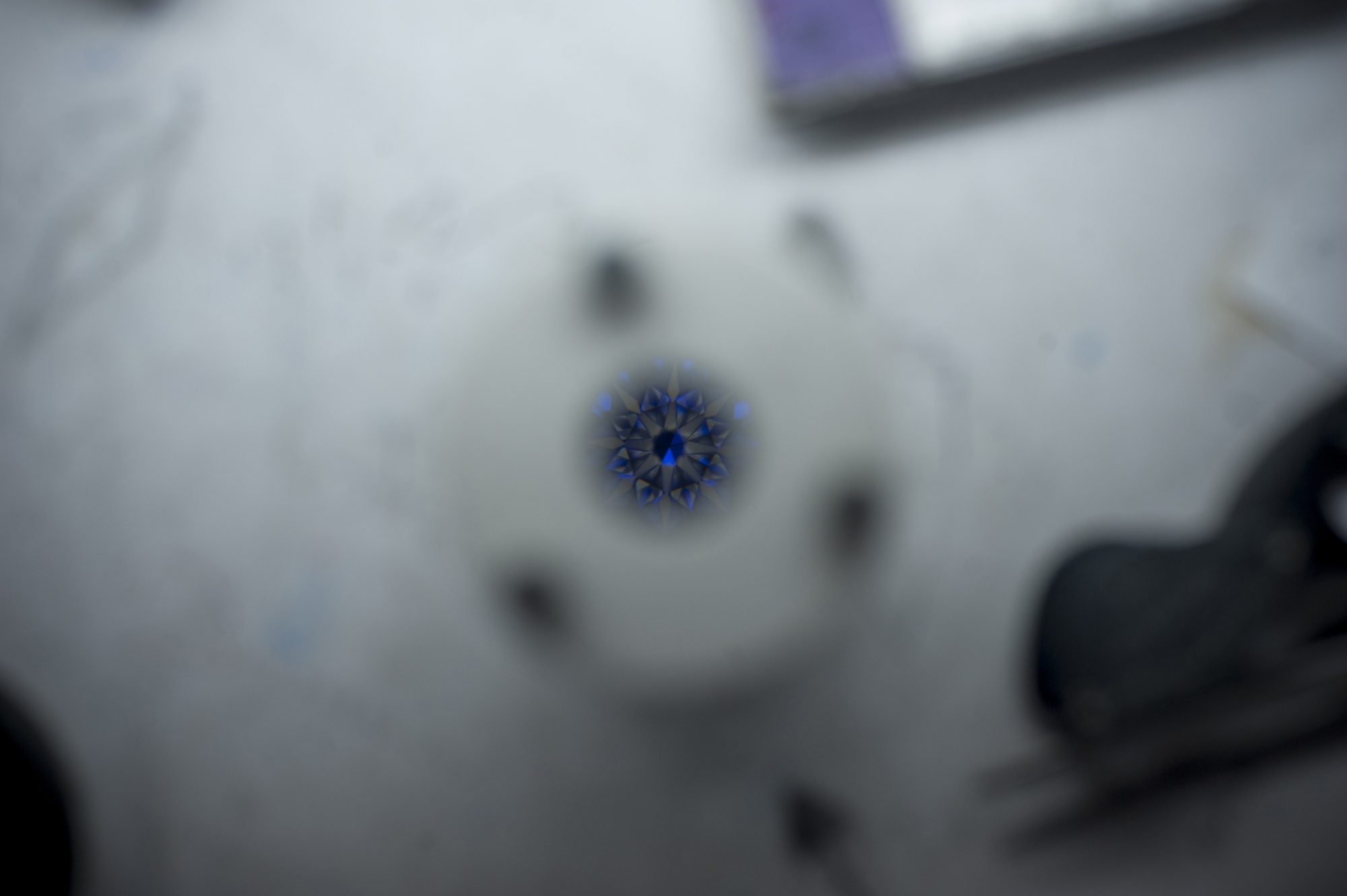 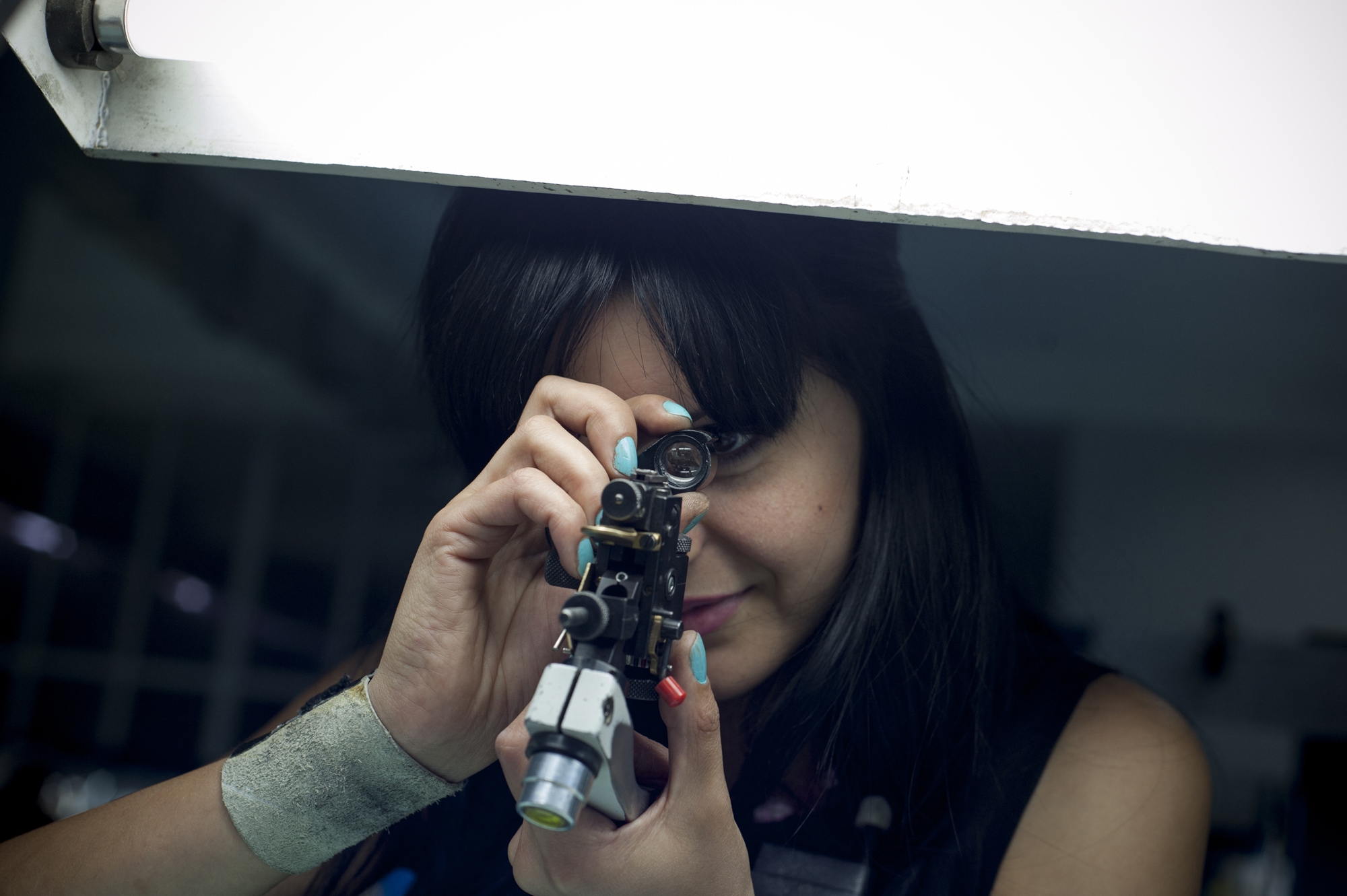 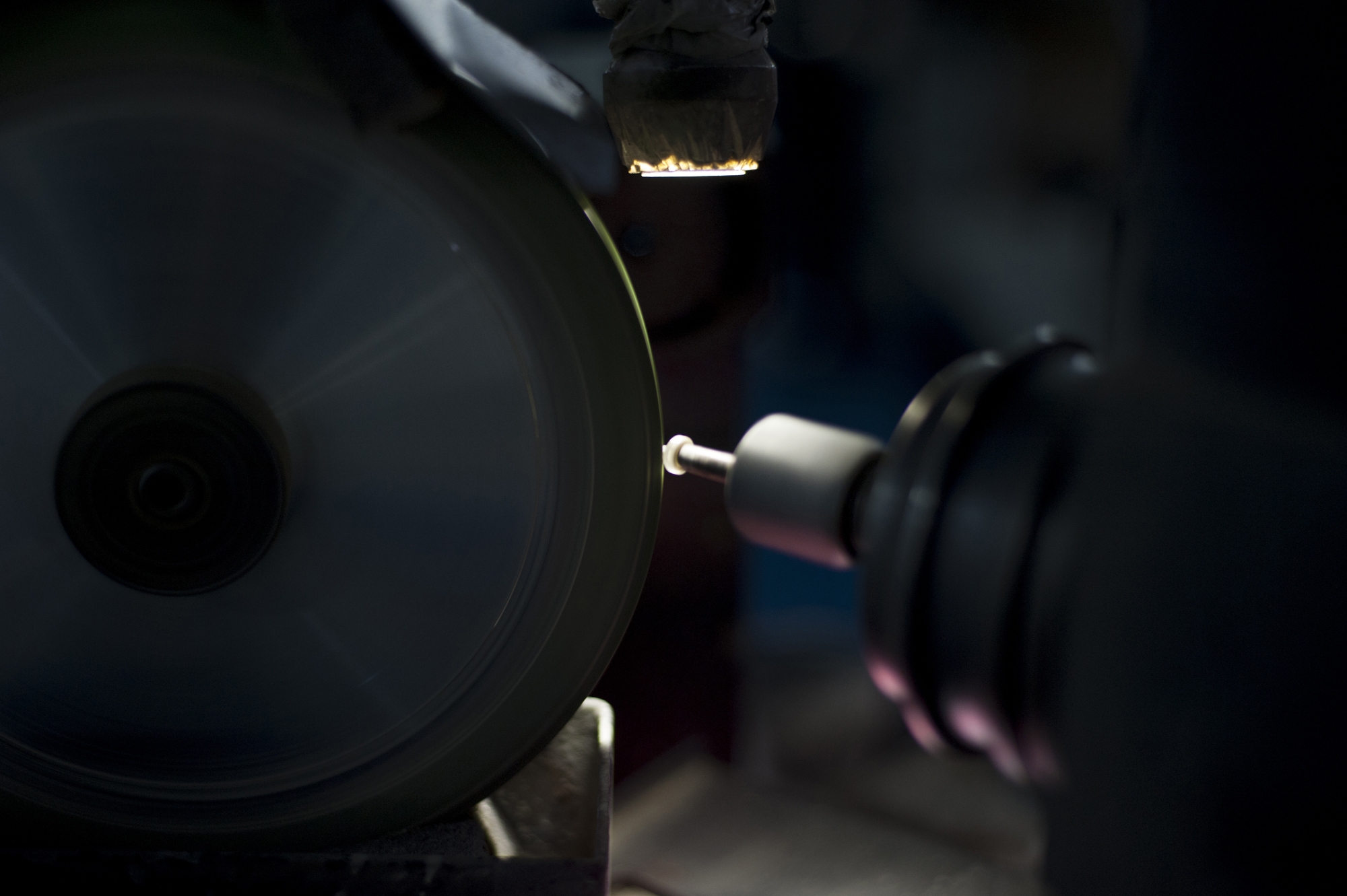 Only 20 of about 200 diamond workshops that existed in Nor Hatchn during the early post-Soviet period still function today. 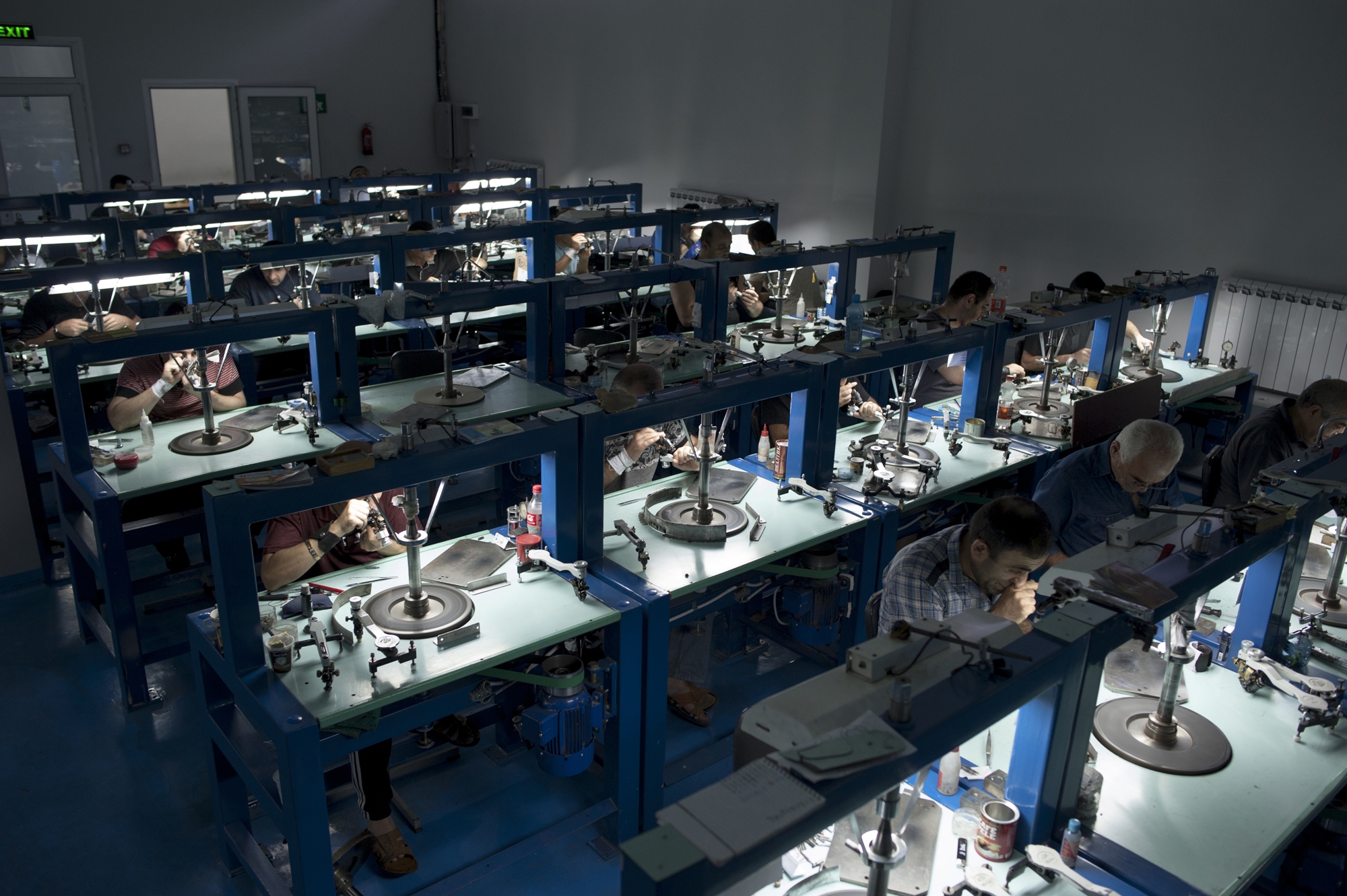 Armenia was once the center of the Soviet Union’s diamond-refining operations. 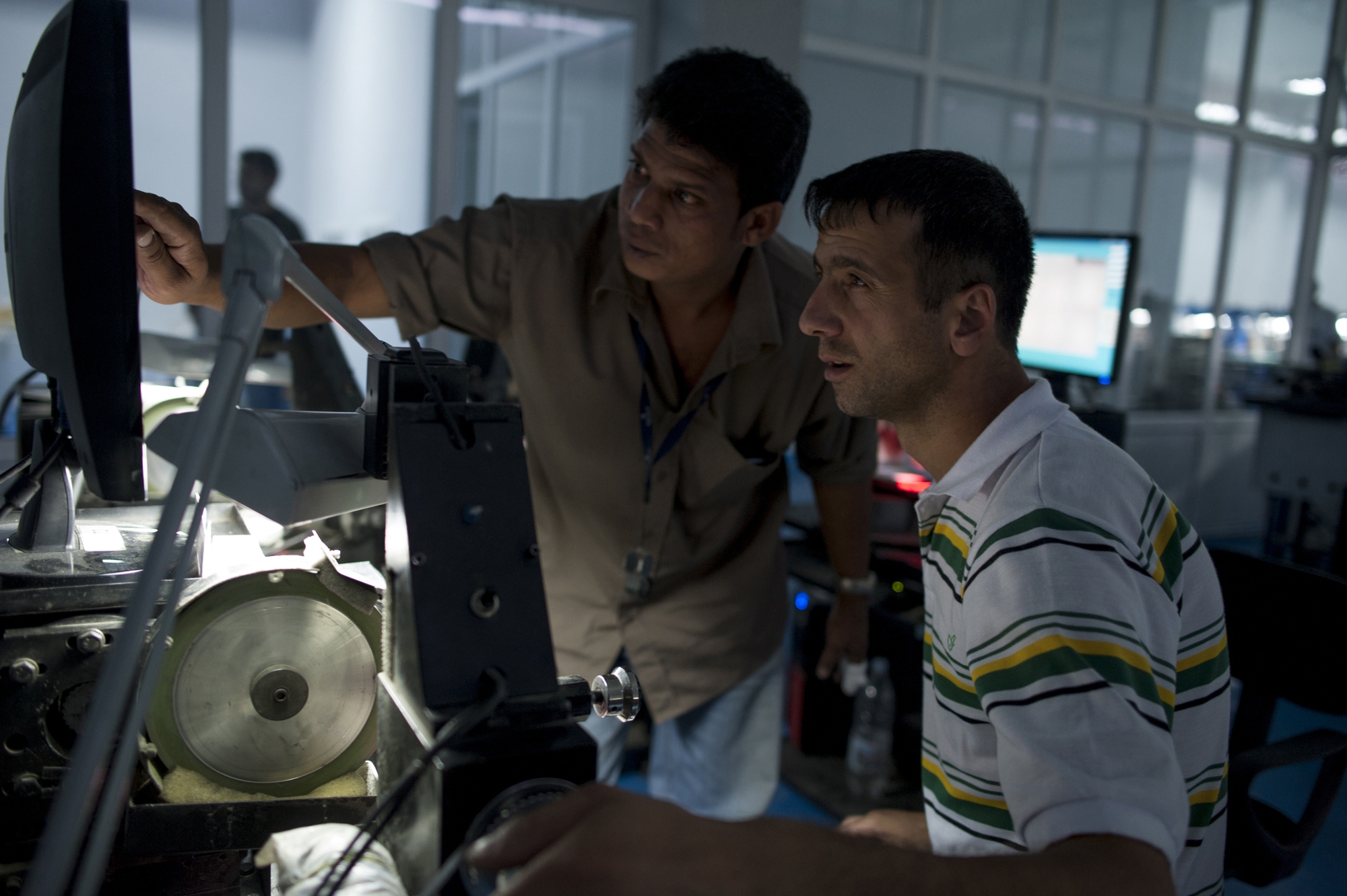 Indians and Armenians work side by side at Dimotech. 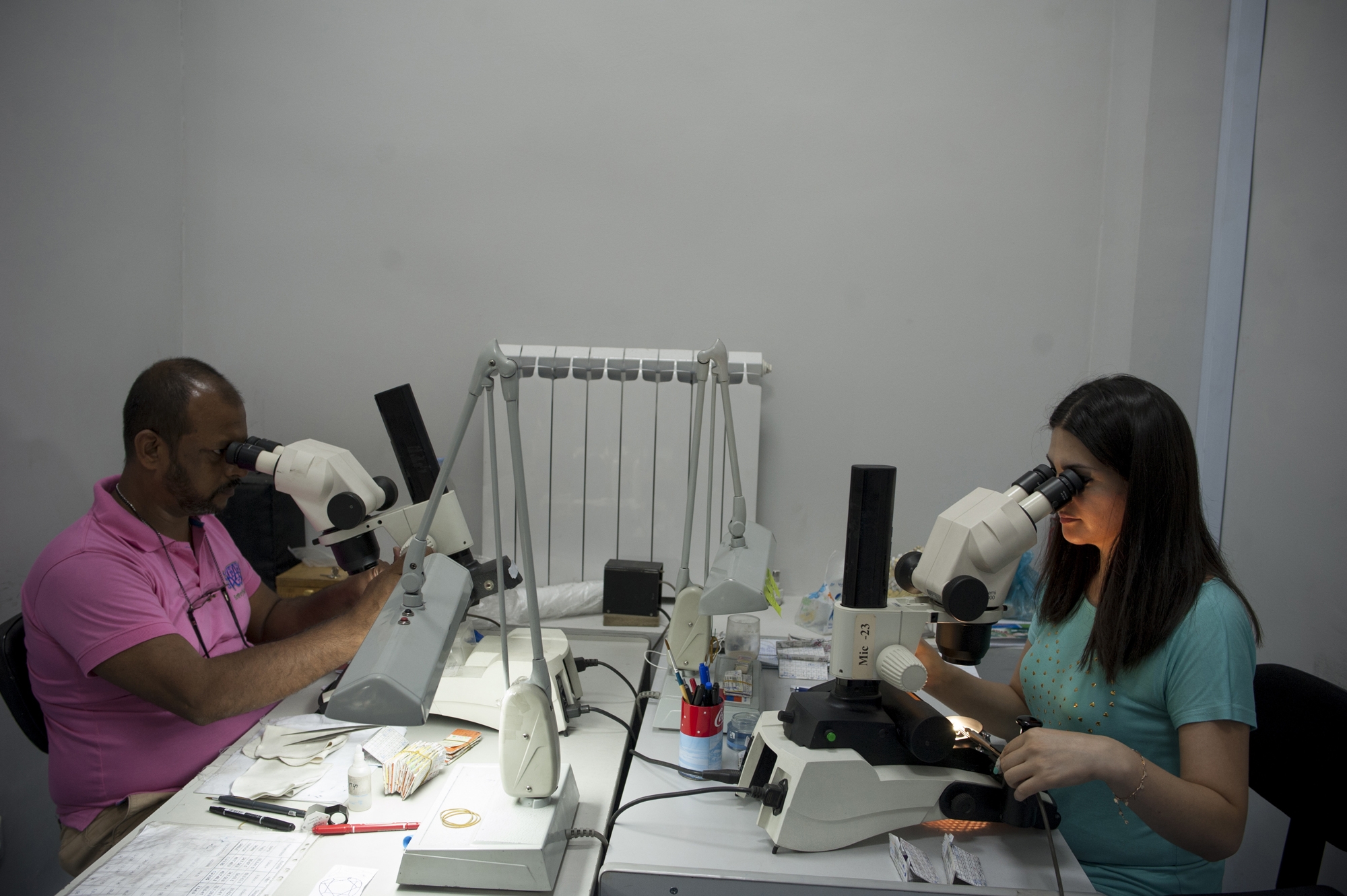 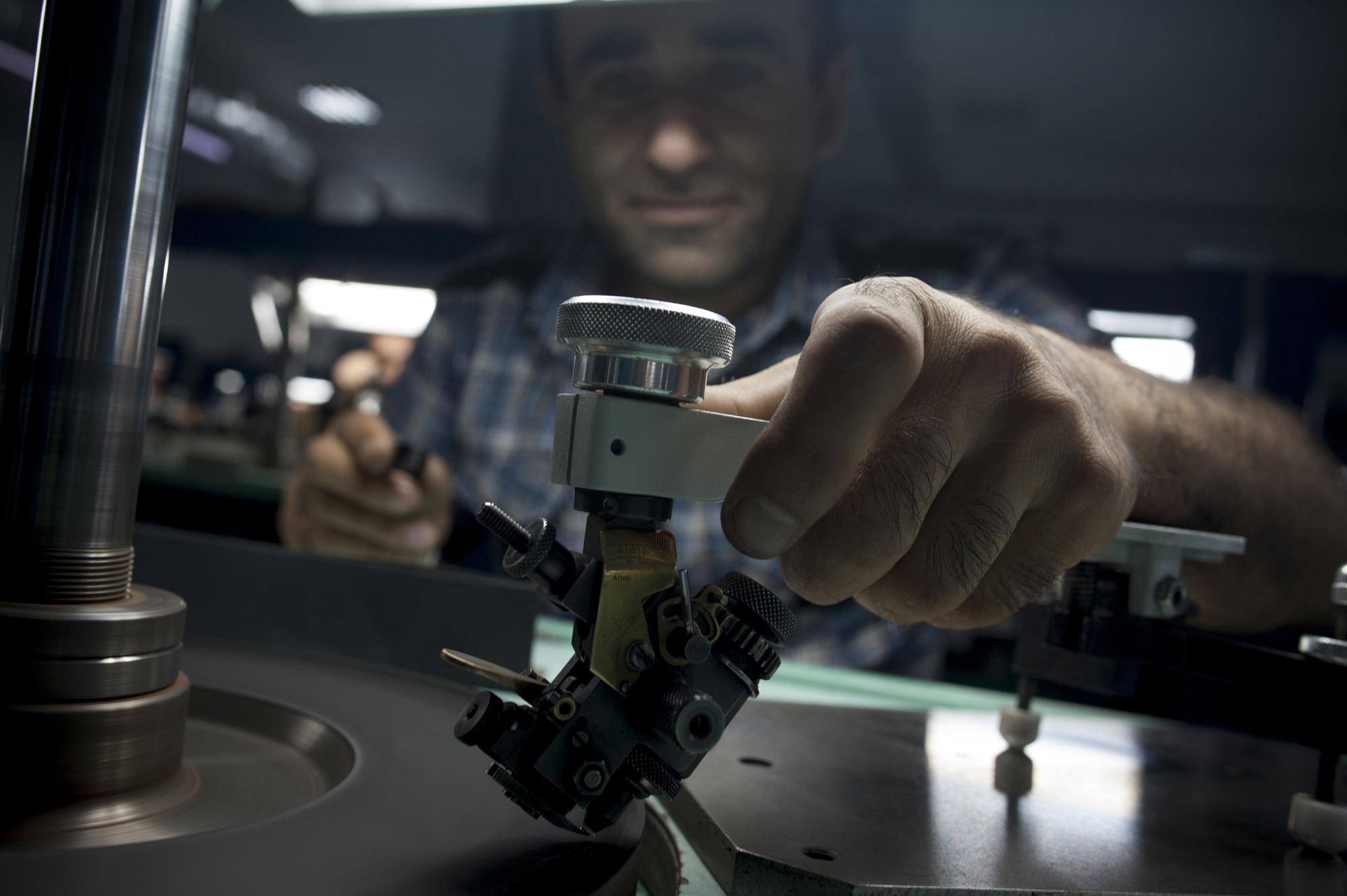 A polisher adjusts his machinery before starting on a new rough diamond.
prev
next

About half of Alrosa’s yearly sales occur through the international diamond market in Antwerp, Belgium, a member of the EU. Although the company, which accounts for the bulk of Russia’s diamond mining, does not yet feature on a sanctions list for Russian actions in Ukraine, it has stated that it has begun to work “out some options for reducing this risk;” namely, by increasing sales to clients “in other jurisdictions.”

Enter Armenia. Once the center of the Soviet Union’s diamond-refining operations, the South-Caucasus country today counts on exports of refined diamonds for about 10 percent of its total annual volume of approximately $1 billion in exports. That share has slumped dramatically over the past decade from a peak of 40 percent in the early 2000’s (diamond exports peaked at $327 million in 2003), but Armenian refiners see the diamond agreement with Russia as a way for the sector to regain its financial sparkle.

“This is a great opportunity,” Edgar Hovhannisian, the general director of Dimotech, an Armenian refining factory owned by Antwerp -based Rosy Blue, one of the world’s top diamond manufacturers. “We are expanding, [and] have ordered a half a million dollars’ worth of machines in anticipation of a higher volume of production.”

Under the terms of the agreement, ratified in late June, Armenian importers would be able to purchase an unlimited amount of rough diamonds from Russia without paying the usual 6.5-percent duty. Armenian President Serzh Sargsyan and Russian President Vladimir Putin signed the deal last December, before the Ukrainian crisis erupted. It is not contingent upon Armenia finally joining Putin’s trade club, the Eurasian Union.

To encourage things along, the Armenian government has dropped its 20-percent Value Added Tax on imported diamonds.

But the agreement with Moscow is not all glitter, critics warn. It effectively strengthens Armenia’s economic dependence on Russia; if Armenia joins the Union -- the most recent projected date is this October – its refiners will have to pay an 18-percent duty on rough diamonds imported from outside countries, which may sell diamonds for lower prices.

Diamond refiners in the village of Nor Hatchn, the hub of Armenia’s diamond operations, about 60 kilometers north of the capital, Yerevan, see no problems with the deal, however. Only 20 of the 200-some diamond workshops that existed in Nor Hatchn during the early post-Soviet period still function today.

Dimotech, which employs 150 diamond workers, has opened a second factory in Armenia, and brought back ten artisans who left Armenia after the 2008 global financial crisis, when demand for refined diamonds slumped.

“Presently, a lot of the workshops [in Nor Hatchn] are non-functional, but I think many foreign investors would be attracted by the Russian rough diamonds; especially now that access to Russian raw materials will be getting harder for European manufacturers,” predicted Nugara.

A similar diamond deal with Russia coincided with the peak in Armenia’s diamond sector in the late 1990's and early 2000's, when Antwerp-based Taché and Israeli diamond magnate Lev Levaev came to invest, and the country churned out annually between 200,000 to 370,000 carats of refined diamonds, according to official data.

Alrosa, though, has termed the discussion of possible EU sanctions “purely speculative.”  Nonetheless, as the Weekly Rapaport Report, a diamond-industry publication, has noted, it has begun to seek “alternative methods and markets for selling its diamonds;” most recently, by expanding exports to India, the company’s second largest market after Antwerp.

But not all experts share the optimism that Armenia will enjoy a diamond comeback as a result of its access to duty-free Alrosa diamonds.

For one, there’s the competition. Armenia does not rank among the top markets for Alrosa roughs. Drawing on Armenia’s traditional expertise in working with jewelry, the country’s hand-cut, refined diamonds have received industry certifications of excellence, but Dimotech’s Hovhannisian concedes that “Indians and the Chinese are... technologically more advanced.”

Concerns also exist about the fact that Russia does not allow Armenia to re-export the small, rough diamonds which can be included in a purchased batch and which are not considered cost-effective to refine.

Armen Yeganian, head of the Ministry of Economy’s industrial-policy department, told EurasiaNet.org, however, that the government is now negotiating with Moscow “to have the ban lifted.”

Kamo Dallakian, the director of Agates Company, a 10-person, Armenian-owned operation, reported no restrictions on a recent shopping trip to Moscow, however. “We were granted the opportunity of a large selection,” Dallakian told EurasiaNet.org. The company already has exported its first batch of polished stones from the purchased rough Russian diamonds.

Like other interviewed companies, Agates is planning to expand in anticipation of outside demand for refined Russian diamonds.

Yerevan State University of Economics’ economist Ashot Yeghiazarian cautions, however, that “it cannot be ruled out that cooperation with [Alrosa] poses a serious risk.”

For now, though, it appears to be a risk that Armenia is willing to take.

Gayane Abrahamyan is a freelance reporter and editor in Yerevan. Nazik Armanakyan is a photojournalist working for Armenianow.com.