Armenia: How Welcoming Will Be the EU’s Embrace? 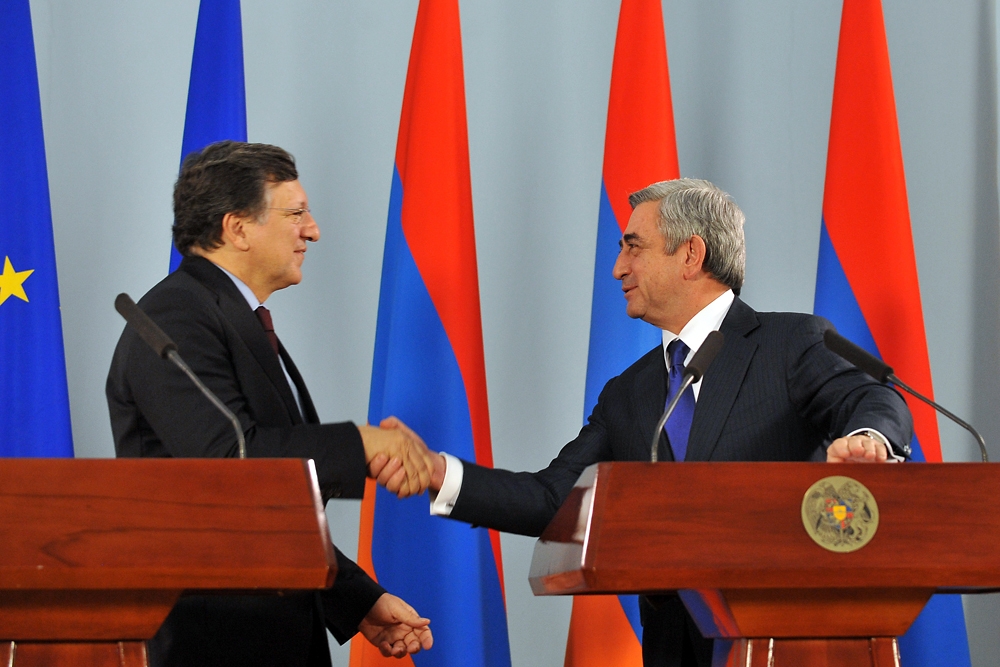 The EU and Armenia are get closer, but illegal migration remains a growing concern. (Photo: EU)

The European Union is indicating a willingness to explore an Association Agreement with Armenia.  But even as it raises the possibility of closer ties with this cash-poor South Caucasus state, Brussels appears eager to stem the westward flow of illegal Armenian migrants.

Official data, which many Armenians view skeptically, reports that 49,660 citizens left Armenia permanently in 2012, and that number shows little change from 2011. From 2005-2012, 204,000 people left Armenia for good, according to the National Statistical Service. The number accounts for just under 10 percent of the country’s 2012 population of 2.97 million people. Observers believe the actual number of émigrés to be much higher than the official figure.

With a large ethnic Armenian community, EU member-state France, in particular, attracts many migrants. A 2012 report by UNHCR, the United Nations refugee agency, reported that the number of Armenians applying for a French residence permit increased by 8 percent between 2010 and 2011 to 52,100 claims. Armenia ranks third overall for such requests, after Russia and the Democratic Republic of Congo. The report linked the increase to a more than two-fold rise in the number of Armenians requesting political asylum.

The number of Armenians moving to fellow EU states Austria, Germany and Poland also has increased.

While receptive to legal immigration, the EU, already struggling to accommodate its roster of 27 member-countries, is not taking a laissez-faire attitude toward all forms of migration. An aggressive crackdown launched by EU border forces resulted in a 49-percent reduction in illegal migration over the past two years, according to official data.

Keeping those numbers down involves encouraging potential migrants to stay put, and showing potential high-volume source countries how to avoid the negative impacts of migration.

In Armenia, the EU currently spends over 9.71 million euros (roughly $12.85 million) on seven migration programs, ranging from a 1-million-euro (roughly $1.3 million) project via the United Nations Children's Fund to focus on “social problems faced by migrants,” to support for the Armenian State Migration Board for “strengthening migration management.”

But whether such programs are having the desired impact is unclear. Among 12 former Soviet republics recently surveyed by the Gallup International Association, Armenians ranked as the most eager to migrate; some 40 percent of some 40,000 respondents interviewed said they would like to move to another country.

Many Armenian migrants who, by hook or by crook, found work within the EU say they have no intention of returning home. “Why would I go back to Armenia? … There are no jobs and no hope there,” commented the father of a two-child family who settled five years ago in a small town in France. “Here, at least, I know that my children are safe and the state will support us when necessary. We don’t feel neglected here, and we are aware of what is going on in Armenia now.”

Improved living conditions, hopes for a better future for their children and a desire for a stronger defense of their civil rights were among the key reasons for emigration cited by respondents in the Gallup poll.

To many would-be émigrés, deception justifies achieving those goals. After being denied a residence permit in Austria, the family above invented new names and moved to France, where they managed to trick officials into believing that their lives were at risk in Armenia. In a common dodge, they alleged that the family’s mother is an ethnic Azeri who risks being abused for the 25-year conflict with Azerbaijan over Nagorno-Karabakh.
To avoid such situations, some specialists emphasize the need to tie potential migrants to their home communities. An EU-financed UNICEF program, launched in April, seeks to do that by “provision of tailored social services and the best use of migrants’ financial and intellectual resources in the development of their communities of origin” in four regions – Lori, Tavoush, Gegharkunik and Shirak. Further details were not available.

Some Armenian analysts, though, do not believe such programs will work. Armenian Center for National and Strategic Studies Research Director Manvel Sarksian commented that “it is hard to say how efficient these programs will prove, given the people’s mood.”

“These programs are like minor patches that do not solve any problems,” argued independent political analyst Yerevand Bozoian. “If the EU wants to have real changes, it should help Armenia change the social and political situation.”  That “situation” erupted after this February’s presidential elections, when hundreds of people, angry at perceived election corruption and hard-pressed for cash, took to the streets to protest the results.

At a March 18 meeting with media, President Serzh Sargsyan blamed the problem of emigration on Armenians’ alleged refusal to recognize their successes. He criticized media outlets for “talking about the very worst [things]” and “only blackening the picture.”

Galust Sahakian, head of the ruling Republican Party of Armenia’s parliamentary faction, agreed, claiming that the complaints are tied to election-year politics, and “create a deceptive atmosphere.”

The government insists it is aware of the scope of the problem. In 2013, it allocated 13 million drams ($31,159) for a migration study, said Gagik Yeganian, head of the Migration and Refugees Department. An assessment, expected by the end of the year, will focus on population movement since 2008, the reasons for migration and the countries of destination, he said.

Ethnographer Hranush Kharatian, a former government official now critical of the Sargsyan administration, insists  that people often emigrate for the simple reason that they do not sense their futures in Armenia are secure.

“People will stay in Armenia if they get the chance to manage their own activities, and if they have faith they will be able to do so,” said Kharatian.