Armenia: Is the Government Taking Aim at the Wrong People? 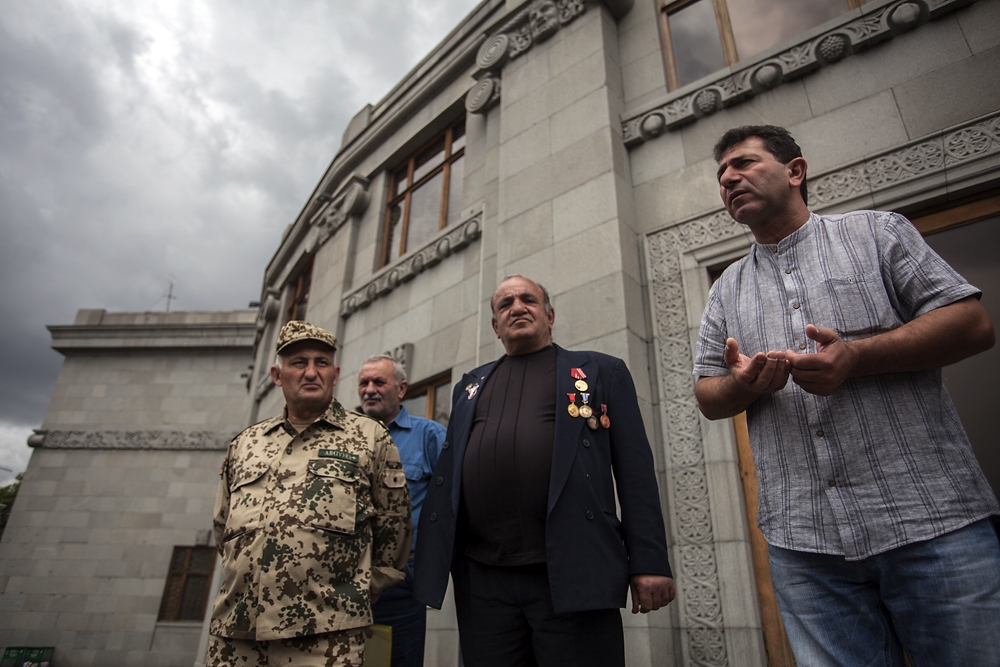 In what many local observers see as the latest in a series of pushbacks against government critics in Armenia, military investigators have filed criminal charges against Volodya Avetisian, a retired army colonel who launched a series of protests this spring for better benefits for Nagorno-Karabakh war veterans.

The protests led by Avetisian were not as large as this July’s public-transportation boycott, not as controversial as the outcry against the Customs Union, and did not threaten to spill over into the regions, as did opposition leader Raffi Hovhannisian’s short-lived Barevolution (Hello Revolution) this February.

But his case carries particular sensitivity, both political and social. Karabakh war veterans enjoy an honored position within Armenian society for their military success in the Karabakh conflict against Azerbaijan. As such, trying to criticize or punish veterans has been generally deemed risky, if not taboo. Both President Serzh Sargsyan and Defense Minister Seyran Ohanian are also veterans of the 1988-1994 conflict; Sargsyan himself served as a leader of Karabakh’s defense forces.

Fifty-year-old Avetisian and the hundreds of veterans who joined his Yerevan protests argue that that the government should show appreciation of their efforts with more than just words. Receiving pensions of just 30,000 and 80,000 drams (around $73-$193) per month, they argue that veteran benefits need to be codified in law. They also contend that their benefits should be expanded; not only should they receive more in pension payments, but they also deserve discounts on utility bills, medical fees, public transportation fares and tuition costs for their children.

Defense Ministry officials at first were solicitous toward Avetisian and his fellow protesters. But their interest vanished, participants say, when Avetisian was jailed on September 20, pending trial, on charges of supposedly taking $2,000 from a man (identified only as H. Zakarian) in return for a promise to obtain a military-service exemption for the supposed “fee”-payer’s grandson. The potential penalty is a fine from between 500,000 ($1,230) to 1 million ($2,470) drams, or a prison-term of up to five years.

Avetisian maintains his innocence and has refused to testify, said his attorney, Ara Zakarian. He added that both Avetisian and he are “trying to understand on what grounds they took him into custody, because so far [the evidence] is rather vague and baseless.”
Avetisian’s wife, Margarita Baghramian, told EurasiaNet.org that her husband was taken from his house late at night by military police without the reason for his detention being given.

An amnesty bill now under consideration in parliament could secure Avetisian’s release from custody, but the charge would remain on the ex-serviceman’s record, according to Zakarian.

The news has done nothing to change his supporters’ perceptions that top government officials have simply run out of patience for protests, and are not treating the protesting veterans fairly. That perception is fueled in part by the fact that since August 22, nine activists engaged in protests against an increase in city bus fares and against Armenia’s planned Customs Union with Russia have suffered injuries from street attacks by unknown assailants.

Some argue that Avetisian should go to trial to prove he’s the target of a setup. “The authorities, seeing that we were not going to give up, tried this way to discredit a person whose whole life, youth, and health have been devoted to his motherland,” argued Karen Melikbekian, who, along with several fellow veterans, is continuing a sit-in protest in the park near the government chancellery in Yerevan. “This is the lowest thing they could have done.”

“The refusal to release him on bail when he is not a dangerous criminal or a murderer makes the motives behind Volodya’s arrest obvious,” said another protester, veteran Tigran Harutiunian. “He had to be isolated; also, as a message that if we do not stop our protest, they will cook up charges against all of us, one by one.”

Another supporter, Zhirayr Sefilian, a former special division commander, claims that he has information about government officials who, allegedly, “were trying to bribe Avetisian to have him stop his protest.” He has threatened to disclose their names if the case against Avetisian continues. He declined to elaborate to EurasiaNet.org.

The Defense Ministry’s Investigative Service, which oversees the case, has declined to comment on the charges against Avetisian, saying that “The case is under preliminary investigation and any comment might affect the process.”

The veterans, though, are not alone in their suspicions about the charges. “Looking at the general situation taking place in the country, the recent beatings of activists, it is rather difficult to observe Avetisian’s case only in the legal context, “ said political analyst Edgar Vardanian of the Armenian Center for Strategic and International Studies. “[I]t is obvious that this case is also politically motivated.”

One human-rights activist agrees. “Assaulting war veterans in the street, as in the case with the activists, would have been too obscene a deed; hence, they found another method to silence [a person], to scare him off,” alleged Avetik Ishkhanian, director of the non-profit Armenian Helsinki Committee.

Neither representatives of the government nor the governing Republican Party of Armenia have commented publicly on the allegations of a political motivation to the case. A vexed Avetisian asserted on September 30 that the veterans would now switch from social to political demands. “I have realized that what today is called a state is, in reality, a system robbing our people and destroying our statehood,” he wrote in a statement from prison. “It is like a man cutting down the tree branch on which he is sitting. If he is not restrained, all of us will collapse together.”