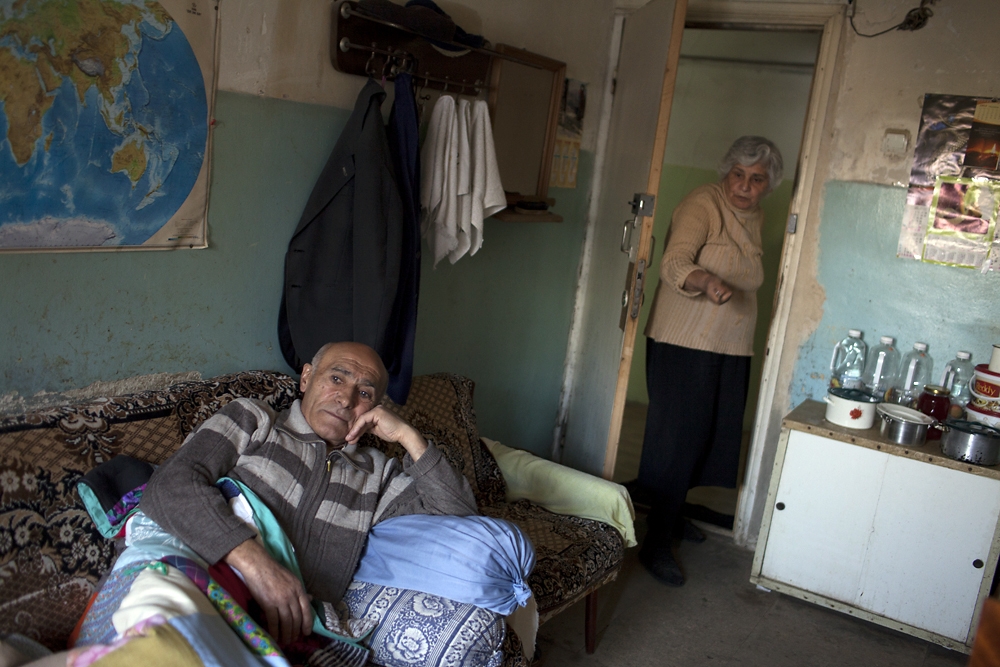 Donik Arzumanian (left), a former oil worker, and Emma Mirzoyan are both refugees from Baku living in a dormitory in Yerevan. 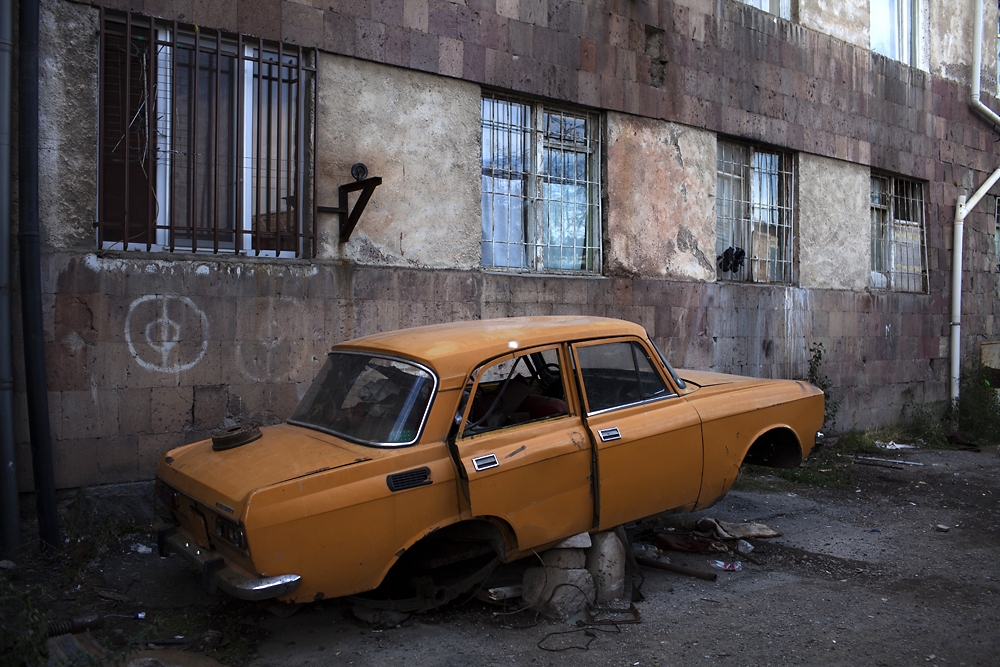 Many refugees and IDPs living in Armenia complain of being forgotten and neglected. 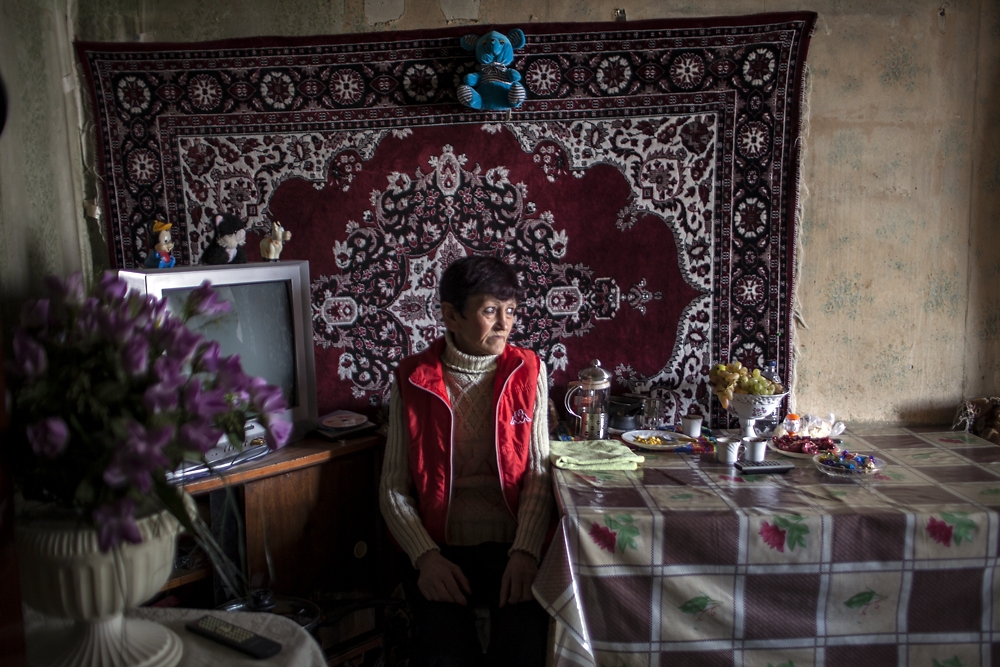 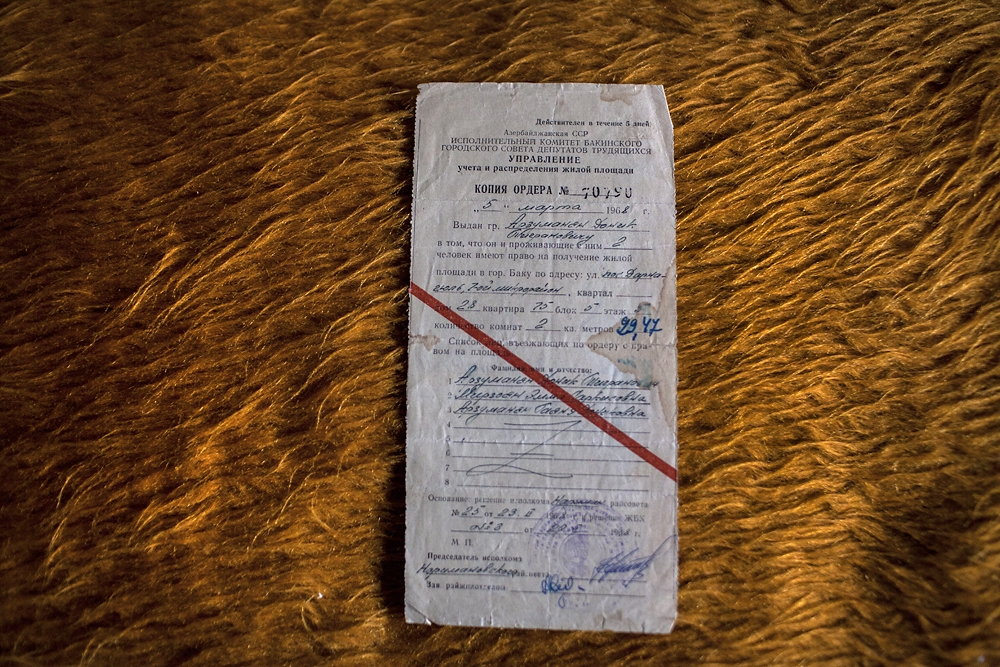 Many of the Armenian refugees have kept documents, including apartment titles, as reminders of their lives in Azerbaijan. 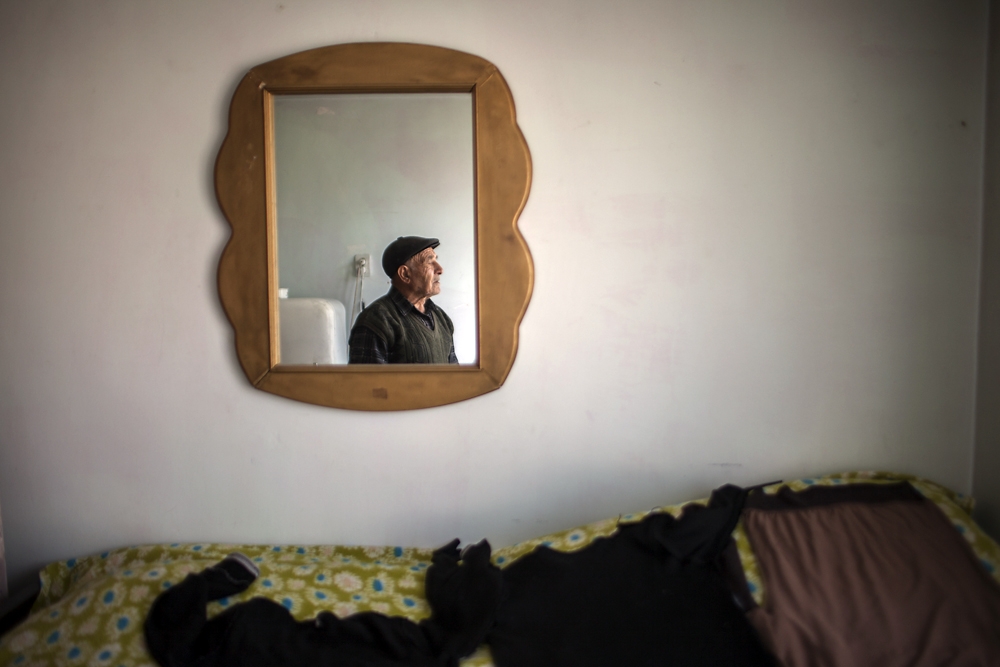 "I was keeping all of the documents from the house we left in my pocket for years," Boris Esayan says. 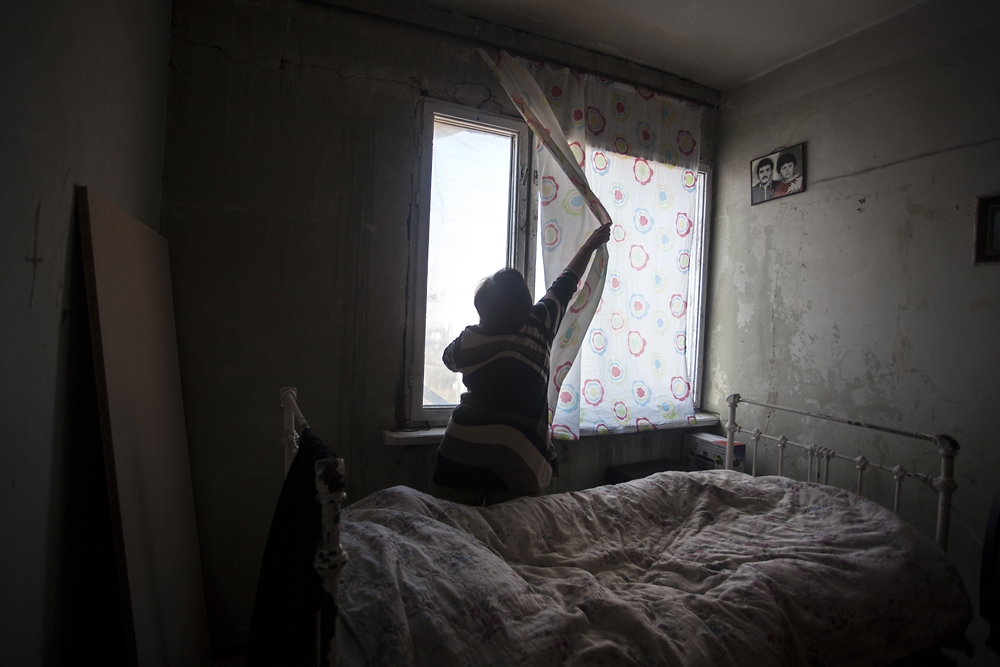 Greta Dallaqian fled Kirovabad in 1988, when the Azerbaijani population forcibly moved Armenians out of the city and region. 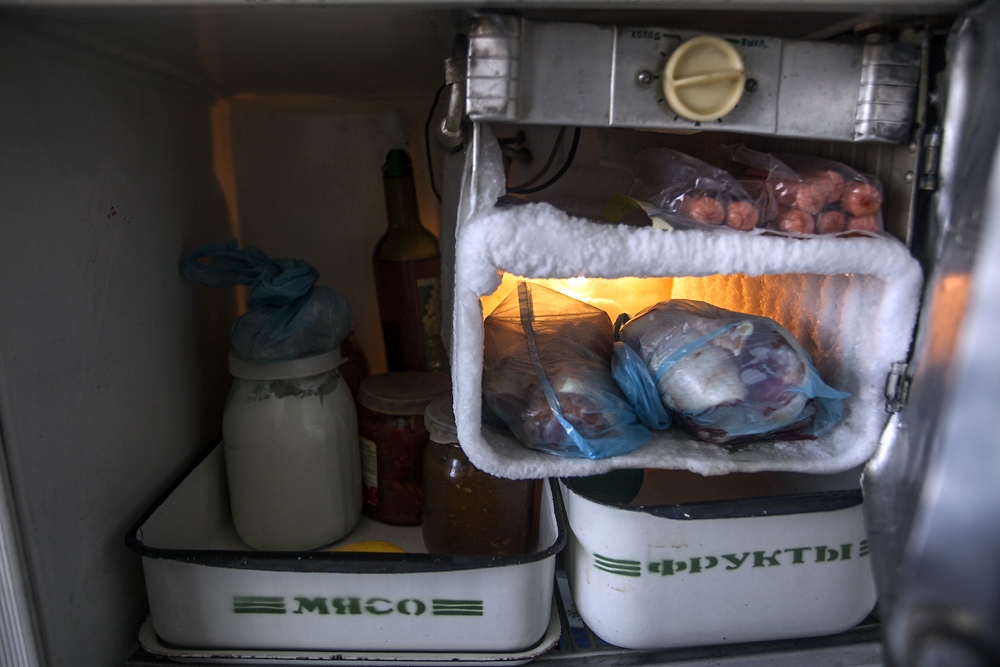 The dormitories for IDPs in Abovian, 16 kilometers from Yerevan, do not have indoor bathrooms or toilets. 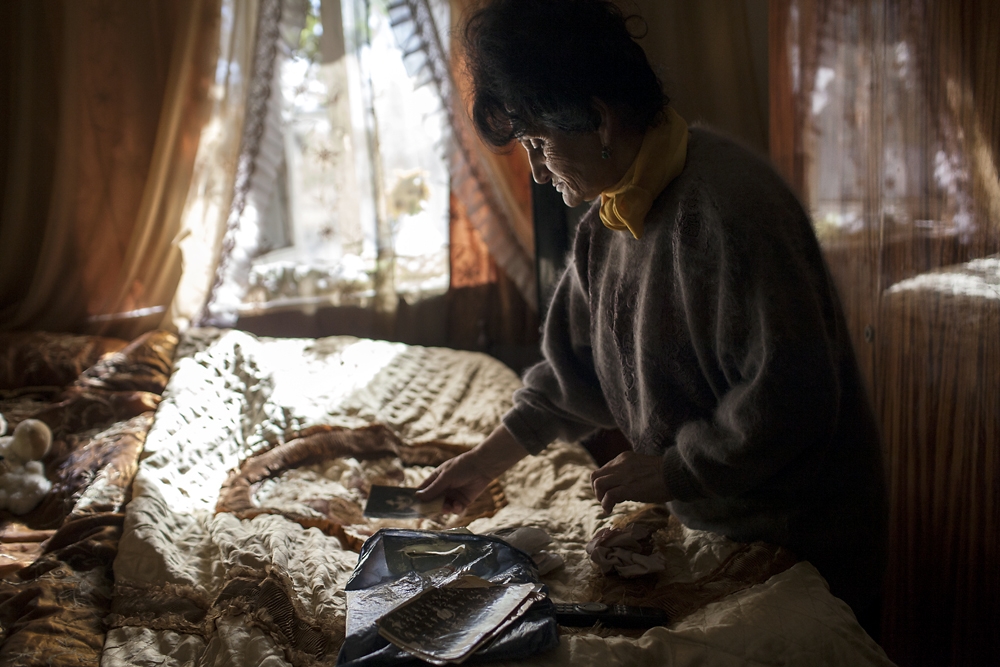 Emma Abrahamyan (no relation to author) who fled Baku in 1988 first for Gyumri and then Yerevan, reviews some of her mementoes. 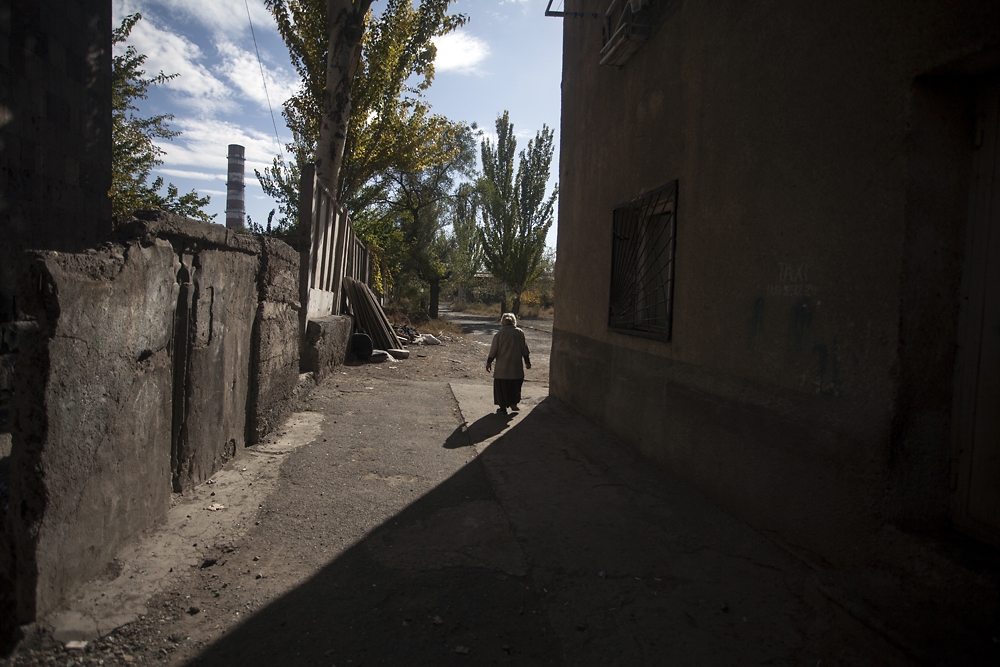 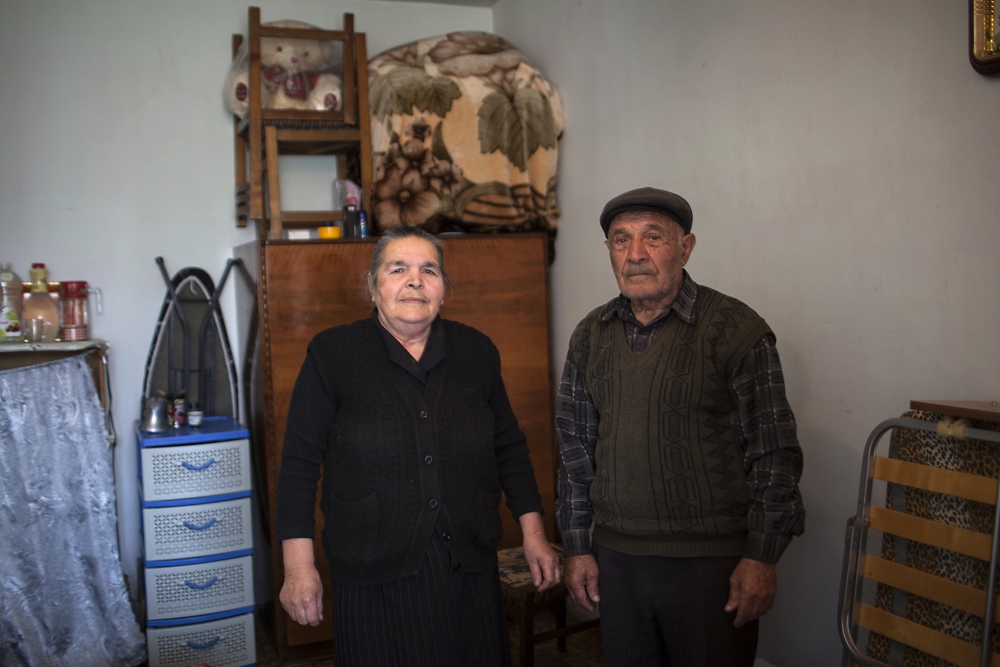 Boris (right) and Margo Esayan, refugees from Shahumian, live with one of their five sons in a single dorm room. 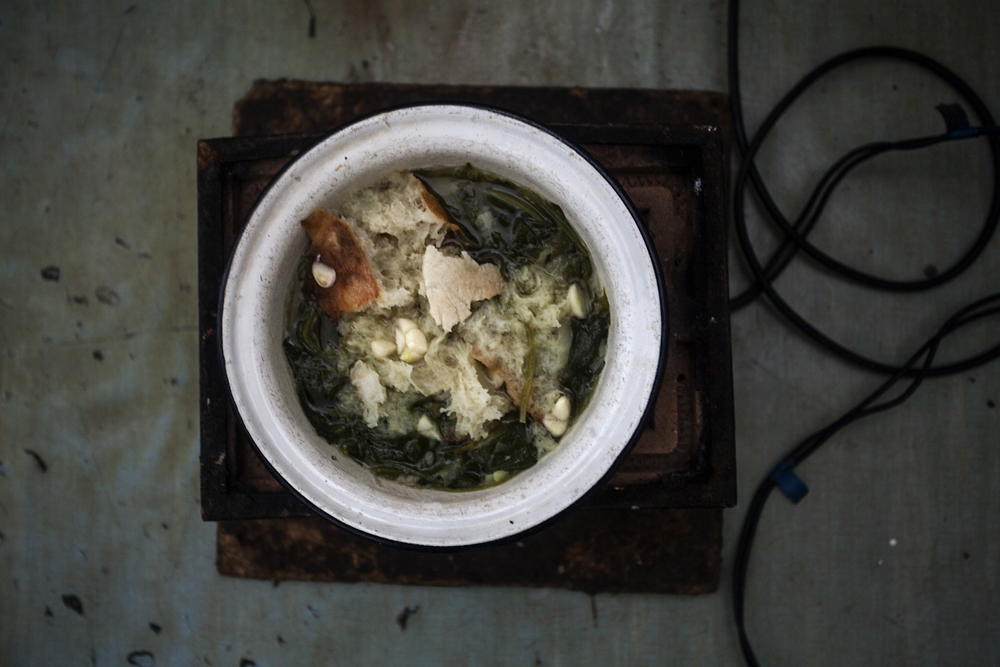 Food is kept warm on a hot plate in a refugee dorm room in Abovian. 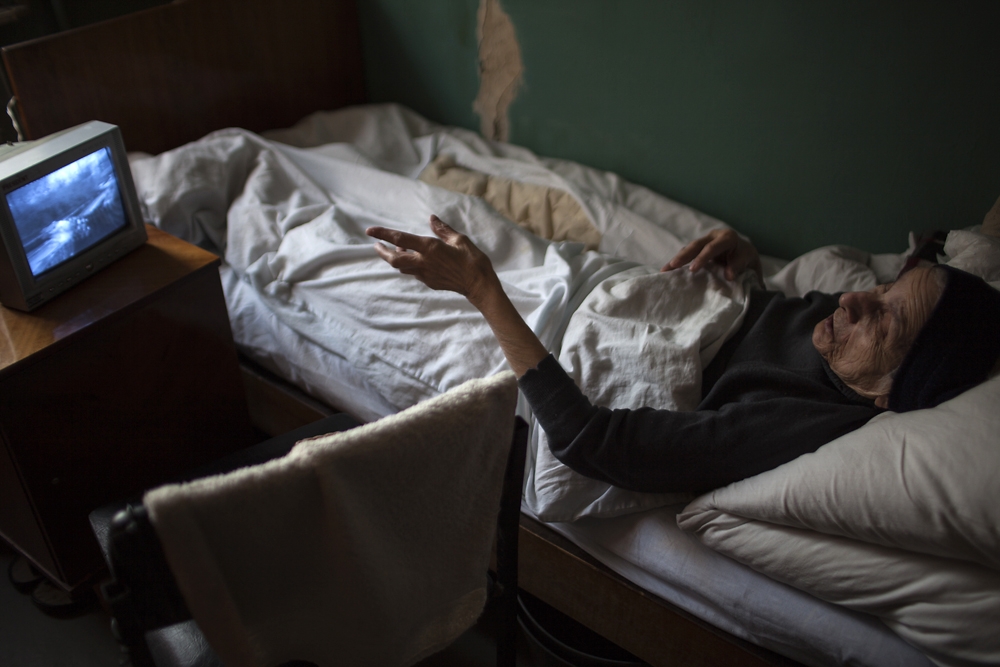 Seda Melkumian, who was born in 1926 in Kislovodsk, lives in a single room and is cared for by neighbors because she is blind. 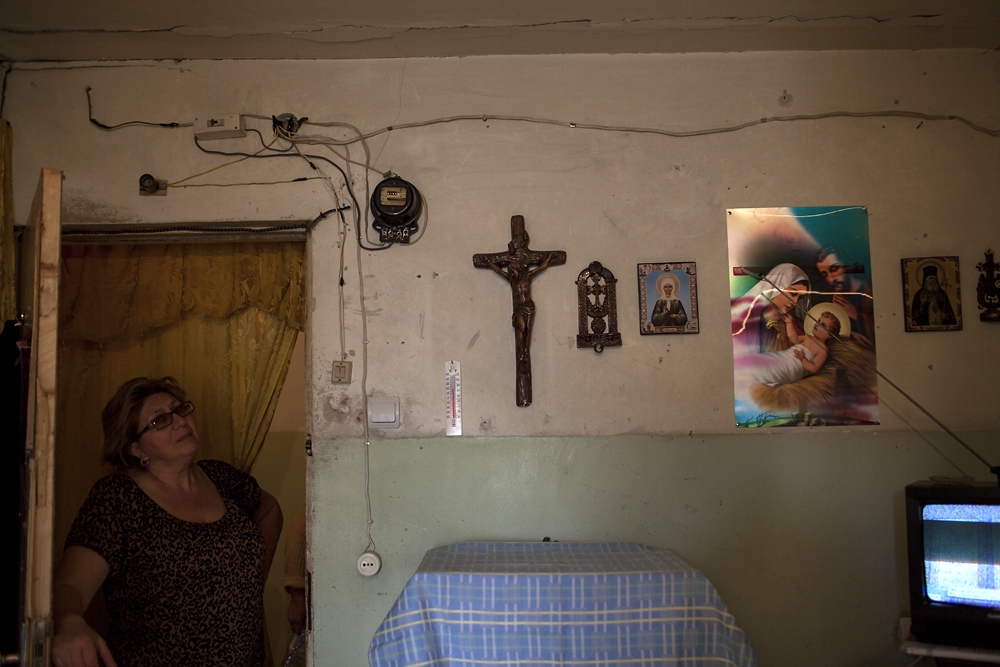 A refugee from Azerbaijan surveys the ceiling damage to her dorm room. 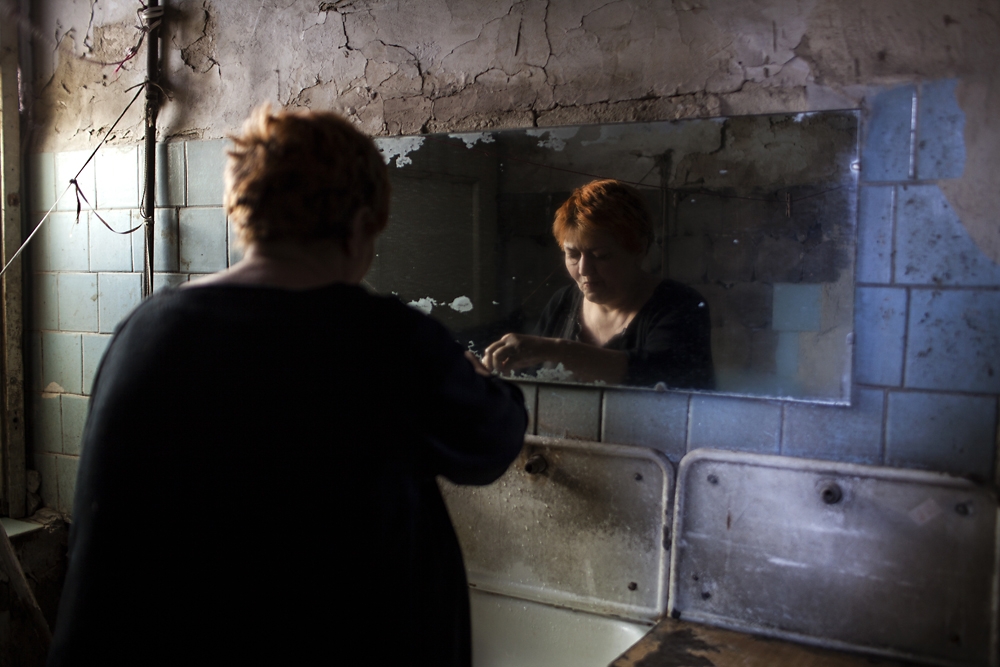 Lyudmila Abrahamyan (no relation to author) washes up in a shared bathroom in a building of dorm rooms for refugees. 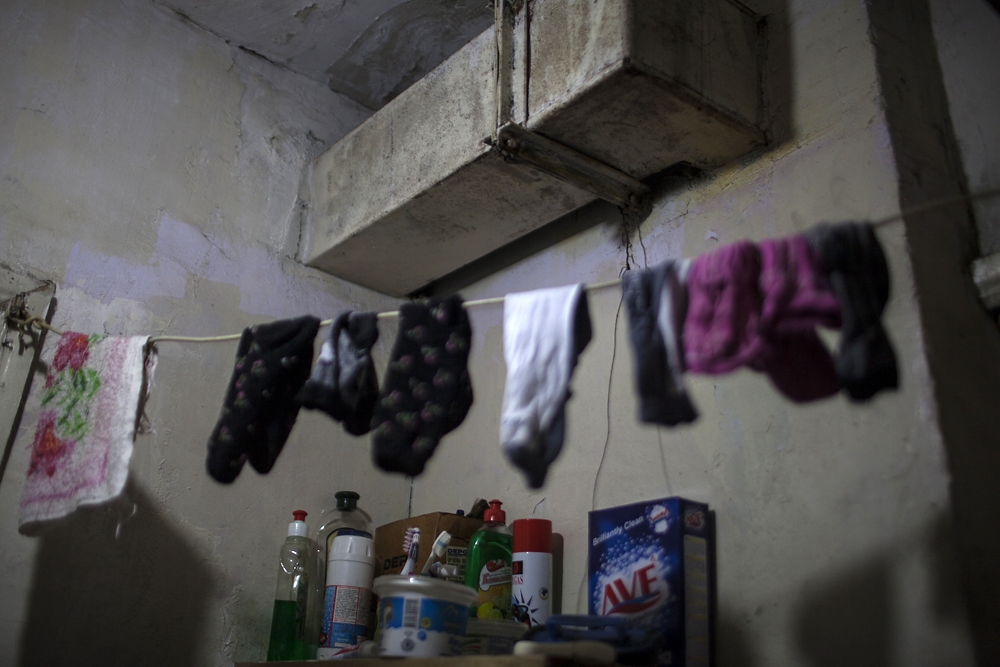 Because of the deportations and the war, about 14 percent of Armenia’s population were displaced people in the late 1980s. 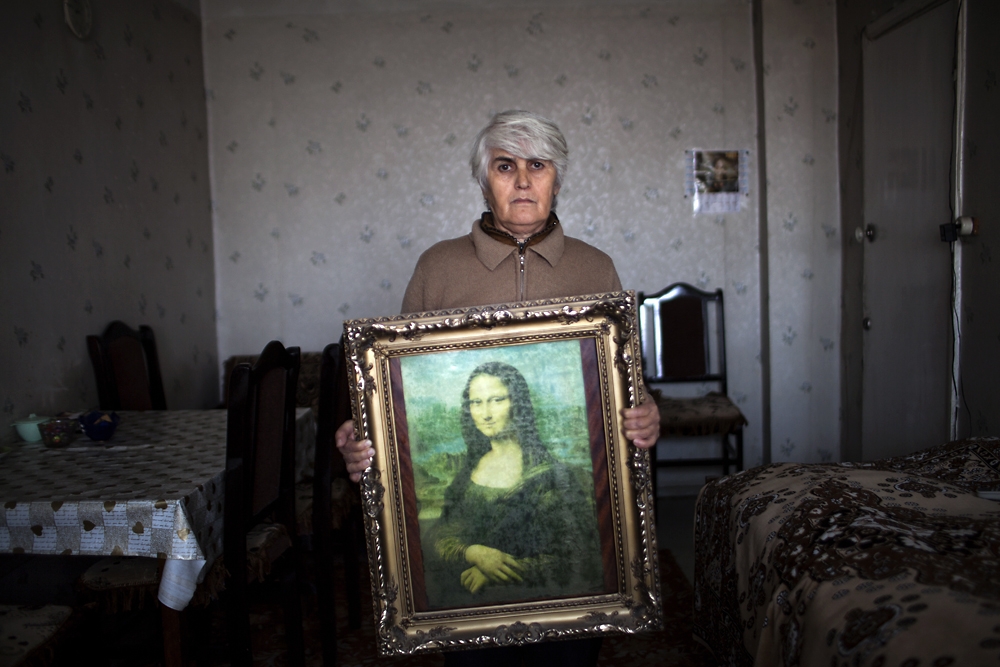 Nakhshun Gasparova shows one of the few things she took with her when she fled from her house in Gandzak.
prev
next

When Mariam Avanesian and her family fled to Yerevan from Azerbaijan 25 years ago this month, they thought they were lucky; they had escaped physical danger, and left behind an apartment rather than “a grave” in the Azerbaijani capital, Baku. But moving to Armenia didn’t mean the end of uncertainty for Avanesian’s family members, and tens of thousands of others.

Many of those who escaped turmoil in Azerbaijan over two decades ago have struggled to find a sense of equilibrium since then. In the Avanesians’ case, roughly a month after they arrived at a camp for displaced persons in the northern Armenian city of Vanadzor, the devastating 1988 Spitak earthquake struck. The quake left 25,000 people in the area dead, including the Avanesians’ seven-year-old son, Vadim.

Things didn’t get much better, financially, after that tragedy. For the past two-and-a-half decades, the Avanesians – now a family of 10, including four grandchildren, two surviving sons and their spouses -- have lived in two rooms in the basement of a building in the village of Kasakh, 11 kilometers outside of Yerevan. Inside, the powerful stench of sewage water permeates a pitch-black corridor frequented by rats. The damp, concrete-floored rooms where they live have no kitchen appliances, no toilet and no bathing facilities apart from a bathtub in one room. Armenia’s Soviet-era government gave the family the basement as a residence after the Spitak earthquake.

“There is no alternative. We either have to live in the streets or here, but my grandchildren can no longer stand this,” a frustrated Avanesian said. She believes the surroundings have affected her three-year-old granddaughter, who, she claimed, does not speak and “starts screaming with terror” when she steps into the corridor.

The 57-year-old Avanesian earns a meager wage as an office cleaner. Like many other displaced Armenians, Avanesian blames the government for her family’s lot. Along with what one son earns as a soldier, their monthly income is roughly 160,000 drams ($393).

According to the State Migration Service, between 1988 and 1992, an estimated 360,000 Armenians were forced to leave Azerbaijan, and 72,000 more fled their homes situated along the Armenian border with Azerbaijan. The influx made up roughly 14 percent of the country’s population in the late 1980s.

“Years ago, at least they remembered us and paid occasional visits,” Avanesian said, referring social workers from both the government and international organizations, “but now they have forgotten all about our existence.” Armenian law does not require visits by social workers.

The Migration Service today has no budget for programs to assist those uprooted by 1988-1994 Karabakh conflict. Amid widespread allegations of mismanagement, a program that provided displaced persons with apartments was suspended in 2010.

Officials maintain that the government has done “even the impossible” to “integrate and support the refugees” in Armenian society. “Many of the refugees fled [Azerbaijan] in whatever clothes they were wearing at the moment -- slippers and robes, and they not only needed shelters, but also essentials,” said State Migration Service Director Gagik Yeganian to EurasiaNet.org. “The country was facing a titanic challenge; especially given the earthquake, which followed shortly after the [1988] Sumgait and Baku pogroms [of ethnic Armenians], left more than half a million people homeless.”

At first, refugees were mostly placed in hotels, resorts and camps in Yerevan and the regions. Later, with financial support from the United Nations and other international organizations, some 4,000 residential buildings were built. Between 2004 and 2010, the government distributed vouchers to 1,100 refugees and Internally Displaced Persons for the purchase of apartments. The program cost the government, according to Yeganian, between “$4 million to $5 million.”

Yeganian blames the 2009 global financial crisis for the decision to discontinue the housing program. Government-funded classes to train refugees to become hair-stylists, manicure-pedicurists and to arrange flowers – occupations often in demand for women – and to teach basic computer skills also have stopped.

Local and international non-governmental organizations now provide most of the social-welfare assistance to refugees and IDPs. Among the beneficiaries of assistance are the more than 100 refugee families living in a hostel in Abovian, a town 16 kilometers from Yerevan. Two women have managed to earn money as seamstresses for household expenses after Save the Children installed sewing machines and provided a sewing seminar.

The problem of housing, however, far outstrips such earnings. Fifty-eight-year-old Hasmik Martirosian, a refugee from the region of Shahumian, an area now cut in two between Azerbaijani and Karabakhi forces, (the territory under Azerbaijani control is called the Goranboy Region) lives with four family members in an 18-square-meter room, sharing a toilet with a neighbor. She calls her accommodations “a different kind of misery” from the terrors of war, but one that has lasted for 21 years.

Yeganian estimates that it would take $25 million to provide housing for all refugees; funds the government does not have. After dedicating tens of millions of dollars since the 1994 cease-fire, the international community no longer finances housing assistance.

One refugee-rights activist, Eleonora Asatrian, a coordinator for Refugees and International Law, a network of 10 civil-society organizations, believes that what international donors have given should have been sufficient to “have completely and decently resolved the housing issue” by now.

Citing refugee complaints, also made to EurasiaNet.org, Asatrian, a former opposition presidential campaign manager, claims that many people used “fake refugee documents” and paid bribes of between $2,000 to $5,000 to receive vouchers and apartments under the government’s earlier housing scheme. State Migration Service Director Yeganian dismissed such criticism as “routine speculations.”

Eighty-year-old Abovian hostel resident Boris Yesaian has lost trust in official promises. In an inside jacket pocket, he keeps copies of 15 unanswered letters he has sent since 2010 to government representatives and the ownership documents for the two-story house he left behind in Shahumian. He hopes the government will remember him, he said. “At least before I pass away,” he added.