Armenia keeping head down as war in Ukraine rages

Many Armenians sympathize with the Ukrainians under attack, but are tightly bound to Russia and resentful of Ukraine’s long-standing pro-Azerbaijan position on Karabakh. 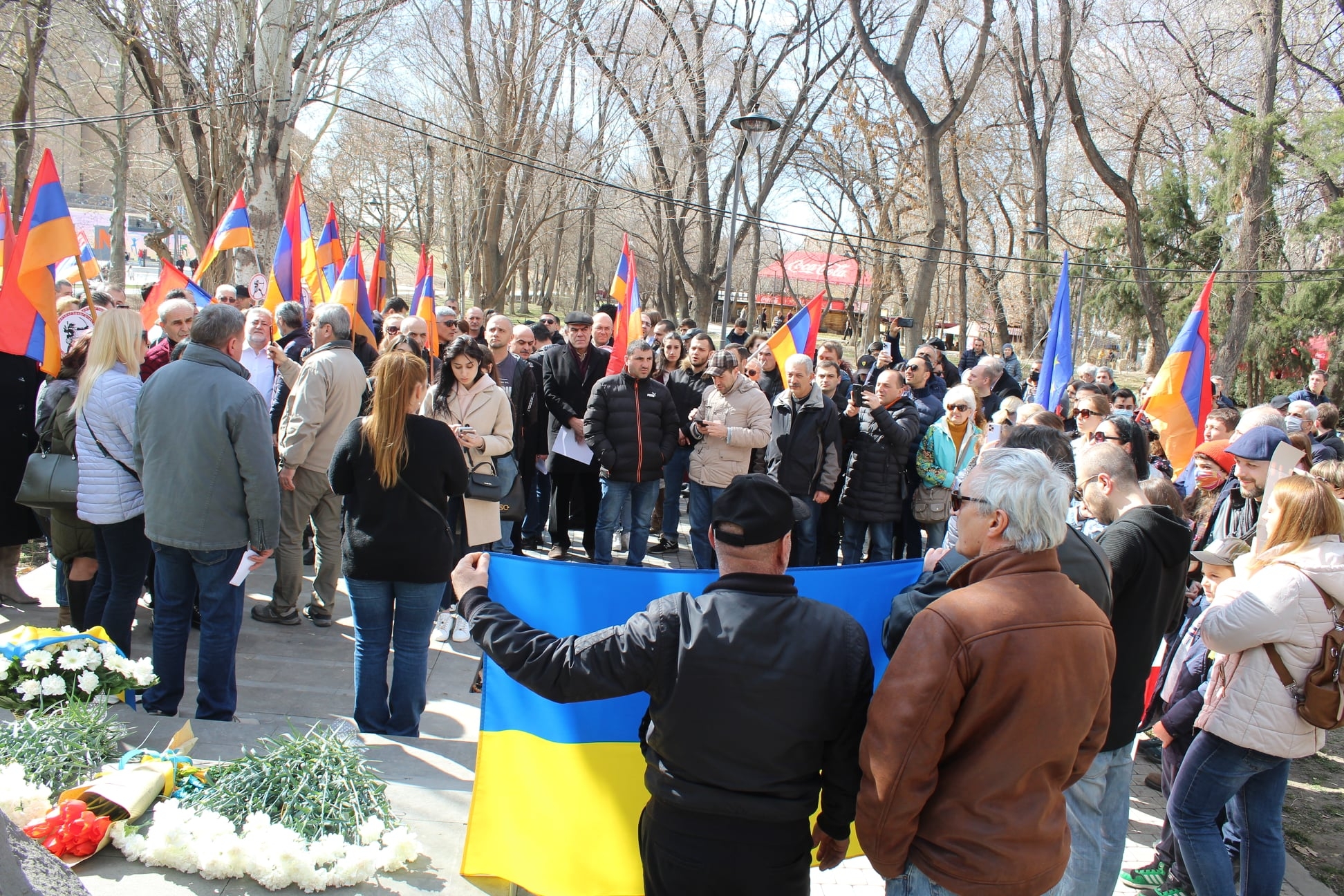 A small rally in Yerevan in support of Ukraine on February 27. (photo: Ukrainian Embassy in Armenia)

Armenia has been keeping a low profile as the war in Ukraine rages, providing diplomatic support to its ally Russia but otherwise largely staying silent.

At a February 26 vote at the Council of Europe on expelling Russia from the organization, Armenia was the only country (other than Russia itself) to vote “no.” In another vote, on February 28 at the United Nations Human Rights Council on holding an urgent debate on the war called by Ukraine, Armenia abstained.

Armenia’s position is largely dictated by its close ties to Russia: It is part of the Russia-led military bloc Collective Security Treaty Organization and hosts a Russian military base. Its borders with Turkey, Iran, and Azerbaijan are guarded by Russian troops. Since 2020, the Armenian population of Nagorno-Karabakh is protected by a 2,000-strong Russian peacekeeping contingent.

The country’s dependence on Russia has only deepened as a result of the 2020 defeat in the war with Azerbaijan, in which Armenians felt abandoned by the rest of the world. As a result many Armenians feel that sovereignty is in short supply these days, and the best option for Armenia is to lay low.

“No realistic response that can come from Armenia would benefit the country. That’s why it’s best to remain silent,” political analyst Areg Kochinyan said during a February 27 program on Public TV, “What Will be the Effects of the Russian-Ukrainian war on Armenia?”

“Although Armenia’s position, as the only other country besides Russia to oppose that move [the vote to expel Russia from the European Council], dangerously isolates Armenia, there was little choice and even less of an alternative,” another political analyst, Richard Giragosian, told OC Media.

But there are limits to that sort of strategic silence, Giragosian said: “Any sense of diplomatic balance may be lost, threatening to push Armenia into a vulnerable and isolated position on the wrong side of history.”

Armenia’s low profile is evidenced by the fact that it is the only South Caucasus country that Ukraine President Volodomyr Zelenskiy has not yet tweeted about since the fighting began. He praised Georgians for coming out in massive numbers to solidarity rallies – and added a dig against the Georgian government, which has also taken a lay-low approach. And Zelenskiy twice praised Azerbaijan for sending humanitarian aid and fuel to Ukraine.

Armenia has taken some steps to push back gently against Russia. Following Russia’s announcement that it would formally recognize the breakaway regions of eastern Ukraine, the Donetsk and Lugansk People’s Republics, Armenia’s foreign ministry suggested that it would not follow suit.

“The recognition of Donetsk and Luhansk isn’t in our agenda,” the ministry said in a February 23 statement urging both sides to find a diplomatic solution. Ukraine’s Chargé d'Affaires in Armenia, Denis Avtonomov, praised the statement: “We feel very positively [regarding Armenia's position]. We are grateful,” Avtonomov said at a press conference. “It is [Armenia]’s sovereign right to make relevant decisions.”

Public opinion has been muted as well. While many Armenians sympathize with Ukrainians, they find it hard to rally around Zelenskiy, who has repeatedly expressed his support for Azerbaijan’s territorial integrity – that is, its right to control the Armenian-populated territory of Nagorno-Karabakh – including during the 2020 war.

Ukraine is also dogged by rumors that it provided Azerbaijan with white phosphorus, a chemical weapon that Armenians say was used against them during the 2020 war.

Sarik Andreasyan, a Russian-Armenian film director and personal friend of Zelenskiy, then posted on Instagram blaming the Ukrainian president for selling the chemical weapons to Azerbaijan “in order to strengthen your friendship with them.” Zelenskiy repeatedly denied the claim but the damage to his reputation in Armenia was done.

The rumors have resurfaced in the wake of the Russian invasion, though a fact-checking article on the news website Civilnet found “no evidence” for it other than Andreasyan’s unsupported claim.

A handful of small pro-Ukraine and anti-Russia rallies have been held; the largest, on February 27, was organized by the Ukrainian embassy in Yerevan itself.