Russia had again been complaining about U.S.-funded labs in Armenia. Now Yerevan is cutting off some biosecurity cooperation with the Americans. 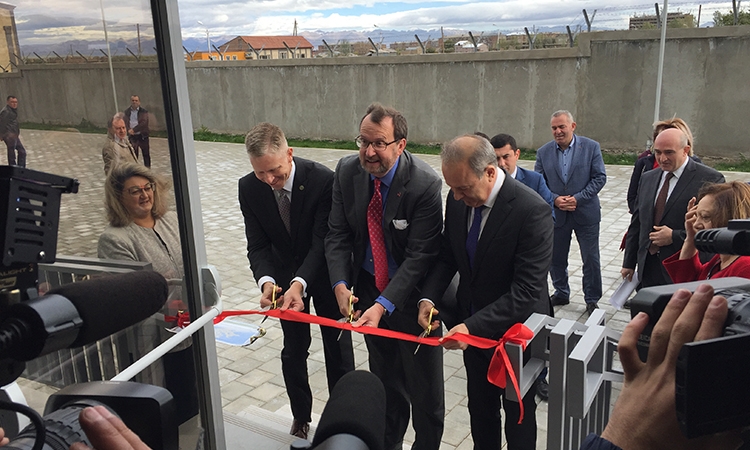 Armenia’s government has said it will no longer share with the United States samples of biological pathogens and data on disease outbreaks, amid a Russian campaign raising suspicions of American biological laboratories across the post-Soviet space.

On June 2, the government announced that it was amending a 2010 agreement between Armenia and the United States on "Cooperation in the Area of Prevention of Proliferation of Technology, Pathogens and Expertise that Could be Used in the Development of Biological Weapons."

In Article IV of the agreement, the government noted in its decision, Armenia was obliged to “provide the U.S. Department of Defense with samples of dangerous pathogens discovered in Armenia.”

But now Armenia is working on a “Comprehensive Law on Biosafety,” in which ”it will be clearly stated that the Armenian side is not obliged to provide samples of pathogens to any state.” Further in the document, it says that the decision was made “out of the need to ensure a balanced policy with partners in the field of biosafety and international cooperation.”

The U.S. Embassy in Yerevan had not responded to requests for comment by the time this piece was posted. Calls to the press office of Armenia’s National Security Council went unanswered. Article VII of the 2010 agreement allows either side to unilaterally amend or cancel the agreement with 90 days’ written notice.

It’s not clear what motivated the decision, and government officials have not commented beyond the official notice.

But it comes as Yerevan has been fighting back accusations from Moscow that it may be harboring secret American bioweapons facilities.

Over the last several years the U.S. has funded the renovation and construction of a series of biological laboratories across Armenia, several in regional centers linked to a central lab in Yerevan. They are primarily “designed to track, monitor, and fight infections,” the U.S. Embassy has said, and to “help the nation track and secure dangerous pathogens more effectively.”

The Armenian labs are part of a larger U.S. effort to build similar labs around the world, particularly in the post-Soviet space. Russia has long cast suspicion on this network – perhaps most vigorously in Georgia – suggesting that what the Americans present as merely an effort to prevent the spread of diseases around the world is in fact a secret, nefarious anti-Russian bioweapons program.

The accusations have been coming with even more frequency since the war in Ukraine began. Russia’s ambassador to the United Nations has been particularly vocal on the issue, mostly directed at Ukraine, but not only.

Russian Foreign Minister Sergey Lavrov, in a May 23 interview, listed Armenia as one of several sites of United States-funded biological laboratories that were the objects of Russian concern.

"What’s important is transparency that allows us to ensure that these programs do not have a military dimension, as this is prohibited by the Convention [on the Prohibition of Biological and Toxin Weapons],” Lavrov said.

Lavrov said that Russia was in the process of setting up bilateral agreements with several post-Soviet countries allowing for Russia to inspect the facilities. But as far back as 2019 Yerevan and Moscow had signed an agreement allowing Russian officials, including military personnel, access to the Armenian facilities under question.

“The main purpose of this document is to honor the interests of all sides, to make sure that nobody, none of our partners, have any fears about the labs,” Prime Minister Nikol Pashinyan said at the time.

That appears not to have mollified Russia, and Armenian officials now have been expressing confusion about what more Moscow could possibly need to know.

“These issues have been raised before, we have created a working commission [...] to ensure transparency. We have invited Russian colleagues and always were open to discussing any issue, any time. And we are sure that we can address any concern, which should be enough for the context of the raised issues [by Russia],” said the head of Armenia’s National Security Council, Armen Grigoryan, in a May 31 interview with local news website CivilNet.

“Maybe they have more questions, and we are discussing with our Russian partners to answer the remaining questions,” he said. “Based on a memorandum signed between the countries, we are currently negotiating over the execution of the responsibilities taken upon that memorandum,” he said. In 2021, Armenia and Russia signed a memorandum on biosecurity cooperation.

“There are internal discussions in the Armenian government, and soon we will be ready for the final discussion,” Grigoryan said.

Separately, Grigoryan has said that senior National Security Council officials had visited Moscow and “discussed all the existing issues. […] The Armenian side gave exhaustive answers to all the issues these [Russian] specialists voiced.”

Armenia has for the most part taken a low-profile position vis-a-vis Russia’s war in Ukraine. Armenia is a treaty ally of Russia; as members of the Collective Security Treaty Organization the two sides are obliged to come to each other’s defense. Since Russia’s invasion of Ukraine in February, Armenia has provided diplomatic support for Moscow in United Nations votes, but otherwise has tried to keep its head down.